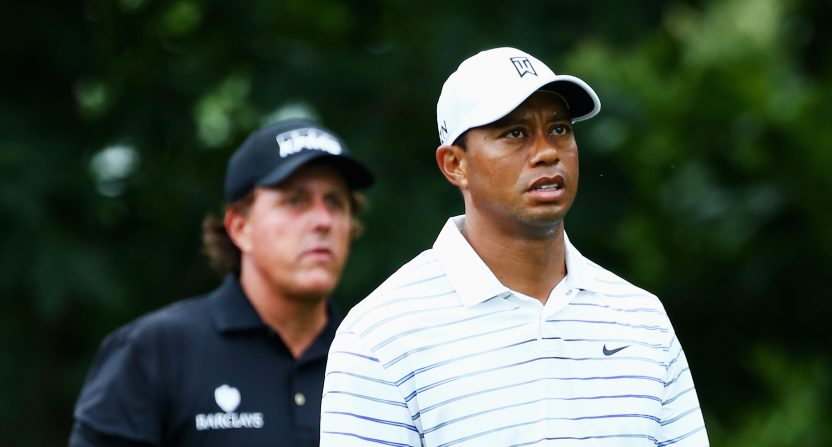 Tiger Woods is making his return to the PGA Tour this weekend at the Safeway Open. And when he tees it up on Thursday and Friday, he’ll have Phil Mickelson alongside him.

Phil has long been Tiger’s only rival for biggest fan attraction on tour. With both men committing to play the Safeway in Napa Valley, technically the first event of the 2016/2017 PGA Tour season, the Tour decided to give the people (and Phil) what they want, according to multiple reports.

Ron Kroichick of the San Francisco Chronicle had it first:

The PGA Tour doesn’t release pairings until Tuesday of tournament week, but a source told The Chronicle that Woods and Mickelson will play in the same group Thursday and Friday at Silverado Resort. Mickelson lobbied for the pairing, publicly saying he wanted to play with Woods.

“I’m hoping we can get paired together,” Mickelson told espn.com Sept. 7. “That would be really fun. I would love it.”

Woods and Mickelson probably will tee off Thursday afternoon, so Golf Channel can carry Woods’ first shot in a tour event in more than 14 months. Woods and Mickelson then would play in the “morning wave” for the second round Friday.

Mickelson has long loved playing with Tiger; his motivation for non-major, non-Ryder Cup golf is limited these days. Woods might not be as keen on the spotlight, as he hasn’t played since August 2015, at the Wyndham Championship. That absence has taken a toll on his world ranking:

With the OWGR reconfigured this morning, Tiger Woods will make his return to competitive golf this week as the world's 786th-ranked player.

It’s incredibly rare for Tiger and Phil to be paired together during the opening rounds of a Tour event. On the weekends, pairings are set based on the leaderboard, so they’ve played more often then. For Thursday and Friday, the Tour has tended to keep them apart, both for crowd control at the course (each draw massive galleries) and for television purposes; giving one an afternoon round on Thursday and the other an afternoon round on Friday, to ensure someone of interest is always playing during the television window.

But if you’re looking for the last time a regular PGA Tour tournament featured the two intentionally paired together, you’ll have to go back a while:

Re: Tiger/Phil pairing. PGA tour has kept them apart aside from WGCs/playoffs/majors. Not been paired 1st 2 rds since '98 Nissan Open.

In his report confirming the pairing, ESPN’s Bob Harig noted another juicy pairing, this time for Wednesday’s pro-am round:

The tournament also announced that one of Woods’ pro-am partners on Wednesday will be Golden State Warriors superstar Stephen Curry, who is known to have a strong game on the course, too.

Who knew the Safeway Open would be so star-studded?

Tiger’s game remains a mystery, and it’s probably wise to keep expectations low for his return, as he attempts to accumulate tournament rounds while maintaining his health. He’ll likely play a few fall events, then return early next year for a few tournaments as he builds towards the Masters in April.