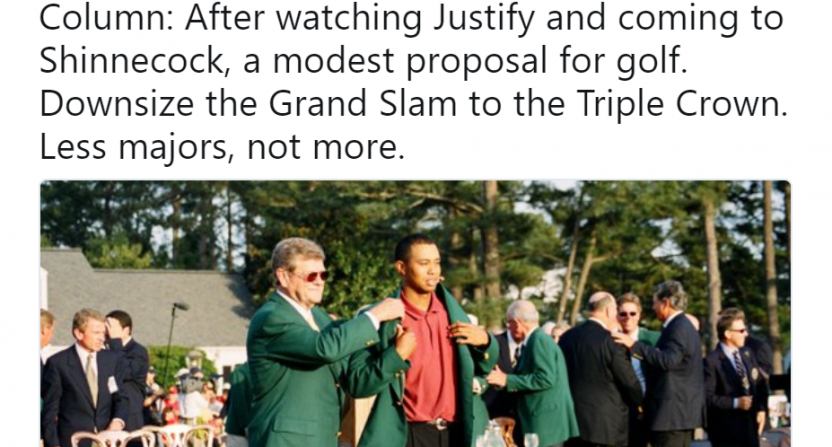 But with the U.S. Open about to start tomorrow at Shinnecock Hills on Long Island, it’s going to be a bigger part of the national sports conversation than it normally is throughout the weekend, and with the NBA Finals complete and interest in the World Cup somewhat muted, it’s a big week for golf. But with that increased national attention comes with a cost: the interloping national writer dropping by to sample the USGA’s media center spread and troll as hard as possible.

That’s normally harmless, but every once in a while we get some comedy gold, and this year it’s via Yahoo’s Pat Forde. Pat just came from covering Justify’s win at Belmont, but you probably could have figured that out from this headline:

Column: After watching Justify and coming to Shinnecock, a modest proposal for golf. Downsize the Grand Slam to the Triple Crown. Less majors, not more. https://t.co/C9ke1l2MPJ

It makes you wonder what would happen if Pat went from covering Nathan’s Hot Dog Eating Contest to the British Open, doesn’t it? “But rest assured, the fun doesn’t stop with the headline. Instead, it continues thusly:

Patrick Reed fielded 16 questions at his pre-U.S. Open press conference Tuesday. None of them pertained to trying to win golf’s Grand Slam.

The Masters champion is the only guy in 2018 with a chance of winning all four majors, yet nobody bothered asking. Because Reed really has no chance at all, and everyone knows it.

Well, no, it’s actually because “going for the Grand Slam” isn’t really a thing, and never has been. And also, weren’t you there? At the press conference? Couldn’t you have asked about it? I’ve been to USGA press conferences, you just have to ask for a microphone. They’ll give it to anyone.

Golf’s calendar-year Grand Slam is all but impossible. It’s been accomplished one time, by Bobby Jones in 1930, when the slam consisted of the U.S. Open and Amateur and the British Open and Amateur. Golf at the time consisted of a few Americans and western Europeans playing in neckties.

Tiger Woods accomplished the non-calendar Grand Slam, winning the U.S. Open, British Open and PGA in 2000 and the Masters in ’01 to hold all four titles at the same time. That’s the only other time the slam has been completed, and it was the greatest stretch in golf history. But it didn’t happen in the same year.

Thus the very concept of a single-year Grand Slam is basically useless.

Yes, it is! You’ve nailed it! The whole thing is never seen as a realistic possibility because winning majors in golf is impossibly, unimaginably difficult! Phil Mickelson only has five majors for his entire career, so yeah, the idea of someone winning all four in one calendar year is pretty silly, and anyone who thinks about it as something people strive to do, or as an annual chase people want to follow, is pretty clearly misguided. Unless you just watched Justify win a Triple Crown, that is!

But quests for legendary greatness are fun. I just finished covering Justify winning the thoroughbred racing Triple Crown, and it dramatically enhanced interest in that sport – as it did when American Pharoah won the Crown in 2015. And just having the possibility of a Triple Crown heading into the last leg spikes the interest of casual fans.

Well, sure, the only reason people have cared about horse racing for like fifty years is because of the Triple Crown, and the only reason it was a big deal in 2015 was because it hadn’t happened for forever. Surely there’s not going to be an attempt to use horce racing as a guide for any other sport at all in 2018, right?

I’ll pause now to allow the golf purists to howl in outrage, rend their logo-festooned garments and gnash their capped teeth.

(And to phone in another rules violation on a Tour player that they spotted on TV from their couch.)

Listen, you can go read it for yourself if you want to, but you’re probably getting the gist of it by now. (Though I’m partial to the acknowledgement that it’ll never happen in tennis now, when it’s actually much harder to do it in golf than tennis in 2018, and it’s definitely not easy to do it in tennis.)

Reaction to this column has been priceless and predictable: suggest changing a sporting construct that last was accomplished 88 years ago and it's more evidence of making America (and golf) SAWFT. Enjoy! https://t.co/C9ke1l2MPJ

Here’s the main point: no one who knows anything about golf goes into every year thinking “Oh wow, I wonder if we’ll have a Grand Slam winner!” That’s never been the case; it’s why Bobby Jones doing it was such a big deal to begin with, and why Tiger holding all four majors at once, albeit not in a calendar year, was such an anomaly.

It’s not supposed to be possible, and when someone manages to pull it off or come close, it’s like we’re witnessing golf’s code breaking down, seeing players glitch into areas of levels that are supposed to be off limits. To think that’s something that golf should attempt to manufacture is either some A+++ trolling or some very lazy thinking.

Either way, it’ll be nice when we get actual golf tomorrow on Long Island, if only so some members of the media can get back to what’s most important: chronicling the traffic snarls in and around the course.

The "news" at Shinnecock is soul-crushing traffic, which delayed some golfers getting to the course. Long Islanders seem to go through four daily stages: battling traffic, complaining about battling traffic, planning how to outsmart the traffic, having nightmares about traffic.