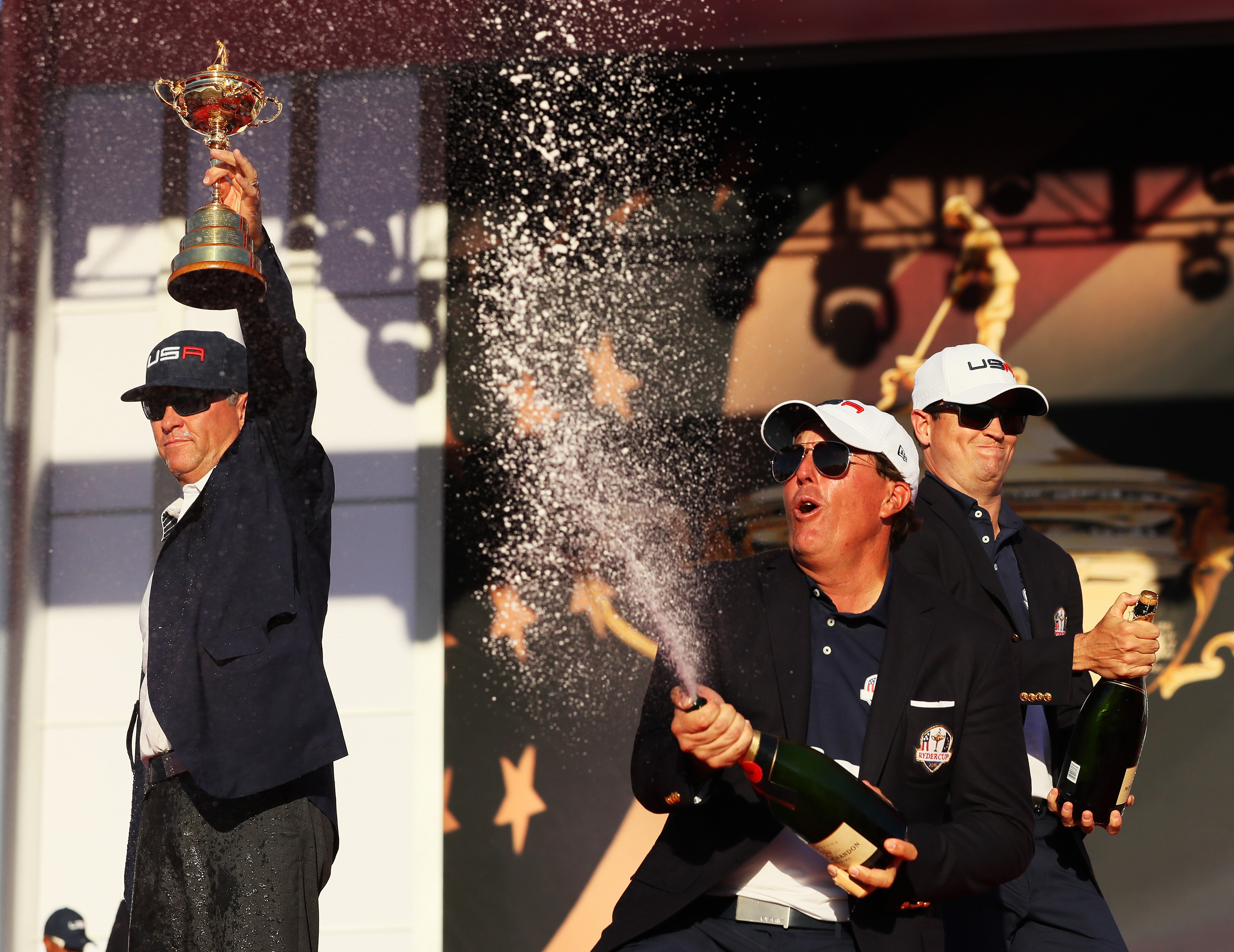 That was so much fun. Golf gets written off as stodgy, boring, and Dad’s weekend nap-time entertainment. And sometimes, sure, that’s the case. There’s nothing wrong with using the third round of the Northern Trust Open as white noise to aid a February snooze.

But the Ryder Cup is something else entirely.

If you need an example, well:

That’s not happening at the Wyndham Championship.

Why does this happen?

A mix of a few factors. National pride, for one. Crowds packed in to watch fewer players on the course, meaning they’re more amped and/or liquored up when the action finally hits their hole. And perhaps most of all, the match play format, which lends the proceedings an air of gladiatorial combat.

The United States were favored heading into the event and Sunday, they handily defeated the Europeans, winning by a final score of 17-11. That sounds routine, but of course it’s important to remember that from 1995 on, the Americans had only won twice. For perspective, until Sunday, Jordan Spieth had only seen one Ryder Cup after the age of six.

There are myriad reasons behind the American victory, but there are three players who were key to the process and the potential future success of the team.

Reed is built for match play. Everything about his personality works better in the format, where his adversarial nature more closely mirrors the game at hand.

Well, remember that Rory video from above? Here was Patrick Reed’s response to Rory’s birdie:

Reed was the MVP of the American team. He and Jordan Spieth played in all five sessions, the only Americans to do so, and Reed carried Spieth to a few of their team wins. He has the perfect mentality, and clearly gets fired up for the event, as this early week example demonstrates:

Reed walked into a team meeting Sunday and told Love that he's playing all 5 matches, and he's only playing with Spieth. Not making this up.

Reed won 3.5 points from his five matches, including an enormous win over Rory to lead off Sunday’s singles. A trailing Europe was forced to frontload their Sunday lineup, and the USA answered with their hottest player, and the player least likely to shy from the moment. And he delivered. He’s only 26, and even if he fails to qualify for the next Ryder Cup (unlikely, but you never know), if he’s breathing he’s essentially a lock to get picked for the team.

But despite the theatrics and legitimate excitement of Reed vs. Rory, it wasn’t actually the best match of the day.

Mickelson was a driving force behind this team. Much was made of his role in the task force following the 2014 debacle, but really all he did was use his wattage to help push through a system similar to what Europe has done for a long time. But he knew he was putting a target on his own back by doing so. No one would have suffered more criticism if the United States had lost than Phil. And at 46, there’s always the chance that it was going to be his last Ryder Cup as well, God forbid.

Did that pressure get to him ahead of his Sunday match with Sergio Garcia?

Well, maybe, but if it did it wasn’t apparent in his play. He and Sergio combined for 19 birdies between them, including a pair on the 18th that halved the match.

Phil even reprised his 2004 Masters leap:

A birdie…and a LEAP from Phil Mickelson!

He halves the match with Sergio Garcia!

And then answered a question about whether it was higher than at Augusta, and what other activities he does that involve leaping:

Did Phil jump higher today or back when he won the Masters?

The world needs to know!

Mickelson had a lot at stake and though he is up there, if they really can build upon the success they found at Hazeltine, he’ll deserve a great deal of credit for being a catalyst to change. One of those changes resulted in the next player’s inclusion on the team.

Ryan Moore swore as recently as Saturday night of the Tour Championship that he thought there was no chance he’d be on this team. He’d gone through years of close calls, or no calls, when it came to Ryder Cup and Presidents Cup events. At 33, after a dozen years on tour, he played his way onto the roster via a new rule, instituted as a part of the overhaul kicked off by Phil Mickelson’s comments. Prior to this season, the captain’s picks for the team would have been made weeks ago, Moore’s gutsy duel with McIlroy wouldn’t have mattered.

But instead, he was there. And not just there, but earning his share of points. He and partner J.B. Holmes secured a key point late on Saturday, though Holmes (and Lee Westwood’s yippy putter) did a lot of the heavy lifting. Sunday, though, matched up with Westwood in a singles duel, Moore found himself two down with three holes to play. What happened next?

Well, first he just stuffed a 240+ yard hybrid on 16, reaching the par 5 in two and leaving himself this putt for eagle:

Ryan Moore with the EAGLE!

And then he stuck it close on the par 3 17th, leaving himself this putt for birdie to level the match:

And then calmly stuck this wedge on 18:

And due to a variety of events both in front and behind him, Moore was left in a position where he could clinch the Ryder Cup. Ryan Moore, the last man on the team, a spot many expected to be filled by Bubba Watson. What a moment for him:

Here he is thanking and hugging Davis Love after the victory, which you can also see in that picture above:

That’s just a great moment for a player like Moore, who’s never sought out the spotlight. He’s regarded as quiet and friendly, but as he said at his opening presser, he doesn’t play golf to be buddies with other guys. He’s proven to be engaging, funny, and obviously a clutch player this week. Hopefully, Moore will be considered for more American teams going forward.

Oh, and there’s this:

When daddy clinches the #RyderCup

Just @JBHolmesgolf and I driving home with the Ryder Cup. #NBD

If you need another example of the kind of guy Moore is, here’s one. At the press conference, Davis Love told a story about how when he sank the clinching putt for the Americans at the 1993 Ryder Cup, he began to celebrate before retrieving the ball. He forgot about it entirely, and never did get it back.

When Moore’s putt was conceded, he walked off without retrieving the ball. Love noticed that and quickly walked onto the green to grab it, later presenting it to Ryan and telling him the story.

Moore gave it back, telling Love that he should have it instead.