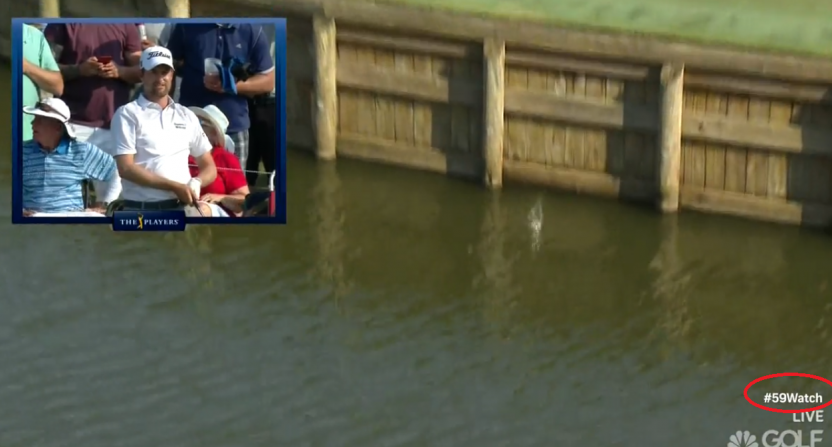 The Players Championship is ongoing, which means we get four days of the world’s best golfers attacking a challenging but generally fair Pete Dye course that features one of the most famous holes in golf, the island green on #17.

Though not everyone is impressed with it:

"Do you guys want me to take it the other way? With one of the most famous holes in the world in the background?"

"No just in front of this white tent is fine" pic.twitter.com/QN2GA1AH5D

Webb Simpson has struggled slightly since his preferred style of anchored putting was banned a couple of years ago, but over the last year or so he’s remained near the top of the sport. He has four wins as a pro, but one of them was the 2012 U.S. Open, and he’s back to 41st in the world. After the ban went into effect at the start of 2016, Simpson spent the entire year ranked no higher than 61st, and he was ranked as low as 89th in the world as recently as the start of 2017.

But he’s seemingly figured something out of late, never more obvious than his blistering second round today at TPC Sawgrass. After playing the front nine in 31 thanks to three birdies and an eagle, Simpson reeled off six straight birdies on the back from 11-16, finishing off with a deceptively tricky short putt on the sixteenth:

That meant Simpson was sitting at -11 for the round. The course record at TPC Sawgrass is 63, shared by multiple players; if Simpson could have managed a two par finish, he’d have shot a 61 for a new record. But the island green at #17 is famous for a reason; obviously there’s some gimmickry there, but it’s also just a wedge for pros, and a great example of how psychology and the visual elements of a hole can wreak havoc on players.

It got Simpson, too, and in some ways, in a more painful fashion than if he’d just shanked one into the water (always a possibility with Webb, whose swing lends itself to a good shank now and then.) That NBC had cued up the #59watch in the bottom right of the screen didn’t help matters, either.

That thud off the boards is an underrated sports sound, right up there with the upright doink or a puck pinging off the bar. That it still could have theoretically stayed on the green was even worse.

Here are a few more looks:

Simpson then went to the drop zone, which isn’t even necessarily an easier shot, given the half-wedge distance and different angle. Indeed, it wasn’t exactly a perfect result for Webb:

After a two-putt double on 17, Webb rebounded for par on 18, finishing with a record-tying 63, and a five-shot lead heading into the weekend. After the round, Simpson reflected on the shot, saying it was the wrong club.

A five-shot lead is better than not having a five-shot lead, but it’s certainly not safe; the field is even deeper than the water at #17, and the weekend should be a lot of fun.