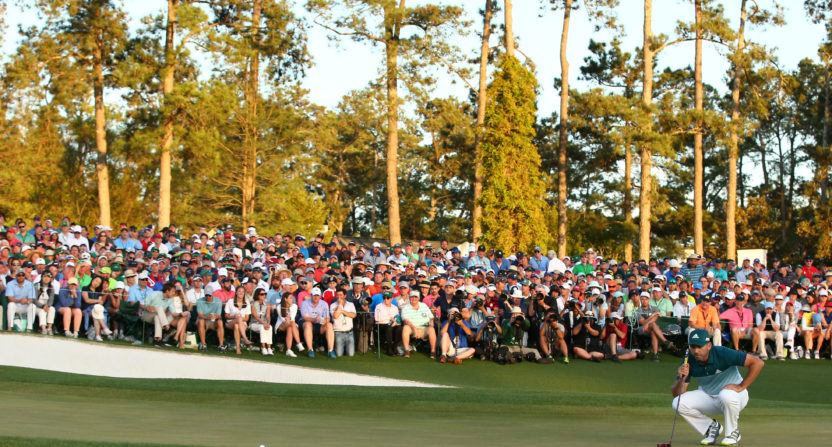 Fan behavior at golf events has been a hot topic of late, especially after a few high profile incidents of players having fans ejected for negative behavior. Augusta National is perhaps the strictest place in golf when it comes to fan (sorry, patron) activity; it’s the last place you won’t see phones in hands, for example.

So while we were never likely to see the kind of behavior that angered Justin Thomas a few weeks ago, it should come as no surprise that the folks at Augusta are cracking down even further, going so far as to ban patrons from yelling “Dilly Dilly.” If you’re unfamiliar, please stop reading now, because you live a better life than I do and to read further would only contaminate your sensibilities. It’s the stupid Bud Light slogan, obviously, and of course golf fans would co-opt that in place of “Mashed potatoes!” and what have you.

Just been told security staff at Augusta National have been handed a sheet with a list of sayings that are prohibited. I'm told "dilly dilly" is one of them. Patrons who shout out these phrases will be "removed" immediately. #themasters

I have no clue what 'dilly dilly' means, by the way. Not a scoobie.

First of all, everything in that second tweet is a great example of why British English and slang is way more fun. Second of all, this is good! Why not ban it from everywhere? If somehow it was a choice between maintaining a staunch defense of the First Amendment and allowing anyone who says “Dilly Dilly!” to be executed, I’d honestly have to think long and hard about where my ideology lies.

In response, Bud Light is sending 1,000 “Dilly Dilly” shirts to Augusta which might actually be worse to those at Augusta National because the company is now endorsing this and is trying to advertise by dressing a thousand patrons. And advertising, especially ambush marketing such as this, is something Augusta doesn’t do.

Our King weighs in on the Dilly Dilly ban. pic.twitter.com/rVxrD5dsNf

Augusta National has many flaws and faults. Banning this stupid phrase is not one of them.