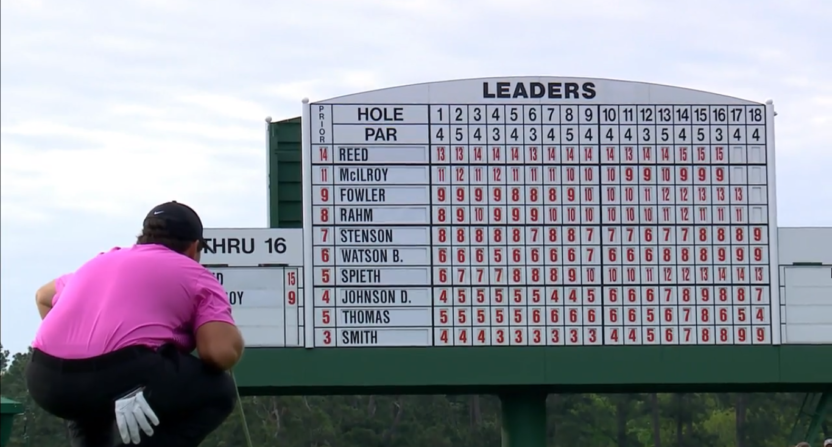 Golf has long been viewed as a sport (sometimes not even that) played by middle-aged middle managers looking to get out of the house on weekends. The perception filtered over to the professional level too, and for a long time it wasn’t unwarranted.

Sure, guys like Arnold Palmer and Jack Nicklaus were clearly world-class athletes. But looking back to the 1990s on the PGA Tour is like looking back in time, with plenty of Jeffs (Sluman, Maggert, etc.) grinding out lengthy careers near the tops of leaderboards despite looking like accountants. Now, watch any broadcast featuring Dustin Johnson and you’ll be sure to hear how he can dunk a basketball. (Golf broadcast factoid bingo would honestly be too easy; they must read the same cards every week.)

And more than that, the tops of leaderboards are getting stacked with youth. That hasn’t always been the case.

Patrick Reed is many things, and opinions of him tend to vary wildly, but two things are certain: He’s the Masters champion, and he’s only 27 years old. In fact, take a look at the ages of the current four major champions:

The four current major champions, their age, and nationality:

The nationality is certainly something (especially in a Ryder Cup year, which is what No Laying Up’s adorably Ryder Cup-crazed Chris Solomon is getting at there), but Americans have been good at golf for a long time. The youth is the real astounding part there. And the top of the world rankings tells a similar story: seven of the top 10 players in the world are 30 or younger. Eleven of the top 15, as well.

That was especially apparent on Sunday at Augusta, a tournament that had seen most of the pre-tournament hype dreaming on the potential for a return to Masters glory for Tiger Woods or Phil Mickelson. Instead, the Sunday narrative was entirely driven by players in their 20s.

Reed emerged on top, holding off clutch play by Rickie Fowler (29, with too many close calls in majors to track), a furious charge from Jordan Spieth (24, three majors), and the exuberantly aggressive play of Jon Rahm (23, already #4 in the world). Those players finished 1-4, and drove the narrative for one of the most exciting golf final rounds in recent memory.

Oh, and Rory McIlroy (28, four-time major winner) was there too, sort of. McIlroy had a pretty great chance, all things considered, but he seemed disinterested and out of sorts from the opening swing, a blocked drive that forced an incredible par save. He rushed shots and putts all day, despite Reed not exactly slow-playing him, and while it may have been an attempt to stay loose, it came off as a player who couldn’t wait to get out of there. It was weird, given Rory’s resume.

The final top 10 also included Aussie Cam Smith (24) and apparently indestructible American Tony Finau (28). It was a watershed moment, and one that has been coming for a long time now. There are a few reasons for it, too, but it’s hard to imagine Tiger Woods not being a defining factor.

When I talked to NBC and Golf Channel host Mike Tirico last week ahead of the Masters, he brought up this very point, which looks prescient now:

If you look back, people thought Tiger’s win in 97 was going to change the game. And I think it did. Many of us thought it would bring more minorities to the game. I contend that it brought more athletes to the game. It made golf cool.

And now, if you look at the average height and size of major champions in the post-Tiger era, this generation that his success helped spawn? These are bigger athletes you could easily see playing tight end or small forward or shooting guard, or third base. You see a lot bigger, stronger, better athletes now coming to the game. And I think that what’s the Tiger era spawned; golf became cool and golf became a sport for the really good athletes to go to first.

Also, guys were afraid to win. You were supposed to wait your time. I remember when I first started, the average age of major champions was in the mid-30s, or 34, that was the prime of your career. Now we’re thinking Jordan Spieth’s in the prime of his career, he’s still in his early mid-20s. So it’s a changing dynamic.

And it has, and it has for a while now. We take Jordan Spieth for granted, in some ways, but just having played in five Masters by age 24 is an amazing accomplishment. He’s won one already, and he could easily have a few more. That somehow included this one, despite Spieth starting the day nine shots back; he ran off an incredible series of holes, culminating in a birdie on the sixteenth to get to -9 for his round.

If Spieth had finished par-par for an Augusta record-tying 63, it would have been one of the best rounds in the history of golf.

Unfortunately, he somehow managed to tug his drive on 18, clip a tree, and miss a very short par save. In the end, had Reed’s round played out the same way, Spieth would have still come up one shot shy. But it was a nice reminder that Jordan has a gear few others possess, especially on the big stage, and especially at Augusta.

Fowler, meanwhile, has been plagued by a lack of Sunday success at majors. A fan favorite, he still seems more likely to win multiple majors than to win none, and yesterday’s round went a long way towards showing why. Rickie made putt after putt down the stretch to keep the pressure on Reed, none moreso than his gutsy birdie at the last, which had all the pressure of winning a major even if he didn’t end up with the jacket:

Fowler is going to graduate from the under-30 club this year, but he’s essentially a fixture at the top of major championship leaderboards, regardless of venue. He’s going to win, and he might get one as soon as the U.S. Open at Shinnecock in June. He’s also a lock for the Ryder Cup team for this year and for years to come.

And despite all of that, even at 29, Fowler still gets critiqued for not having broken through at a major. That’s not entirely new, of course; Phil Mickelson took plenty of heat as well, long before he won his first Masters at age 34. But it’s clearly a different era now.

Patrick Reed is very much of this era, and he’s shown up on big stages, leading the United States to a decisive Ryder Cup win in 2016 (having been one of the lone bright spots on the 2014 roster, as well.) Reed is not a conventional personality, and has a tabloid-ready estranged relationship with his family (who are all too willing to talk to the media about it, which doesn’t exactly help their case when they say they’re not trying to leech off of Patrick’s success.)

Reed also fails to make it easy on himself, with a preternatural knack for saying something controversial, whether it’s about his Ryder Cup partner Jordan Spieth or his former equipment techs. Reed’s also only recently started to show up on the leaderboards at majors, despite having been a brand name in golf for some time now. (Prior to his win yesterday, his only top ten in a major was last year’s PGA, where he finished tied for second.)

But he didn’t wilt yesterday, despite sleeping on a three-shot lead, and despite seeing that lead shrink to one shot after just two holes. Fowler’s birdie on 18 forced Reed to par the last, which he did fairly comfortably, all things considering.

Reed is now a major winner, and clearly a world-class player, deserving of his ranking. (Which only went up to 11th, thanks to the vagaries of the world ranking system.) We haven’t even talked about world #2 PGA champion Justin Thomas (24), U.S. Open champ Brooks Koepka (27, 9th in the world) or Japanese star Hideki Matsuyama (still only 26, ranked 6th in the world, and along with Fowler and Rahm one of the likeliest next first-time major winners).

Golf is younger than ever, golf is more athletic than ever, and as we saw yesterday, golf can be more entertaining than ever.