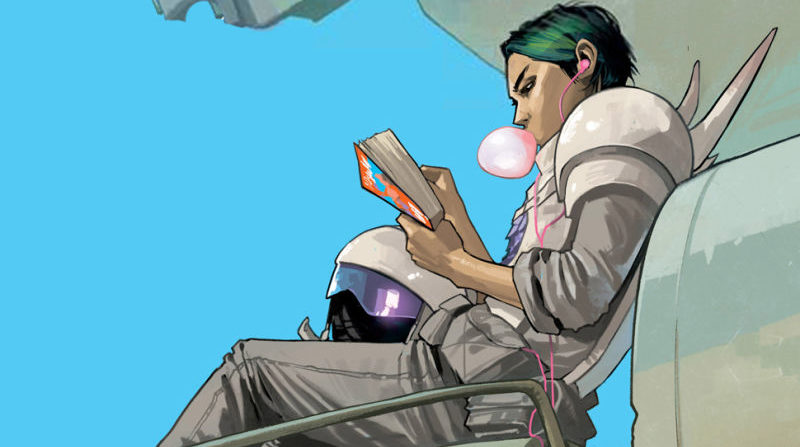 Will there ever be another TV show like Game of Thrones? Jeff Bezos certainly hopes so. As the Amazon CEO expands his empire into grocery stores and new headquarters, he also has his sights set on turning Amazon into a powerhouse player in the world of prestige TV.

So far, Amazon Studios has produced some highly regarded programming, such as Transparent, The Man in the High Tower, Mozart in the Jungle, and Catastrophe. However, all of those shows continue to exist on the edge of water cooler status. Transparent is on the downward slide, Man in the High Castle watched as Hulu’s The Handmaid’s Tale stole its dictatorial thunder, and Mozart in the Jungle seems to exist to please critics more than audiences.

What Amazon doesn’t have is “event” television. People don’t count the days en masse until the next season of an Amazon show drops. Their shows don’t top the trends on Twitter. Outlets don’t line up to write think pieces about what the latest episode of their shows mean. And Bezos has noticed.

Amazon Studios chief Roy Price told reporters recently that Bezos and other senior Amazon officials have made it very evident that they want to see the company grab attention and demand the kind of fawning interest that a show like Game of Thrones produces. So if HBO’s swords and magic extravaganza is the model on which Amazon wants to base its own success, where should it look for inspiration?

Since Game of Thrones is based on an epic book series, let’s look to the literary world to see what sprawling sagas might be the right kind of stories for Amazon to turn into must-see TV.

If you want to take the challenge of finding the next Game of Thrones literally, you could try to do an adaptation of one of the most beloved fantasy series ever written. They involve strange masses of land (an archipelago of hundreds of islands), magic, civilizations made up of people from varying cultures, backgrounds, and races. The story’s Taoist philosophies mix with Greek myths and much more to create a world that was tailormade for CGI spectacle and sweeping storytelling.

It’s been done before, and badly. The Syfy channel created a three-part miniseries back in 2005 that was so bad Le Guin disavowed it. If the rights can be purchased, Amazon could make good on this series’ potential.

The Clockwork Century by Cherie Priest 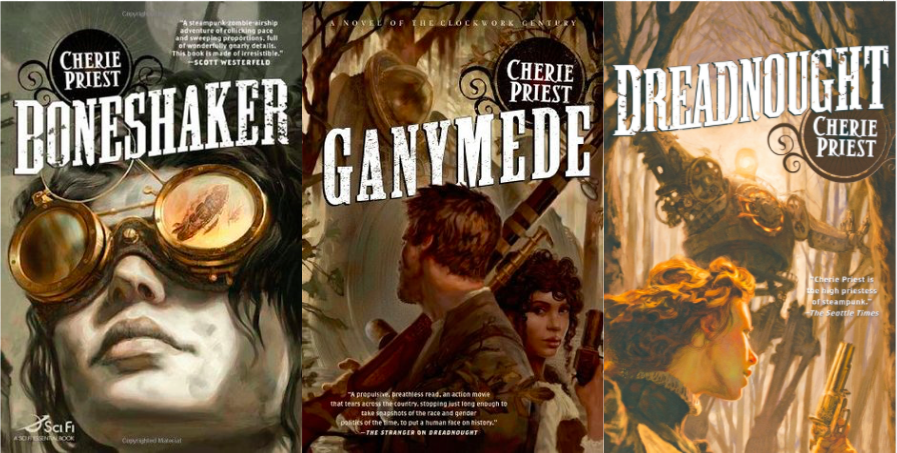 It’s the 1880s. The Civil War still rages on thanks to, among other things, the involvement of Texas. The decades-long war has led to the creation of new technologies, often with terrible purposes. The skies fill with dirigibles. The waters contain secret warcrafts. And a drug epidemic is changing those who become addicted into… something else.

Oh, and did we mention that the frontier city of Seattle is walled off from the world because it’s full of a mysterious gas that turns people into zombies? Cause that’s a thing, too.

The eight books (and various short stories) of Cherie Priests’ Clockwork Century often work as standalone stories, but they all tie together eventually as characters overlap and the steampunky, alt-history story culminates. What would be fantastic about a TV adaptation is that, unlike in the books which tell succinct stories one at a time, you could have all of the events of the books happen concurrently and weave together an exciting narrative that’s one part Gettysburg, one part Game of Thrones, and one part The Walking Dead.

There’s also the added bonus that most of the stories involve strong female characters as leads. 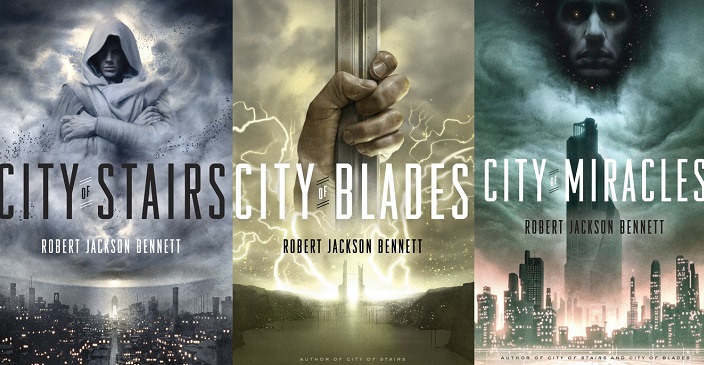 There was a time when The Continent ruled over the people of Saypur thanks to the many deities who roamed the land, protecting its people. Then the Saypuri fought back and now the gods are gone and now Saypur is the nation in charge. The setting of the series puts us in the middle of the industrial rebirth of a fallen empire when we’re introduced to spy Shara Komayd and her companion/henchman Sigrud. The two of them are thrust into the middle of a vast conspiracy and from there, the series introduces us to the various people, places, and gods who influence what has happened and what’s to come.

The third book in the trilogy was recently released and ties a bow around the entire saga, giving us a solid endpoint to work towards. The story not only moves forward in time as we watch this conquered nation rise from the ashes, but we also get a great sense of the political, military, and capitalistic machinations behind the scenes that give the fantasy and magical elements so much more weight. 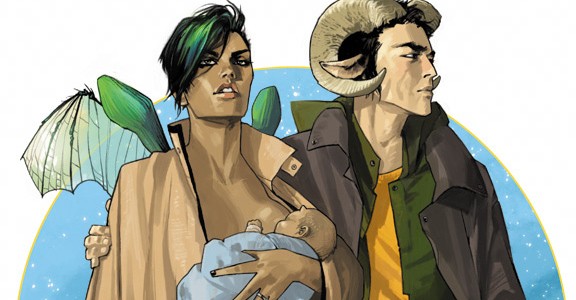 People have been calling for Saga to be adapted ever since the graphic novel was first published. It’s easy to understand why as the story of two star-crossed lovers from warring alien factions is not only fantastical, but also grounded in a way that anyone can get emotionally involved. The backdrop is Star Wars-esque but the story itself delves into issues like addiction, domestic abuse, and oppression, making it all the more relatable and real. Because the story is narrated by Hazel, the daughter of husband and wife Alana and Marko, that adds weight to the unknown outcome ahead.

Vaughan and Staples have said on multiple occasions they have no desire to see Saga turned into a movie or TV show, but never say never. Especially when “Amazon money” is in play.

Often cited as an obvious choice for adaptations, The First Law books introduce you to very flawed, unlikable characters doing very unlikable things. And yet, the characterizations and developments that unfold make you root for them anyway.

The characters range from a military officer to a barbarian to a torturer and drop them into a world full of magic and moral ambiguity. The plot twists and turns in a way that’s perfect for a TV show, especially powerful if the show can match the scope and look of the world within.

The Kingkiller Chronicle by Patrick Rothfuss 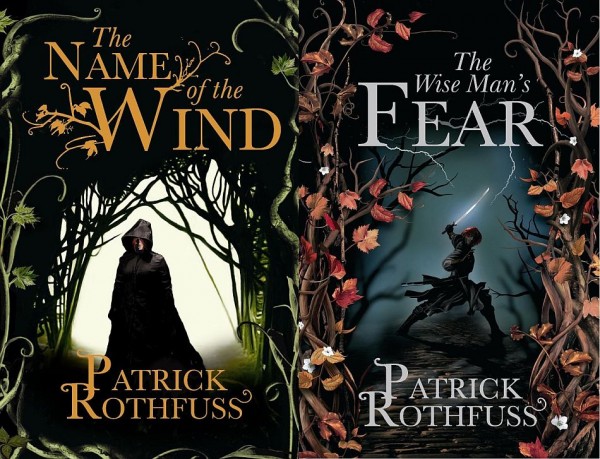 Planned as a trilogy, only the first two books exist right now (The Name of the Wind, The Wise Man’s Fear) so Amazon would have to take a George R.R. Martin-like gamble to invest in it. But it would still be worth it to see the regretful tale of Kvothe be told.

It’s the story of one man’s rise from poverty into becoming one of the great magicians the world has ever seen. The fact that our narrator is in such a sad state leaves us desperate to know what happens and tinges every success with a note of sadness ahead. And then there are the interactions between him and Chronicler, who is recording his account.

There are also a collection of short stories that could be integrated into the plot, should the TV show want to venture out. Rothfuss has also intimated that it’s possible there will be more stories about the world outside of those told by Kvothe.