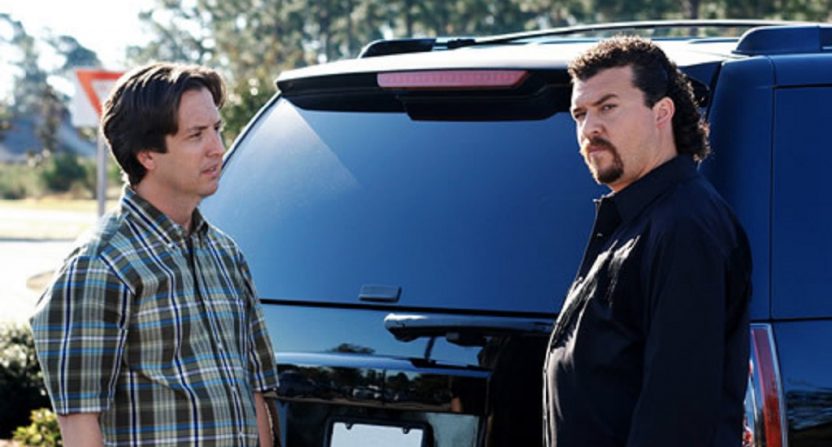 Filthy, offensive, and absolutely funny. HBO’s unapologetic raunchy comedy series Eastbound & Down made its debut in February 2009. While it might not feel that long ago, bear in mind that the first season has flip phones, cassettes, and a newspaper delivery boy.

Before Eastbound & Down, McBride was known for his supporting roles in Tropic Thunder and Pineapple Express. With the backing of HBO and the support of co-producers Will Ferrell and Adam McKay, McBride pushed the limits of what you thought a comic antihero could be: “Am I supposed to laugh here? Is it okay to laugh here? Will I get punched square in the face if someone sees me slightly chuckle?”

Comedy — and any effective show — needs conflict. Eastbound & Down would not be as memorable, intriguing, or hilarious if McBride didn’t make you feel slightly uncomfortable. Powers could’ve been loathsome and boorish, but it’s comic genius that McBride made him something a lot more interesting.

Powers sported a ridiculous look: a mulleted, dressed in all black with snakeskin boots, looking like a bloated Johnny Cash. Powers featured a ridiculous oversized personality: every sentence was a profanity-laced crude egomaniacal remark. He sounded straight out of WWE central casting of a wrestling heel. Powers was a walking adult cartoon – and everyone loves cartoons.

People have often speculated that Powers was based on former major-leaguer John Rocker. Rocker — like Powers — pitched for Atlanta, used steroids, and infamously made offensive remarks in a 1999 Sports Illustrated interview. McBride said Powers wasn’t specifically based on Rocker, but admitted that it might have been an inspiration. Regardless, McBride’s interpretation was much more entertaining.

The Eastbound & Down first-season premise was simple. A controversial ex-superstar athlete returns to his North Carolina hometown in shame after squandering his talent. He’s living at his brother’s home. He’s broke. And he’s forced to take a physical education teacher job at… wait for it.. Jefferson Davis Middle School! (By the way, in 2019 there remains a Jefferson Davis Middle School in Jacksonville, Fl. #sigh).

What makes Powers’ version of Dante’s Inferno even worse is that the love of his life April (Katy Mixon) is engaged to his boss – nerdy principal Terrence Cutler (played wonderfully by Andrew Daly). This is about as humiliating as it gets. To keep himself from falling into a deep depressing, Powers still acts like an overgrown frat boy even though his job requires him to be an actual adult. To him, this is all a temporary setback until he can regain his 100-mph fastball and return to the minors. Delusions of grandeur? Maybe. But Powers believes in himself.

One of the funniest moments occurs in Episode 1 when Powers is sitting in his truck. At first, you think you’re hearing a voiceover. Nope. Powers is listening to his own pearls of wisdom from his cassette motivational audiobook: “You’re Fucking Out. I’m Fucking In.” This is one of the best running jokes throughout Eastbound & Down.

Eastbound & Down’s first season was only six episodes because it was originally supposed to be a miniseries. It was so new and different that it became the show everyone talked about.

Tom Shales of the Washington Post wrote that “Eastbound & Down doesn’t just push the envelope: It shoves it right in your face.” He also described Powers as “a cross section of inhumanity, a bumblingly insensitive clod who remains totally oblivious to his own offensiveness.”

Nancy Franklin of the New Yorker called it funny and disturbing: “There’s cruelty and meanness in Eastbound & Down and the show’s creators don’t pander to Kenny or use him just for laughs. The comedy is broad but not freewheeling.”

Not everyone was amused. Tim Good of the San Francisco Chronicle wrote “the series is mostly stupid, frequently unfunny and covers for its lack of original comic material by dropping f-bombs all over the place.”

Funny is subjective. But Eastbound & Down worked primarily because it found an audience. Powers connected with people because he never did anything that felt out of character. Too often in television shows there’s a push to humanize the leading actor.

There is no redemption. Powers’ heart doesn’t grow three times. He stays true to form, making self-serving decisions without regard to anyone else. The best example of that was Powers’ relationship with Stevie. Stevie was an overzealous fanboy who considered himself Powers’ friend. Powers considered Stevie as a useful tool. Nothing more. That’s what made it funny. Eastbound & Down still boasts a 91 percent critics score on Rotten Tomatoes and a 92 percent audience score. It also has an 8.3 rating on IMDb.

Eastbound & Down lasted four seasons, ending November 2013. It turned Danny McBride into a household name and made a strong impact on comedy. It’s one of the best HBO comedies of all-time. You can also make a strong argument that it paved the way for IFC’s critically-acclaimed Brockmire, a show that shares a lot of similarities to Eastbound & Down.

McBride hasn’t been able to equal his Powers character. He did another HBO comedy, Vice Principals, that lasted two seasons (2016-17). It wasn’t nearly as funny, and his character was too similar to Powers. Plus, there was criticism regarding the storyline of two Caucasian men trying to bring down an African-American female principal.

McBride has become a player in Hollywood. He was the executive producer for last year’s Halloween reboot that grossest $159,342,015 on a $10 million budget.

It’s possible that, as an actor, McBride has peaked. That also begs the question: Could a show like Eastbound & Down be successful today? America is a very different place than it was 2009-2013. Many of the characteristics that made Powers amusing aren’t quite as humorous in Trump’s America.

Here’s one Powers quote that sticks out: “Sure, I’ve been called a xenophobe, but the truth is, I’m not. I honestly just feel that America is the best country and the other countries aren’t as good. That used to be called patriotism.”

Eastbound & Down is available for streaming on HBO Go.