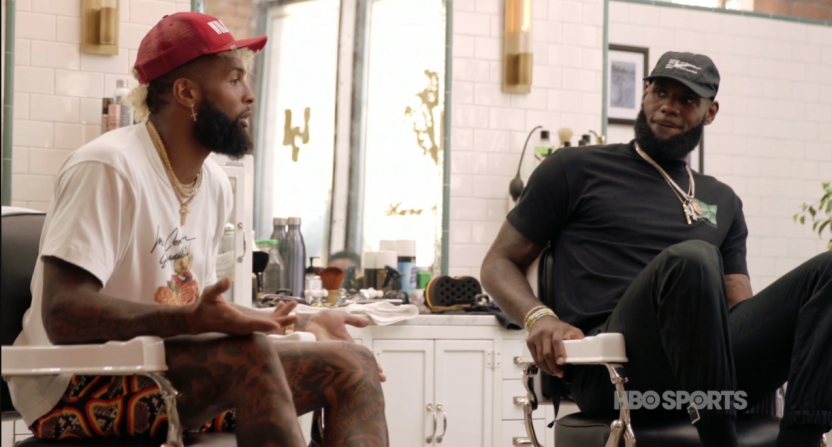 HBO promised a show with “spirited, free-flowing discussions” on important topics, and we certainly got that in the premiere.

Among the many interesting conversations we got in the premiere was one primarily featuring LeBron and Beckham on the topic of fame as a black athlete.

It still ain’t enough. And, and, and that’s for us as African Americans because I believe if the greatest quarterback in the world, he’s a white quarterback, if it’s Brady, if it’s Rodgers, if it’s Manning.

And we’re doing the same shit, the same exact shit, I’m talking about the phone is on. We’re like, ‘Yo, get that fucking phone out of my face. I’m with my family.’ If we’re out with our family, and we say that shit, and somebody posts it, and if Aaron Rodgers or one of those guys say that shit, and they post it, somebody’s going to be like, ‘Hey you guys should respect Aaron Rodgers.’”

LeBron James: “They’re going to say to us, ‘Oh, you guys are fucking dickheads.’”

Beckham then told a story about a recent instance in which he was in a rush and didn’t have time to take a picture with a fan, and was trashed on Twitter.

Odell Beckham Jr: “I had it happen the other day. I didn’t want to take a picture. Like, I’m like I’m really in a rush, I’ve got to go. I get on Twitter, it’s like, oh, yeah, I’m a Giant season ticket-holder for thirty years. I’m like, ‘first of all, you’re twenty something.’

The New York Giants’ star receiver continued, saying that he feels like “a zoo animal” and “puppet” with demands from people.

To me, I be feeling like, I tell people this all the time- I really feel like a zoo animal. Like that’s where life’s gone for me. You know, you used to take your kids to the zoo and we used to be like, you know, I want to see the lions or let’s go see the lions. And you go out there, and the lions are laid out. You know what I mean? And it’s like, why aren’t they doing lion stuff, you know what I mean? Like I’ve got people who call out, Odell! Dance! Like, I’m a show punk, a show monkey or something. Like I’m a puppet, you know what I mean? And it’s like to me, that doesn’t feel good, but it’s like, damn, that’s what life became. But, can you ever really detach from that?”

The Shop is sure to bring much more honest, important commentary, and will “air periodically throughout the year” according to HBO.

4 thoughts on “OBJ sees double standard in treatment of black athletes, tells LeBron on HBO’s ‘The Shop’ that he feels ‘like a zoo animal’”