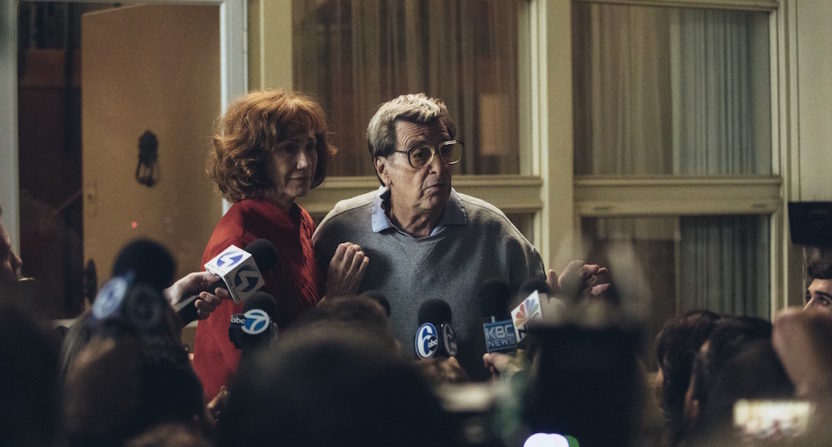 Let’s dive right into this, shall we?

Yes. It’s definitely not in the top tier of HBO original films, but it’s pretty good. I had some concern this might be a rare HBO project that fell flat on its face, but that’s not the case here. It’s a solid film that will probably get lost in the shuffle with all the other amazing work HBO puts out, but would definitely stand out as a success at other networks.

I’d say so, although I’m sure many diehard Paterno loyalists (as well as many still disgusted with the handling of the Jerry Sandusky scandal) will take issue with the film, thinking it is either too condemning or not condemning enough. I think the culpability of Paterno and others was portrayed pretty fairly in the film. However, there are a few scenes that sway the film away from being a tad bit sympathetic to Paterno to insinuating Paterno’s shortcomings intervening were more significant than what’s portrayed throughout the majority of the film.

Is this something I should watch?

I invited a friend who grew up in Pennsylvania to watch this with me. He seemed interested in the film, but steered the evening to more light-hearted activities, like libations, music, and video games, to which he didn’t get much resistance from me. He wasn’t in the mood for the film given the subject matter, and I suspect many viewers and fans may find themselves in a similar position.

Ultimately, this dives deep into something ugly and doesn’t bring anything really revelatory to light in terms of new facts. More so, it doesn’t bring any real clarity or closure to the Sandusky scandal. It’s all still ugly and messy and hard to think about.

I think this really boils down to what perspective you’re coming from, as Paterno has a bit of a narrower appeal as other HBO projects. If you’re someone who really doesn’t know much about the scandal or wants a refresher, then this certainly makes sense to watch. If you’re someone who can stomach unpleasant subject matter and wants to relive the tumultuous end of Paterno’s career and life via a stylized and humanized vehicle, you’ll get what you’re looking for.

OK, I get it…but what did YOU think?

Paterno was a little slow out of the gate. There is a very long extended opening credits sequence which is heavy on football and strong on implications that Paterno’s coaching prowess had all but disappeared at his old age.  Often, you got the feeling that the film was close to making a definitive point about Paterno in many directions: that his old age had rendered him an ineffective coach and obtuse to the scandal that was exploding, that he was overly loyal to Sandusky and Penn State, or that he didn’t have the proper sense of obligation, or (at the very least) that he was overly trusting in his superiors to do the right thing.

But at every point where you start to think the film is about to settle on a definitive narrative, a conflicting point of view is often introduced or strongly presented which ultimately allows viewers to make their own decision on how they view Paterno’s culpability in the Sandusky scandal. I think most viewers will go back and forth a few times on how they feel about Paterno during the film.

Al Pacino’s portrayal of Paterno is alright. Visually, it’s believable. However, Paterno’s unique voice is something Pacino doesn’t make much of an attempt to mimic. You’re basically hearing Al Pacino’s voice which is so distinct and different than Paterno’s, and there is very little illusion to the viewer. 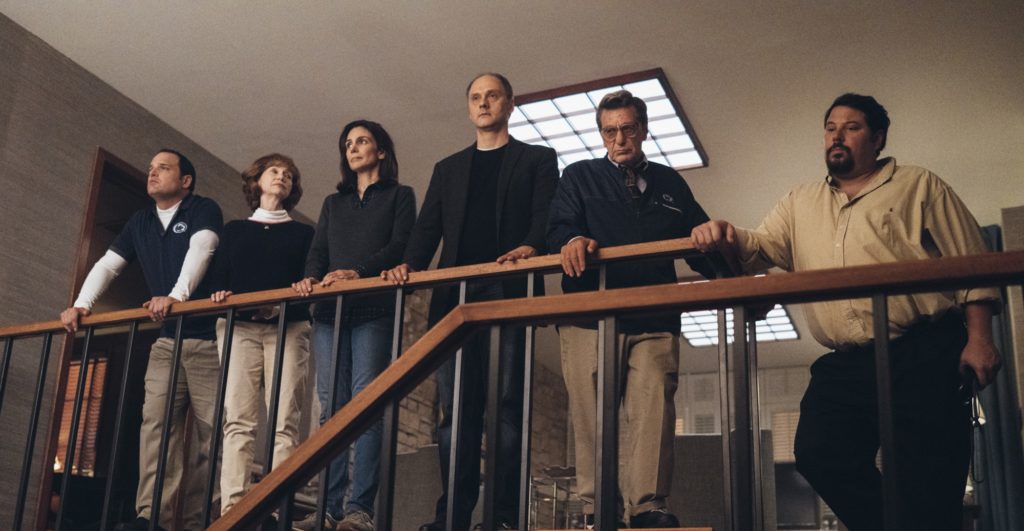 The film almost exclusively focuses on the two week period when Paterno became the winningest NCAA D1 coach up until his firing. The bulk of the movie takes place in the final days of Paterno’s tenure as head coach. To convey the complicated history of the Sandusky scandal, Paterno leans heavily into somewhat contrived conversations either between Paterno and his family or the reporter who initially broke the story (Sara Ganim) and her colleagues, as well as other members of the media. Flashbacks also play a role. Both these simplified conversations and flashbacks help fill in the blanks for viewers, but at times it feels a bit too forced.

Something I did like was that the film went to great length to laud the work of Sara Ganim (she advised on the film) and her colleagues for her work covering the story, as well as a considerable amount of courage put forth by Aaron Fisher, the first person to publicly accuse Sandusky. When we think of the scandal, we chiefly think about Sandusky and then Paterno, and if  you’re very familiar with it, the various names of Penn State leadership who miserably failed to take action. Ganim and Fisher are two names the majority of those familiar with the scandal would struggle to name when recalling the scandal and Paterno aims to right that wrong.

Paterno came off as accurate. Those handful of days were surreal, and while some of the firestorm may seem over the top to viewers, that’s how it went down. No dramatization is needed. The scandal erupted out of nowhere, rained fire on State College, and hasn’t been fully extinguished since. A mere few months later, Paterno was dead and there never was any sense of closure or clarity on Paterno’s legacy.

This film doesn’t help in that regard, and rightfully so. The Sandusky scandal was a failure of many institutions. Paterno was a part of that, and while it’s still hard to piece together how significant of a role he had in that failure, HBO put forth a honorable piece of work to try to present the complexities, conflicts, and oversights made to allow such evil to persist for so long. For some, that’s a good way to spend a Saturday night. For others, they may find themselves like my friend, who would rather spend the time on more cheerier content or activities. Those who tune in won’t be disappointed, but may find themselves with more questions than answers and unfortunately, I don’t think we’ll over really bring any ultimate closure and clarity to what transpired at Penn State. Perhaps that’s a good thing.