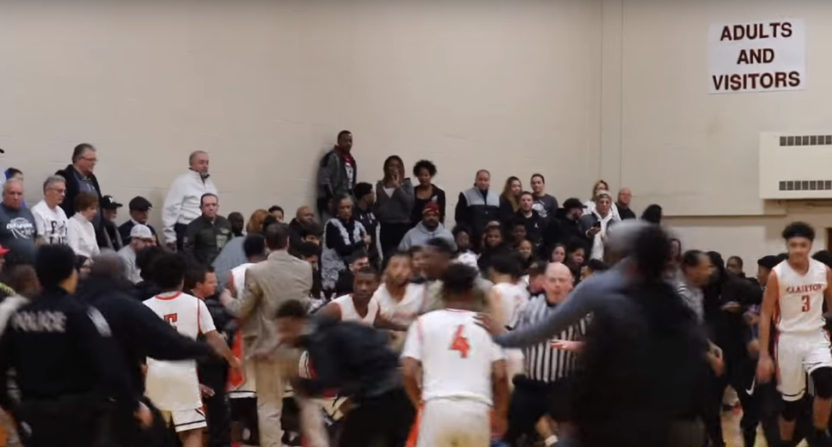 The game was called, the cops were called and more. Here’s another video of the incident:

There are likely to be some consequences for the schools involved, according to what Western Pennsylvania Interscholastic Athletic League executive director Tim O’Malley told Mike White of The Pittsburgh Post-Gazette:

“We’ve reached out to both schools and the officials for their response to what occurred,” said O’Malley. “Our board [of directors] is going to have sit and look at what we’re going to do. What occurred is totally unacceptable. It has no place in high school athletics.”

Oh, and one father, Eric Fusco, whose son Khori plays for Clairton, told White more about what happened:

“People were getting sucker-punched. I saw guys just getting picked off,” said Eric Fusco, who is also a former Clairton football assistant coach. “The game was chippy from the start, but I didn’t think this was going to happen. People have said they should ban both teams from the playoffs. I don’t think that’s going to solve anything. I think the fans are way more guilty than the players. You can’t hold players responsible for what fans do.”

That’s quite the brawl. Fortunately, it doesn’t sound like anyone was seriously hurt, but that’s still not something you want to see.