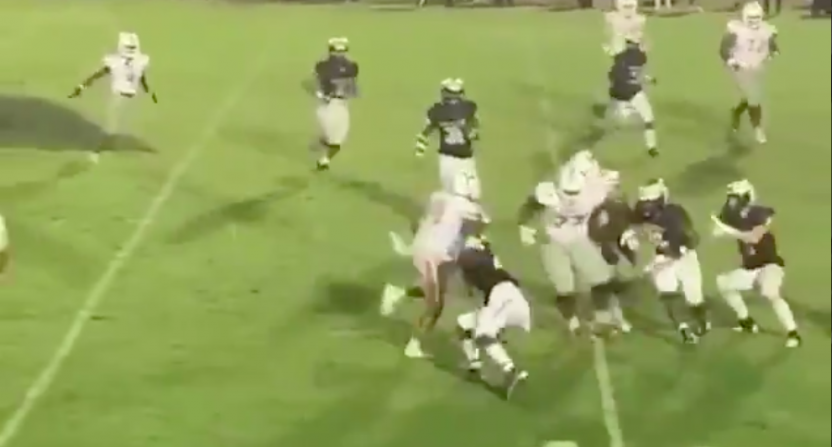 NCAA football might be back in full swing this weekend but the college guys have some serious catching up to do if they want to top the highlight created in the final minutes of Friday’s game between Hillcrest-Tuscaloosa and Wetumpka in Alabama.

Hillcrest-Tuscaloosa was trailing Wetumpka 30-28 with 2.9 seconds left on the clock and 59 yards to go to the endzone. It’s the kind of situation that calls for a hail mary trick play that probably isn’t going to work but you gotta try it anyway. And that’s exactly what they did, calling what they refer to as “Bronco,” in honor of the Boise State Broncos. The play, which basically amounts to “keep lateraling the ball back until someone somehow finds a gap,” just kept going as the team lateraled nine times before quarterback Ethan Crawford, the guy who had the ball at the beginning of the play, picked up a fumbled lateral and ran in into the endzone for a touchdown.

You’re not going to believe the end of the Hillcrest win over Wetumpka. pic.twitter.com/ulmOKUVcOt

AL.com’s Dennis Victory spoke with coach Sam Adams about the play, which he said they practice once a week and have attempted seven times before.

“We practice something that kind of looked like that every Thursday,” Adams said. “If it’s a fumble and the other team picks it up, we’re behind anyway so it doesn’t matter. Our guys did a good job of doing what they were coached to do and staying behind each other.”

“We never had it play out like that,” Adams said. “I don’t even know what to say. After it was all over with, there was pandemonium.”

There is a little bit of controversy around the initial lateral, which was really more of a “throw it up and see what happens” pass, which may or may not have gone forward, nullifying the play. There also seems to be a moment where an offensive player fumbles the ball and may have pushed it forward. Then again it also might have just been the camera angle, and either way, it’s going to go down as a game finish for the ages in Alabama high school lore.