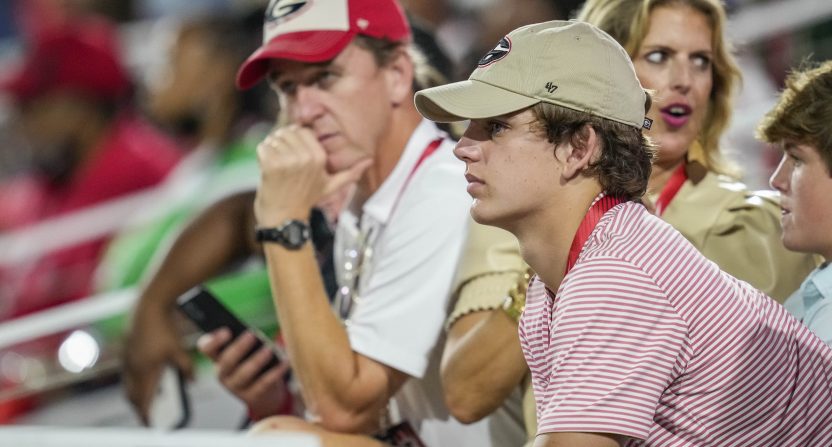 Peyton Manning and Eli Manning were known for many things as quarterbacks. Being able to run wild for touchdown scores was not one of those things.

Their nephew, Arch Manning, might be changing the narrative about the Manning quarterback style.

Arch, widely considered the No. 1 recruit in the 2023 class, was on ESPNU on Friday night when his Isidore Newman team squared off against undefeated Berkeley Prep out of Tampa. Berkeley went up 14-0 in the first quarter and Newman needed a spark to get back in the game. That’s when Manning faked a hand-off and then ran through a hole in the defense, trotting 68 yards to the endzone to put his team on the board.

ARCH MANNING TO THE HOUSE 💥 pic.twitter.com/Q6FAyThtRm

The 68-yard run was the longest of Manning’s career and showcased a whole different aspect of his game that is sure to excite colleges that would love to have him. Along with his running ability, the 6’4″, 215-pound quarterback came into the game having thrown for 1,186 yards and 17 touchdowns to just one interception. He now has over 5,000 passing yards and over 70 touchdowns in his three-year career with Newman.

Social media gets pretty excited about Manning and his potential, even if he’s not online to see it. Arch has uncharacteristically stayed off social media for the most part while playing under the spotlight that comes with his name and his pedigree.

“I check it for other stuff, but I’m not really on there much,” Arch said. “I don’t really feel like dealing with all of that.”

Given the craziness of the recruiting world on Twitter, that’s probably very smart, and extremely appealing to college coaches who want a guy like Manning focused on the field.

The high school junior isn’t expected to announce his college football decision until at least next spring, saying that he’s still “wide open” in his thinking. That said, he’s presumed to end up at an SEC school like his grandfather (Ole Miss), Uncle Peyton (Tennessee), or Uncle Eli (Ole Miss). He’s visited with Georgia and Alabama and will be at Ole Miss Saturday for the Rebels’ game against LSU. However, he’s also visited schools such as Clemson and Texas as well.