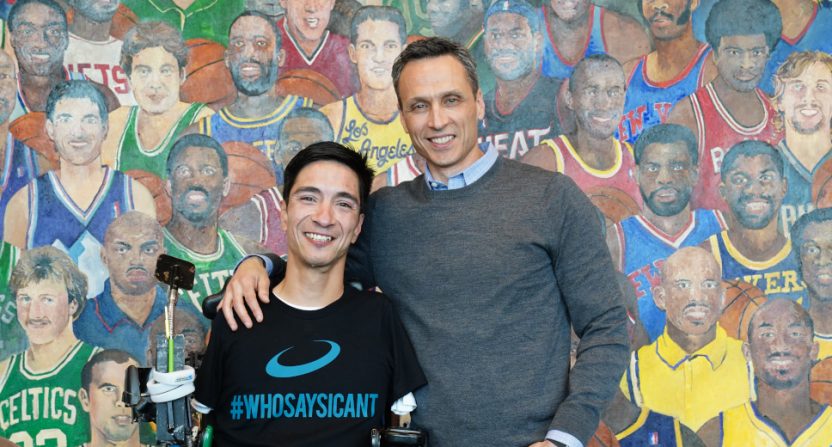 There are always some remarkable stories in sports, and Rob Mendez certainly qualifies there. Mendez was born without arms or legs thanks to tetra-amelia syndrome, a rare congenital disorder that prevents the formation of limbs during embryonic development. But he developed a love of football early, which he further grew by flipping and catching a squishy football with his neck, playing countless hours of the Madden franchise, and serving as a manager for his high school’s football team. He then went into announcing, and then coaching, spending 12 years as an assistant and then becoming head coach of the junior varsity team at Saratoga, CA’s Prospect High School this past year.

Mendez’s team went 8-2 and narrowly lost the championship game, but what was maybe more remarkable was how many people his story impacted. ESPN’s Wayne Drehs wrote a long feature on him in February, which was also accompanied by a video SC Featured piece. He toured ESPN’s Bristol, CT campus in May, leading to the above photo with ESPN president Jimmy Pitaro. And now, ESPN has announced that they’ll present Mendez with The 2019 ESPYS Jimmy V Award for Perseverance at the ESPYs broadcast on July 10, and ESPN The Magazine is featuring Mendez on their Heroes Issue, which hits newsstands this Friday.

The story on Mendez in there is a first-person letter he wrote to football, as told to Drehs; here are some highlights from that.

Last year, after I had spent 12 years as an assistant, someone finally trusted me with my own team: the junior varsity squad at Prospect High School in Saratoga, California. Our team went 8-2 and finished second in the conference. We lost the conference championship game in a 3-0 heartbreaker. But more important to me was what happened off the field and on the sidelines. Those kids gave me a purpose. A feeling that I not only belonged but that I was their leader. Most everywhere I go, people look down on me. They stare at me. They feel pity. On the football field, with my team by my side, they didn’t see me as a man in a wheelchair. They saw their football coach, a man who believed in them, who taught them about the importance of school, family and living your life the right way. And they all bought in.

There was something in the way they would look up to me, with this sort of magical look in their eye, waiting for me to say the right words to inspire them. No one had ever looked at me like that before. Rarely had anyone looked to me to be the one to help them.

ESPN followed our season and told my story. When the project began, I hated the attention. I had less than zero interest in being some sort of inspiration or poster boy for overcoming adversity. I just wanted to be a football coach. Coach Mendez. Plain and simple.

But after the story ran, the response forever changed the way I look at my life. That’s when I realized the power of our relationship, football. You and me.

…Now I have the same agent as retired NFL receiver Donald Driver. People ask me to come speak at their college or work meeting. I’m on the red carpet at the Tribeca Film Festival. At parties with Gavin DeGraw and Tristan Thompson. In July, I will receive the Jimmy V Award for Perseverance at the ESPYS. Are you kidding me? Jimmy V was an inspiration to me. I know every word of his ESPYS speech. And now I’m going to receive this award in his honor. I can’t even put into words how that warms my heart. I can only say thank you, football.

And here’s a key part of Drehs’ February feature on him:

Mendez says it started with the Madden video game. His older sister, Jackie, pushed her brother to try new things and one day tucked a PlayStation controller under his chin. He learned to press the buttons with his chin and collarbone. Unlike fighting or fantasy games where he constantly had to engage, football gave him breaks. Pick a play, execute for a few seconds, take a break, pick another play and repeat. He couldn’t get enough. In high school, his friends organized a 32-team Madden tournament. He finished second.

“It sounds so ridiculous, but it’s true,” he says. “That’s how humans are — they adapt. I couldn’t tell you what it felt like to catch a ball in the flat, but I knew what it was and why it worked.”

When his friends went out for football his freshman year of high school, Rob became the team manager. He absorbed everything he could. He drew up game plans on Madden and took them to practice. By his senior year, he worked his way up to quarterbacks coach. And he knew what he wanted to do for the rest of his life.

That’s a great story, and it and Mendez’s own letter to football are well worth a read in their entirety. And Mendez seems like an excellent pick for this year’s Jimmy V Award.