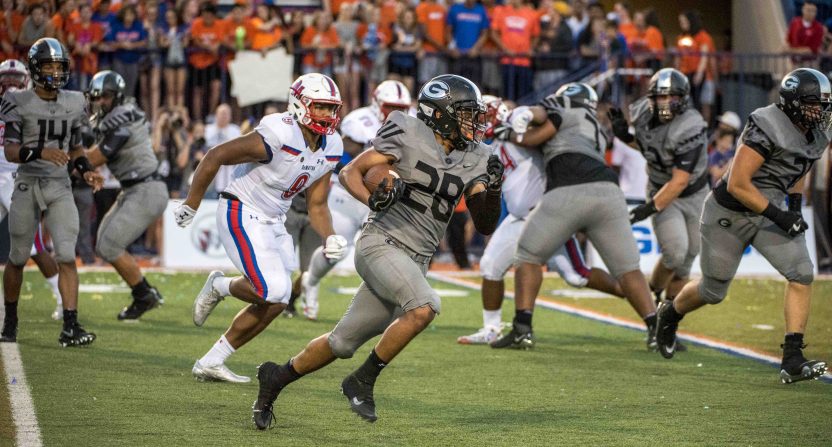 High school football teams are struggling. It’s a relative struggle, of course; traditional 11v11 football remains the number one sport in terms of participation nationally, according to a survey released today by the National Federation of State High School Associations.

But that’s a bit misleading; football, after all, traditionally has the biggest rosters (aside from maybe track and field), and while it dwarfs second-place track and field in terms of total participants, it’s actually only fifth in terms of schools offering the sport, trailing basketball, track, baseball, and cross country. Here, too, there’s a reasonable point: football, with its piles of specialized equipment and need for a large roster, is an expensive sport to offer, especially at a smaller school.

The decline is still striking, though, as overall participation has fallen from 1,112, 251 in 2015 to 1,086, 748 in 2016 and then again to 1,035,942 this past year. That’s a drop of 50,000 kids in a year, and those numbers tend to be felt. This time of year, small town papers tend to run area high school sports previews, and when my former high school’s dropped, I was shocked by the picture; the team filled a noticeably smaller portion of the bleachers than it did 15 years ago, despite school enrollment figures holding fairly steady.

Two Indiana high schools have dropped football this summer due to low turnout, one in the wake of a hazing scandal, the other a school that won a state championship in football less than thirty years ago. And at Yahoo, Jeff Eisenberg profiled a school in North Carolina that, like the latter of those Indiana schools, was forced to drop varsity football and focus on JV in an effort to rebuild the program:

Cedar Ridge High School coach Scott Loosemore began his all-important search for new players last spring by organizing a college-style visit day for the area’s most promising eighth graders and their parents. Members of the Cedar Ridge football team led a campus tour, a highlight video played and then Loosemore took the stage to tout the merits of his program.

When Loosemore wasn’t scouring neighboring middle schools for talent, he would seek out players on his own campus. He attended Cedar Ridge baseball, lacrosse and basketball games to pitch those athletes on going out for football. He did the same with any big, athletic boys he spotted in the hallways, the weight room or while scouting PE classes.

“To be honest, I even asked kids who didn’t look that strong or athletic,” Loosemore admitted. “We recruited on campus nonstop, but it was really difficult. Most kids did not want to play no matter how much we asked them.”

Eisenberg gives a variety of reasons why Cedar Ridge was struggling for kids, including a severe brain injury suffered by a player at a neighboring high school. But it’s more than that, of course, and a combination of factors, none of which look likely to be reversed; the sport has shrunk by about 7% over a three-year reporting run, nation-wide. That’s not sustainable, because while football has an advantage in terms of coming in first for overall participation, that roster size is also a hindrance when it comes to long-term viability in the face of declining turnout.

Most schools can find a dozen kids for a basketball team. It’s much harder when you have to find 40 or 50 for a football roster. From that earlier Indianapolis Star piece, Park Tudor, an Indianapolis private school known more for basketball players like Sacramento Kings guard Yogi Ferrell and New Orleans Pelicans rookie Trevon Blueitt, will be fielding a team despite having just eighteen players:

“Unfortunately, we had three kids move out of state and a couple more transfer or we would be right about our average, which has been about 20 to 25 kids the last seven years,” said Lowry, who is going into his seventh season. “The numbers are low, but I like the quality of the players we have and believe the future is bright.”

Lowry said the middle school numbers were up over the summer during conditioning. Park Tudor has seven seniors and three juniors, Lowry said.

“The numbers are always tight,” he said. “But this summer we had between 11 and 15 eighth-graders at middle school conditioning, were normally it is between five and eight. What happened last year (the cancelled game against Speedway) was so sudden the way the positions came out. We would have had to play a quarterback and running back who had never played those positions. It would have been dangerous. But I don’t think we’re in that situation this year.”

That means there are kids who will play literally every snap of the game, which seems much more dangerous, and highlights one of the reasons we could see more and more schools stop offering the sport; there’s an event horizon for the roster, where if kids don’t want to play or parents don’t want them to play, the roster gets small enough where it’s tough for even the most ardent football supporter to deny injury risks for kids.

Park Tudor is fielding a team, and their first game was last Friday.