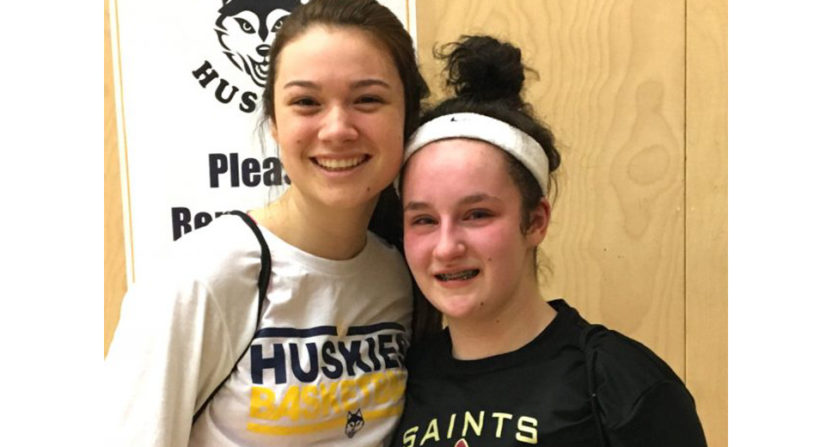 Sometimes, even a blowout win can have a whole lot of meaning. That’s the case for a game between two British Columbia high schools this last weekend, the Kelowna-based Okanagan Mission Huskies (ranked fourth provincially in their division) and the Kamloops-based NorKam Saints. The Huskies hosted the Saints and other teams in their New Year’s Classic, and that led to an awfully special moment for Okanagan Mission senior Emma Parmar (seen at left above).

Back on Nov. 29, Parmar tore her ACL in the Huskies’ last practice before their first game this year, which was particularly unfortunate considering that she sprained her ACL as a freshman, missed most of the next two seasons, and worked hard this past summer in rehab to get back to basketball. It looked like her dream of playing this year wasn’t going to happen.

But Parmar has continued as a registered member of the team, cheering them on from the sidelines, and with the Huskies up big against the Saints, Okanagan Mission coach Megan Faust gave her the chance to play. Parmar checked in with 1:58 left in the game, and although she couldn’t run or jump, she stood in the offensive zone and her teammates found her with passes. But she missed three shots, and time looked set to run out on her chance.

As Marty Hastings of Kamloops This Week writes, though, that led to a particularly special moment thanks to Saints’ junior point guard Cassie Ferguson (seen at right above):

Ferguson’s elder sister, Emily, played with Parmar on a select club team two years ago. The Saints’ point guard knew enough about Parmar’s situation to do something about it.

“Her shots just weren’t dropping,” Ferguson said. “My teammate inbounded it to me. There were five seconds left. I just passed Emma the ball and told her to shoot.”

Once again, Parmar was unable to drain the basket. Ferguson snared the rebound and gave her opponent one last shot.

“At that point, there was only one second left on the clock,” Ferguson recalled.

The Huskies held their breath.

“The shot went in, the buzzer went and everyone started crying,” Faust said.

“There was not a single person in the gym who had a dry eye,” Parmar said.

“I’ll never forget that moment and that feeling. I’m so thankful and grateful to her [Cassie]. I was in shock. We’re not little anymore. It’s very competitive. For her to make it about more than the game and recognize that, for me, it was greater than that . . . it was just incredible.”

That’s an awesome story, and a great act of sportsmanship by Ferguson. It’s terrific that Faust found a chance to let Parmar play, something Parmar said meant a ton to her.

But Ferguson’s actions particularly stand out; we often see players go the extra mile for their teammate, but doing so for an opponent in the middle of a game is a little more unusual. This one was well in hand, though (it finished 75-31 for Okanagan Mission), and Ferguson’s move to pass the ball to Parmar was much more notable than the game’s result.

She told Hastings afterwards she didn’t think her decision was all that special, though.

“Nobody should have to sit out their senior year,” Ferguson said. “Anybody on my team would have done it because she deserves it.”

[Kamloops This Week, via Gary Ahuja]