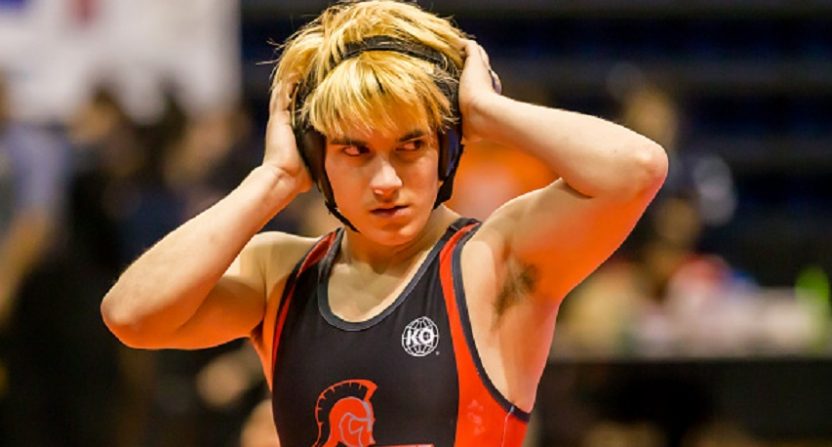 Mack Beggs won the Texas Class 6A 110-pound girls state championship on Saturday. While that would normally be the headline itself, this particular story carries some controversy.

Beggs, a 17-year-old junior competing for Euless Trinity in the Dallas-Fort Worth area, is a transgender wrestler transitioning from female to male and wanted to compete in the boys division. But the governing body of Texas public school athletics, the University Interscholastic League (UIL), would not allow him to wrestle boys. According to UIL rules, which were decided in a vote one year ago among school superintendents and athletic directors, athletes must compete under the gender on their birth certificates.

As Beggs has undergone testosterone therapy while transitioning from girl to boy, he compiled a 56-0 record this season. He won a regional championship after two opposing wrestlers forfeited, apparently due to concerns that Beggs had an unfair advantage because of those testosterone treatments. However, Beggs’ school district shared his medical records with the UIL, showing that the testosterone was “well below the allowed level,” according to CBS DFW.

While competing in four matches during the state championships, crowds were divided over Beggs’ participation. Parents and coaches of opposing wrestlers neglected to speak to reporters and retreated to restricted areas after their matches. But Associated Press reporter Kristie Rieken spoke to a parent who yelled several times that Beggs was a cheater.

“Look at how beefed up she is,” Overstreet said to the AP. “It’s because she’s taking an enhancement. Whether she’s a boy, girl, wants to be purple or blue it doesn’t matter. When you’re using a drug and you’re 10 times stronger than the person you’re wrestling because of that drug that (shouldn’t be) allowed.”

Prior to the championship final, the event’s PA announcer told the audience not to do or say anything that would cause a competitor to “doubt their accomplishments this weekend,” according to the Dallas Morning News. Before and after the match, Beggs received loud cheers from the crowd, followed by some boos.

Beggs’ progression toward a state wrestling title certainly comes at an intriguing time, following a week when the Trump administration announced the end of federal protections that allowed transgender students to use bathrooms based on their gender identity.

Additionally, Texas legislators are considering a bill similar to North Carolina’s HB2, which requires transgender people to use the bathroom of their “biological sex.” That law compelled the NBA to move this season’s All-Star Game from Charlotte to New Orleans, while also prompting several businesses and entertainers to avoid North Carolina in protest.