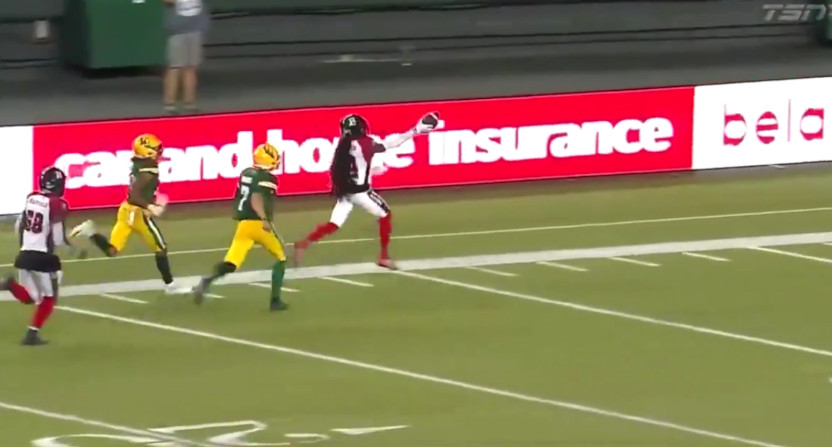 Regular-season CFL football is back this year, for the first time since 2019, and the league’s opening weekend saw one particularly remarkable highlight Saturday night. The Ottawa Redblacks and (newly renamed) Edmonton Elks had a back-and-forth defensive battle for much of their game, with Edmonton leading 12-9 with just over 10 minutes left in the fourth quarter. Then, this pass from the Elks’ Trevor Harris for wide receiver Shai Ross bounced off Ross’ hands and was grabbed by Redblacks’ defensive back Abdul Kanneh, who took it back 102 yards for the game’s first touchdown:

KANNEH WITH THE PICK 6

That’s an amazing highlight. And while that one came with some luck thanks to the bobble by Ross, Kanneh did very well to grab it mid-air and then take it more than 100 yards for the score. This was also his second interception of the evening; here’s his first one, which saw an even more impressive catch.

Kanneh caught that like a receiver, what a play pic.twitter.com/GkbTarfYSK

The Redblacks would go on to win this game 16-12 after the Elks came up a yard short on their final drive:

The Elks were 1 yard away from completing the comeback pic.twitter.com/zUP9TfjZwB

And that was just part of this weekend’s CFL highlights. Earlier Saturday, at the start of the second half of their home game against the Toronto Argonauts, Calgary Stampeders’ DB DaShaun Amos made a remarkable play, punching the ball loose from Toronto’s Ricky Collins and turning a touchdown into a touchback:

In the end, though, Toronto would win that game 23-20. Another weekend highlight came from the Saskatchewan Roughriders’ 33-29 home win over the B.C. Lions Friday. Saskatchewan led 31-0 in the second quarter and 32-9 at the half, but B.C. fought back and made it close. Nathan Rourke found Bryan Burnham with this great throw to get within four in the final minutes:

Was that throw 10 cents? Because it was an absolute DIME pic.twitter.com/r0X6w9ddB7

And the first game of the weekend, and of the season, saw the defending Grey Cup champion Winnipeg Blue Bombers beat the Hamilton Tiger-Cats 19-6 at home, with an incredible rushing performance from Canadian RB Brady Oliveira key there:

On his CFL debut, Brady Oliveira now has over 100 yards rushing tonight

Legend in the making 💪 pic.twitter.com/k4CHzNcQ05

There’s lots still ahead for the CFL in this shortened 14-game season, but the opening weekend certainly provided quite a number of highlights.