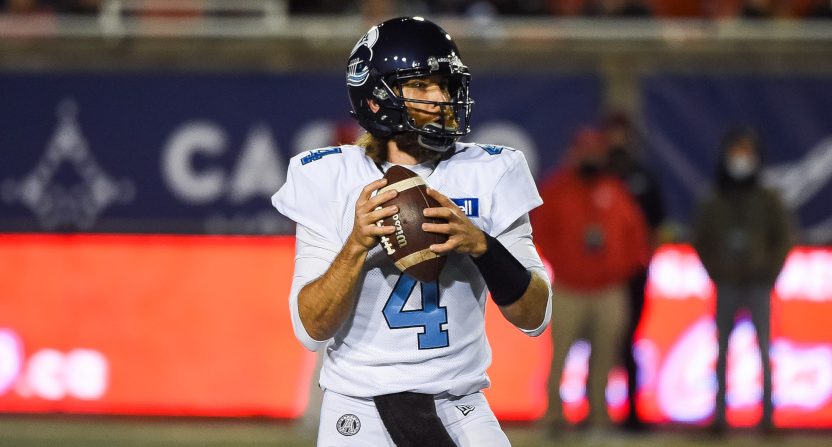 Sunday’s Canadian Football League Eastern Final could be heavily impacted by five Toronto Argonauts players attending a Toronto Raptors’ NBA game Thursday. Five players appeared at that game: starting quarterback McLeod Bethel-Thompson (seen above during an Oct. 22 game against the Montreal Alouettes), starting defensive halfback Jeff Richards, LB Dexter McCoil, DE Charleston Hughes, and WR Llevi Noel. Under the CFL protocols announced at the start of this year, those players would have missed Sunday’s playoff game against the Hamilton Tiger-Cats. But the CFL announced Friday that while this is a significant violation, they’ll require the players to undergo intensive quarantining and testing, but will not ban them from playing if they continuously test negative:

Following Toronto Argonauts quarterback McLeod Bethel-Thompson’s presence at last night’s Toronto Raptors game, the CFL consulted its Medical Committee, which has advised the league throughout the season on its COVID-19 protocols, and its responses to violations of them.

The league has now decided upon the following regarding Bethel-Thompson.

They are now subject to the same quarantine and testing requirements as Bethel-Thompson.

The primary impact here is around Thompson and Richards,  as Noel and McCoil are on the six-game injured list and Hughes is on the one-game injured list. But those are two big pieces, and the availability of Thompson in particular is a big deal. At the very best, the Argos will now be starting him without him receiving the benefit of the last two days of walkthroughs. And if he comes up with a positive test, that means that their starter is now Antonio Pipkin.

Still, that decision is much lighter than the punishment would have been under an unmodified version of the CFL’s COVID protocols, and that’s creating some controversy in its own right. And there’s some logic to that. It’s somewhat unfair to the players who have been following the rules all season and the players who did wind up ruled out under COVID protocols that these five players are getting away with a less severe penalty than what was previously announced. And with this particular decision favoring the Argos, the “the league office is trying to help the Argos!” dialogue is already back in force.

However, this does seem like the best possible decision the CFL could have come up with in an exceptionally trying situation. One of the challenges with the COVID-19 pandemic is that the situation has repeatedly changed drastically over the past two years, and that different jurisdictions have come up with incredibly different rules (and also frequently changed their own rules). That’s led to issues in the U.S. as well, where the vaccination status of players like Kyrie Irving and Andrew Wiggins has become a big deal specifically because they play in areas requiring vaccinations for many indoor events, whereas they could play for other teams without problems (at home, at least).

But the differing rules are certainly notable in Canada as well. And they led to this CFL season starting two months later than normal and starting with only games in the West for the first two weeks thanks to easier regulations there allowing fans. And the particular protocols here were developed around the Delta variant crisis this summer; while there may well be another crisis coming with the Omicron variant, the COVID-19 situation in Canada (as in the U.S.) has generally improved since the summer, with more uptake of vaccines and less new daily cases. That’s part of how there was an indoor Raptors’ game Thursday in the first place, as that wouldn’t have been allowed under Ontario rules this August. And it’s notable that while the league statement here is right to cite CFL protocols “much stricter than those facing the general public,” there are questions about if those protocols are still the best and most effective approach at this point.

So there’s definitely an argument for the CFL medical committee amending rules to reflect the current situation, rather than what was decided ahead of the year. And it would have been an awful look for the CFL to have one of its most important games of the year impacted by a starting quarterback benched not thanks to getting COVID, but rather benched thanks to an inflexible protocol that was established during a very different era of this pandemic. Making changes when new information becomes available should not always be seen as a sign of weakness. And, on the competitive side, it should be noted that this is not a punishment for the Tiger-Cats (who kept to the protocols); rather, it’s a lack of a punishment (or at least, a lack of the most severe punishment possible; there’s still punishment in the missed practices and walkthroughs) for the Argos. The Tiger-Cats will still be playing the team they expected to play; they’re just not getting the full boost they might have got from this Argos’ COVID protocol violation.

In any case, it’s clear that this was a major mistake from these Argos’ players given the league’s COVID protocols, and one that should not have happened. And the blame there should not all be on them; there were several reports that Bethel-Thompson at least (and probably these other players too) was at the Raptors’ game at the request of Argos’ owner Maple Leaf Sports and Entertainment (which also owns the Raptors). And that organization should have known much better than to tempt the CFL protocols this way.

And really, if those reports that MLSE sent Bethel-Thompson there are accurate, they’re far more to blame for this mess than the league office. They put the league office in an awful and avoidable mess, and for next to nothing. And they’ve certainly brought down some impacts on themselves and their players in the process. At the very least, their starting QB (and a starting HB) will miss two important practices and walkthroughs, and the league release mentions “The CFL does not disclose supplemental discipline tied to its COVID-19 protocols,” so there may be some further fines for these players and the team. And at the worst, if Bethel-Thompson tests positive, this move may lead to the Argos having to start their backup in a crucial playoff game, with a trip to the Grey Cup on the line. That is a considerable ways from ideal.