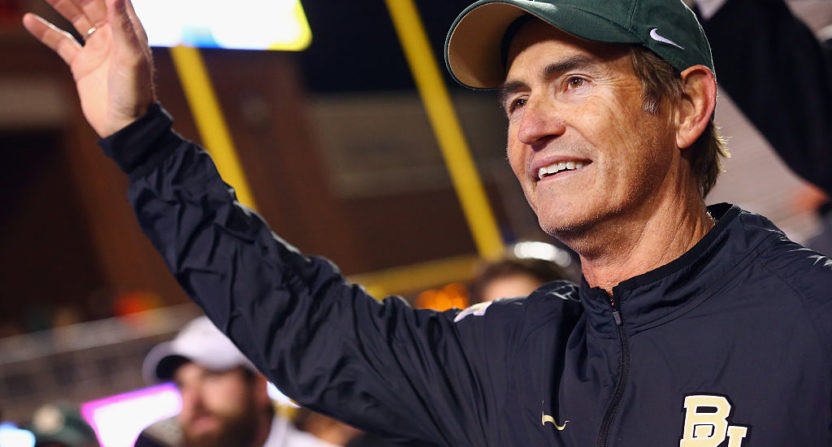 The Hamilton Tiger-Cats’ move Monday to add disgraced former Baylor coach Art Briles as an offensive assistant and then have their CEO defend the hire by saying Briles was “a good man that was caught in a very bad situation” was one of the dumbest decisions in the history of the CFL, and one that was eventually recanted after a day of incredible backlash. The Ticats’ CEO, Scott Mitchell, told Drew Edwards of 3 Down Nation “I spoke to the league about it as a potential concept and had a good discussion about it, a good deliberation about it,” but the CFL issued a statement Monday afternoon about commissioner Randy Ambrosie being in “continuing discussions” with the team about the hire, and then issued a joint statement with the Tiger-Cats Monday night that Briles would no longer be joining the team:

The #CFL and the #Ticats just announced Art Briles is no longer joining the team. pic.twitter.com/rnAw5GEH01

Why the sudden reversal? Well, the league and the team had been roasted on all sides for this. One particularly strong criticism came from Ticats’ sponsor Barry’s Jewellers (also the sponsor of the team’s annual women’s football clinic Monday night; talk about bad timing), which denounced the hire and said they’d donate a portion of their sales over the next months to the Sexual Assault Center of Hamilton:

“We strongly condemn and urge the team’s management and ownership to immediately sever any ties they may have,” the sponsor said in a statement. “Mr. Briles may or may not have a valid coaching track record, but to choose the chance of winning football over the importance of values goes beyond our core values and is absolutely not acceptable.”

There was also international media condemnation, such as this USA Today piece from Nancy Armour titled “Clueless CFL team gives former Baylor coach Art Briles chance he doesn’t deserve,” which had quite the opening:

Congratulations, Hamilton Tiger-Cats. Your 0-8 record, which includes a 60-1 loss, is no longer the worst thing you’ve done this season.

The Canadian Football League team announced Monday that it has hired Art Briles, who’s largely been a pariah in the coaching community since he was fired by Baylor in May 2016. There’s something about callous indifference to sexual assaults that tends to turn prospective employers off.

And plenty of current and former CFL players blasted this, including former players Jason Vega and Ken Evraire:

I can totally see how the #CFL and the #Ticats think #ArtBriles just has a bad rep and deserves a chance. I mean, this must be #fakenews. ?? pic.twitter.com/2XQedNv2Ct

Evraire was far from the only one calling for a boycott. Plenty of Ticats’ fans said they wouldn’t be attending games if the team hired Briles, and others put social media pressure on league sponsors. And it’s notable that advocates for sexual assault victims (and past victims themselves) like Theo Fleury and Brenda Tracy also condemned this:

If you knew and didn't say anything then you are just as much part of rape as the people who committed rape. Shame on #CFL

Art Briles at the CFL: Why He Should Never Coach Again https://t.co/RsL2UAXA6W via @HuffPostBlog

That piece from Tracy makes a lot of valuable points:

Art Briles was hired by the Hamilton Tiger-Cats of the Canadian Football League today. I have been preparing for this day to come. Knowing the “football machine,” I didn’t think he would be blackballed in the same way that Kaepernick has been by the NFL ― and yes, that’s an intentional jab. I expected someone to hire Briles and I expected to be outraged along with most of the nation. What I didn’t expect is the shift in conversation around college coaching vs. professional coaching and America vs. Canada. Suddenly, I’m reading comments like “I have zero issue if a professional team wants to hire Art Briles”; “He just doesn’t belong on a college campus”; and “The Canadian league ― at least he’s not in the U.S. anymore.”

Here’s why this discussion is so upsetting to me. Yes, Art Briles is not in charge of impressionable young college men. He’s now in charge of adult men with jobs in the CFL. So, the threat of him influencing their minds in a negative way may be less, but it’s still there. There has been nothing to prove to me that Briles has changed his personal beliefs or attitudes that contributed to the mess at Baylor and he is still in a position of power and influence over these new players. Not to mention, and I think we can all agree, violence doesn’t just automatically become a non-issue in professional sports. How many stories about violence in the NFL riddle our social media timelines every day?

That’s particularly important considering what the CFL has done to develop a domestic violence policy, and how they’ve banned some players with past domestic violence cases. Allowing a coach like Briles in certainly would have hurt the league’s image on that front. And one anonymous current CFL player wrote for 3 Down Nation that it also made players feel hypocritical about supporting the league’s recent “Diversity Is Strength” campaign:

As a CFL player, we recognize that along with playing football part of the job sees us serve as active ambassadors for the league. So, when a couple of weeks ago the diversity T-shirts were placed in our lockers it was our responsibility to wear them, and in turn, show the world the CFL’s ‘alleged’ stand on mutual respect and other core values which were implied under the “Diversity is Strength” campaign. A tremendous message in light of recent events (Charlottesville, VA), however, I was leery of how quickly something would happen that would expose the superficial nature with this campaign.

For those of you unfamiliar with the Art Briles case I can bring you up to speed quickly: investigations showed he failed to report several cases of rape, including gang rape, and sexual assault to the authorities, in turn, covering up for his players at Baylor University. Sickening. Think Penn State, but substitute children campers with female students. Disgusting. Wrong. Sad.

Clearly, this is someone any organization needs to avoid. Oh, and did I mention he has no CFL experience? No, seriously. None. This move makes as much sense from a football perspective as it does from a public image one.

…The league has turned away the likes of Greg Hardy and Justin Cox recently for domestic abuse charges and allegations, yet they’ll do nothing and allow the hiring of a coach with this on record. Quite the dichotomy.

I was fearful that my wearing of the diversity T-shirt made me a cog in a superficial, empty campaign. Turns out it took only two weeks for this prop to have that fear validated.

The decision to eventually backtrack on the Briles hiring was pretty necessary given the massive amounts of fire the CFL and the Ticats were taking on all sides, and it feels like the right decision. But it doesn’t atone for this hire in the first place, or for the team and the league having weeks of conversations about this, knowing full well what the backlash would be, and still deciding to go ahead with it. The CFL and the Ticats weakened many of their fans’ trust Monday, and although they eventually made the right call with their feet pressed to the fire, it should never have gotten to that point. There were countless coaches with more CFL experience who would have been even a better on-field fit than Briles, to say nothing of the off-field concerns. Instead, the Ticats hired Briles anyway, and only recanted under extreme pressure. That’s not going to instantly fix how this decision hurt many fans and players.