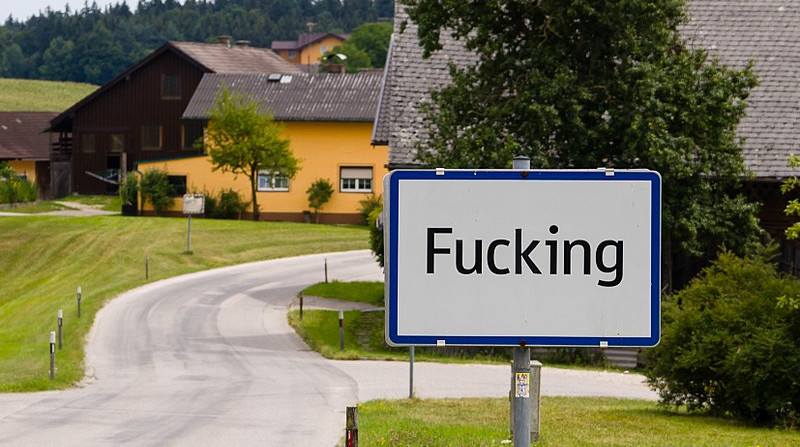 Austria now comes with less Fucking. The village of Fucking, a 100-person town with a name that perhaps dates back as far as the 11th century AD, is changing its name to “Fugging” as of January 1. And they’re citing the influx of English-speaking tourists (and the ridicule those tourists have brought, and the road signs they’ve stolen, which have led to the village even using theft-resistant concrete) as a reason why, as per an Agence France-Press piece picked up by The Guardian:

“I can confirm that the village is being renamed,” said Andrea Holzner, the mayor of Tarsdorf, the municipality to which the village belongs.

“I really don’t want to say anything more – we’ve had enough media frenzy about this in the past,” she told the regional daily Oberösterreichische Nachrichten (OOeN).

According to the Austrian daily Die Presse, the villagers, known as Fuckingers, “have had enough of visitors and their bad jokes”.

But not everybody seems happy about the impending change.

“Don’t people have any sense of humour these days?” asked one OOeN reader.

The Wikipedia entry for this town is particularly amazing. Some highlights:

The village is especially popular with British tourists; as a local tour guide explained: “The Germans all want to see Mozart’s house in Salzburg; the Americans want to see where The Sound of Music was filmed; the Japanese want Hitler’s birthplace in Braunau; but for the British, it’s all about Fucking.” Augustina Lindlbauer, the manager of an area guesthouse, noted that the area had lakes, forests, and vistas worth visiting, but there was an “obsession with Fucking”. Lindlbauer recalled how she had to explain to a British female tourist “that there were no Fucking postcards.”[11]

The road signs were commonly stolen as souvenirs[9]—the only crime which has been reported in the village.[6] It cost some 300 euros to replace each stolen sign, and the costs were reflected in the taxes that local residents pay.[5] In 2004, owing mainly to the stolen signs, a vote was held on changing the village’s name, but the residents voted against doing so.[7] Tarsdorf municipality’s mayor Siegfried Höppl stated that it was decided to keep the name as it had existed for 800 years,[7] and further stated that “[e]veryone here knows what it means in English, but for us Fucking is Fucking—and it’s going to stay Fucking.”[12]

Well, it didn’t stay Fucking in the end. So perhaps they were fucking around and found out. We’ll see how the shift to Fugging works out for them. And hey, if people are looking for humorous names in the area, the village of Petting isn’t far away in Germany…

[The Guardian/AFP/photo from Tobias Maier on Wikipedia]