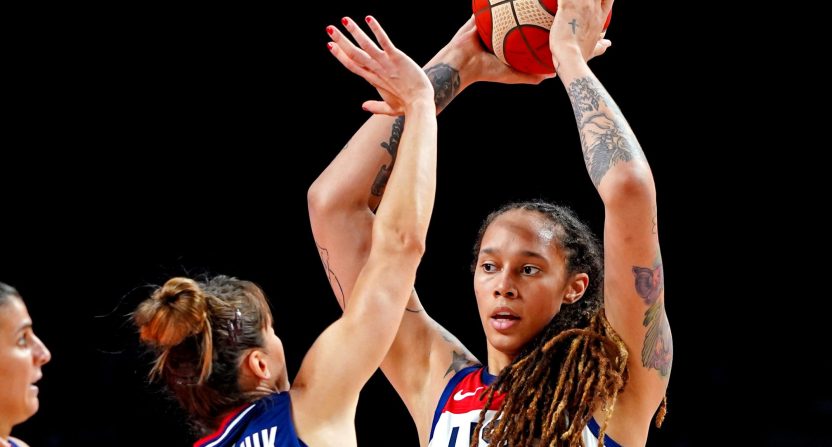 The saga of American WNBA star Brittney Griner‘s imprisonment in Russia took another twist Thursday. There, Phoenix Mercury center Griner (seen at right above playing for the U.S. national women’s basketball team in an Aug. 6, 2021 Olympic game against Serbia) pled guilty to drugs charges, but said that came from accidentally packing vape cartridges containing hashish oil (illegal in Russia) in her luggage rather than intentionally breaking the law. Here’s more on that from Reuters:

KHIMKI, Russia, July 7 (Reuters) – U.S. basketball player Brittney Griner pleaded guilty in a Russian court on Thursday to drugs charges that could see her face 10 years in prison, a Reuters journalist reported from the courtroom, but said she had not deliberately broken the law.

…”I’d like to plead guilty, your honour. But there was no intent. I didn’t want to break the law,” Griner said, speaking English which was then translated into Russian for the court.

…”I’d like to give my testimony later. I need time to prepare,” she added.

The next court hearing was scheduled for July 14.

BREAKING: A source says Griner told the court she accidentally packed the cartridges and did not intend to break Russian law. https://t.co/GrmYYXXf42

As Quinn also noted, a guilty plea here is potentially a recognition that Griner was going to be found guilty regardless,  and it does also perhaps pave the way for Griner to be sent back home to the U.S. in a prisoner swap:

to bring her home in a prisoner swap. There was a recognition that she will have to admit guilt before Russia agrees to a deal to send her home. Pleading now, it was thought, would get that out of the way and possibly help move negotiations forward. /3

Whether that will happen remains to be seen. Griner’s supporters in the U.S. have put lots of pressure on the government to seek her release, and the U.S. did classify her as illegally detained back in May. U.S. president Joe Biden and vice president Kamala Harris also spoke to Griner’s wife Cherelle Wednesday, shared a draft of a letter Biden plans to send Griner, and said Biden “is working to secure Brittney’s release as soon as possible, as well as the release of Paul Whelan and other U.S. nationals who are wrongfully detained or held hostage in Russia and around the world.” But the Russian government has repeatedly denied that the charges against Griner are political, and they’ve shown little willingness to discuss her release and have criticized the U.S. media attention on it. Here’s more on what happened there Wednesday, from Reuters:

Referring to a letter that U.S. President Joe Biden intends to send to Griner according to NBC news, Deputy Foreign Minister Sergei Ryabkov said that “hype” around the case does not help, and that “this kind of correspondence does not help”.

We’ll see what comes next in the Griner situation.