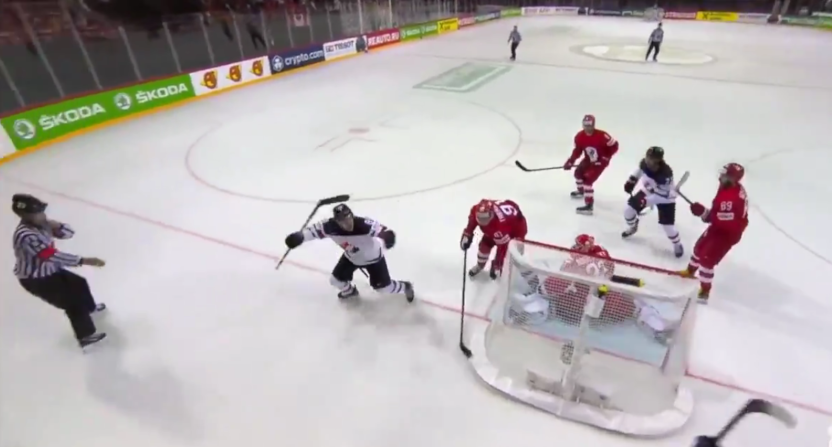 The IIHF men’s world hockey championships are currently underway in Riga, Latvia (unlike the women’s event, which was postponed indefinitely in April just days before teams arrived in Canada for that), and they produced a significant upset Thursday. The Russian team (competing as “ROC” thanks to ongoing IOC doping sanctions prohibiting the usage of the Russian flag or anthem) posted five regulation wins, one overtime win and one regulation loss in seven preliminary round games, putting them on top of Group A and giving them a quarterfinal matchup with Canada (three wins, three losses, one overtime loss, fourth in Group B). But there, it was the Canadians who came out on top with a 2-1 overtime win, and they did so on a goal by Calgary Flames’ winger Andrew Mangiapane, which came from a great combination rush with Detroit Red Wings’ defenseman Troy Stetcher:

Here’s another angle, which illustrates the tremendous speed Mangiapane showed on a full-ice rush here, taking the puck in deep around a defenseman. He then dropped it to an open Stetcher and went to the net. Stetcher then pulled off two great dekes of sprawling defenders and found an open Mangiapane with a cross-ice pass, and Mangiapane buried it.

Canada, who barely squeaked into the playoffs, has beaten Russia in overtime to advance to the semifinal.

Troy Stecher made a fantastic play to set up Andrew Mangiapane and that’s it.

Canada will play USA in the semifinal.

As Ellis notes there, this now means Canada will face the U.S. Saturday in the semifinals. That game will air at 7:15 a.m Eastern, on NHL Network in the U.S. and on TSN in Canada. The U.S. team finished first in Group B with six wins and one loss in the preliminary round, then dispatched Slovakia 6-1 in the quarterfinals Thursday. So they’re having a much better overall tournament than the Canadian team. But there’s always a good rivalry between those countries, and Canada certainly put on an impressive showing against the favored Russians Thursday to advance.  If they can keep that up Saturday, this might be quite the matchup indeed.