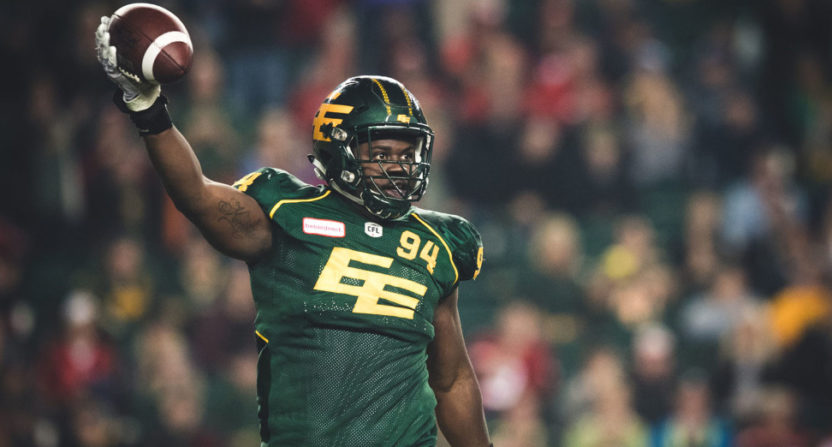 The Canadian Football League gives its commissioner the power to prevent teams from signing particular players or force them to release players who get in trouble, but that power is rarely used. Even in the cases of players like Yonus Davis and Adam Braidwood who have wound up in significant legal trouble, it’s usually been the teams releasing them (in Braidwood’s case, well after the initial incident), not the CFL office. However, it appears to have been the league office that was initially behind booting defensive tackle Euclid Cummings from the B.C. Lions this week, almost a full year after charges of sexual assault (against two different alleged victims), assault and uttering threats to cause death or bodily harm were laid against him. And that timeframe raises a lot of questions.

Cummings’ release came to light Wednesday when the CFL put out a statement, which read “Upon learning of the criminal charges facing Euclid Cummings, CFL Commissioner Randy Ambrosie has voided his contract with the BC Lions. As these charges are before the courts, the CFL will offer no further comment.” The Lions then stated their own support for the decision, with general manager Ed Hervey offering the following comment in the league’s statement:

“We support the Commissioner’s decision to void the contract of Euclid Cummings in light of criminal charges he is currently facing. We were given no indication by the player or his representation that these charges existed and I assure our fans, partners and supporters of the CFL across Canada, that we would not have offered him a contract had we known about this situation. Given that matter is before the criminal courts and under a publication ban, we will not be offering further comment.”

None of that indicated what the charges against Cummings actually were, though. But Wednesday night, J.J. Adams of Vancouver-based newspaper The Province reported that this is around four charges that were laid against Cummings last April, which revolved around an October 2016 incident:

Cummings is charged with sexual assault, assault and uttering threats to cause death or bodily harm to one person, and the sexual assault of another.

The 26-year-old played 16 games the following season with the Edmonton Eskimos — his eight sacks ranking third in the CFL, his three forced fumbles second-best in the league, along with 22 tackles — but news of the charges — filed on April 21, 2017 — only surfaced Wednesday.

However, as per a 3 Down Nation report from Drew Edwards, the Bombers were aware of the investigation into Cummings in November 2016 and passed that information on to the league. But the Eskimos say they didn’t know about it:

“In November of 2016, we were notified by the Vancouver Police about a matter involving one of our then-players. Though charges had not been laid, we immediately informed the CFL,” the [Bombers] said in a statement issued to 3DownNation. “As you know, this matter is now before the courts so we have nothing further to add except to say that this individual’s contract expired at the end of the 2016 season and was not renewed.”

…The Eskimos say they weren’t aware of the incident or the charges before he was signed or while he was a member of the team.

“We were unaware of the charges and will not comment further as the matter is before the courts,” the team said in a statement.

The league implemented a policy on violence against women in August 2015, which includes lines like “In cases where there are clear and documented cases of violence against women – determined by the police, the courts, or confirmed by the perpetrator – the CFL will impose sanctions” and “These sanctions will range from suspension for single or multiple games to a lifetime ban from the CFL, depending on the severity and number of incidences.” So it’s interesting that there wasn’t league action taken against Cummings (even in terms of a suspension rather than an outright ban) when the Eskimos signed him in the spring of 2017, or later that spring after the charges were officially laid against him.

It’s possible that some of this comes from a change in league leadership, as former CFL commissioner Jeffrey Orridge announced he was stepping down on April 12, 2017, shortly before the charges were laid against Cummings. Current commissioner Ambrosie wasn’t named to that job until July 2017, and it’s quite possible that this is in fact the first time he heard of the charges against Cummings. But that does raise questions for the CFL about their past handling of this situation, and about why there was no mention of anything around Cummings when he signed with Edmonton last spring or with B.C. earlier this spring.

The league’s decision to void Cummings’ contract is a bold step, as previous cases of a CFL-wide ban on a player appear to only involve Ray Rice, preemptively banned by former commissioner Mark Cohon (although there was never confirmation that Rice was actually trying to sign in the CFL, he was briefly placed on a negotiation list), and Johnny Manziel, who Ambrosie banned from signing last year before putting him through an evaluation process and clearing him to sign this year (although that may not happen). But it seems like a reasonable step considering the number and severity of charges here, and considering how the league in general and the Lions in particular have been emphasizing firm stances on ending violence against women.

The larger questions from this are about how information about accusations or charges against players is handled by teams and the league office, though. In this case, it appears that the message about Cummings got lost somewhere along the line. The CFL appears to have done the right thing now, but they’ll need to improve their policies to make sure that a similar situation doesn’t pop up again.