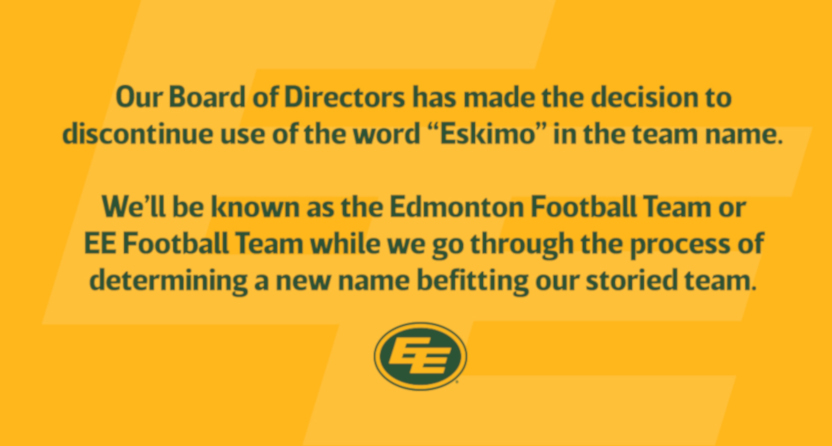 After years of discussion fueled recently by sponsorship pressure, a name change is ahead for Edmonton’s CFL team. The team had been known as the Eskimos since their official formation in 1910, and had been unofficially called that before that time, but there had been growing pressure on them to make a change in recent years, including from members of the Inuit.

This year, around the name change with Washington’s NFL team, sponsors added some pressure that led to a further review, and now has led to the name actually changing. TSN’s Ryan Rishaug reported last week that this was coming, and the team put out a statement confirming that Tuesday:

There had been controversy around the club’s name for some time, and a good deal of that is about the name itself. While “Eskimo” was once widely used (including by governments) for labeling northern aboriginal peoples, there have been complaints about that word for a long time. Some of those are on origin claims that tie it to the Cree word “askamiciw” referencing eating raw meat, and that’s a particular problem. There are other origin stories, including the word having to do with snowshoe usage, but the “askamiciw” part has taken particular criticism. Even if that wasn’t the origin of the word “Eskimo,” it’s long been associated with that. But that’s not all of the criticism; there are also issues with it being an inaccurate reflection of how those people refer to themselves.

The last few decades have seen Canada and Greenland largely change from using “Eskimo” to using “Inuit” to discuss the northern aboriginal peoples that live in those countries, a change favored by many of those people. In Alaska and Siberia, a range of terms including “Eskimo” are still used, but that usage is decreasing as well in favor of “Yupik,” a group distinct from the Inuit. So “Eskimo” had not been an accepted name in Canada for quite a while outside of the football team, and that’s part of what led to this change, but it’s also not simply about the term being outdated; many of the complaints here were about a CFL team using a group of indigenous people as a name in the first place, not just using a much-criticized name for them.

For example, Natan Obed, president of the Inuit Tapiriit Kanatami, wrote a Globe and Mail op-ed in 2015 around the Edmonton team’s appearance in that year’s Grey Cup declaring that “Inuit are not mascots.” That op-ed kicked off a new wave of discussions around the team’s name, which had been percolating for some time, and it led to the team conducting some consultations with Inuit groups. But the team repeatedly said those consultations were inconclusive, and they didn’t appear to do a whole ton on it (other than registering some trademarks and working on a long-term plan) until growing public and sponsor pressure this year.

Now they’re officially committed to a change, though, and that’s a significant step. Board chair Janet Agrios told Terry Jones of The Edmonton Sun last week that “We have gone through the exercise of looking at just the hard costs and it’s over a million dollars.” The team’s now committed to making that change, and while that may be a significant short-term cost, there’s a case that they’re off better doing it now rather than putting it off.

There’s no timeline yet for how long the team will take to “go through the process” of finding a new name. Plenty have already been suggested, from Edmonton Empire to Edmonton Elks and more, but more may emerge. In any case, whether the CFL will have a 2020 season or not at all remains rather up in the air at this point, there appears to be some time. We’ll see what’s ahead for this team, but we do now know that they’re changing their name.