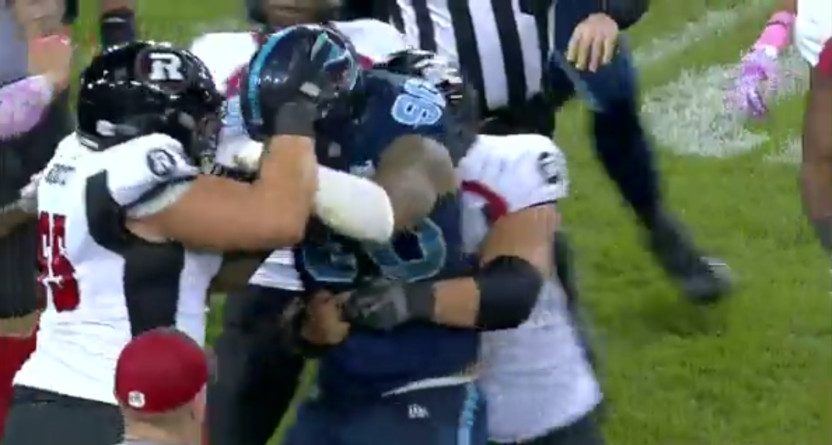 The Canadian Football League’s Friday Night Football clash between the Ottawa Redblacks and the Toronto Argonauts wound up with a little bit of Friday Night Fights thanks to a fourth-quarter brawl. With under three minutes remaining in the CFL contest and Toronto up 28-11, an on-field melee erupted following a play, with lots of pushing and shoving, some apparent punches thrown, and even a takedown move:

Here’s a replay of the brawl, focusing on Argos’ defensive lineman Cleyon Laing (who played collegiately at Iowa State, then came to the CFL with the Argos, left for the NFL’s Miami Dolphins in 2016, came back to join the Redblacks once he was cut, and then returned to the Argos in 2017) and his role in the scrum. Laing is the player who exchanges a lot of shoves with Ottawa offensive lineman Mark Korte (who gives Laing a head-slap at one point) and then wounds up getting taken down near the end of the clip:

Several players were ejected after this donnybrook, and the Argos would go on to win 28-21. That means both of these teams are now 3-12 on the year, so there’s plenty of frustration there, and that boiled over in an obvious way Friday night.