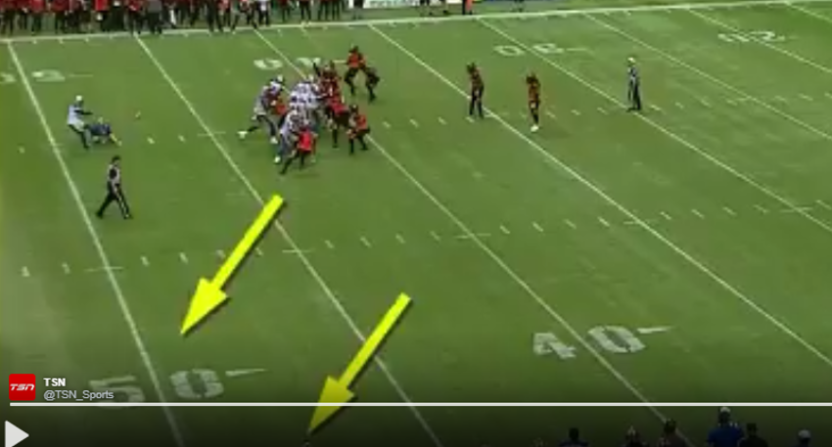 Fake field goals where you pass instead are one thing, but what about kicking the ball to your own team? That’s what the Winnipeg Blue Bombers pulled off against the B.C. Lions in CFL action Friday. With less than a minute left in the first half and the Bombers facing third and 11, Justin Medlock came out for a 49-yard field goal attempt. But he instead booted the ball only about 10 yards forward towards the sidelines, where fullback Mike Miller (who was waiting behind Medlock, and thus onside, but was hiding in front of the Winnipeg bench, so he wasn’t picked up) was able to recover and take the ball inside the 10-yard line, setting up a touchdown pass from Matt Nichols to Darvin Adams:

.@Wpg_BlueBombers pull off ridiculous trick play to set up a Darvin Adams TD near the end of the 2nd. @BCLions lead 27-21 at half. pic.twitter.com/3kS3CdcyOs

This is only possible thanks to CFL rules, which allow any player behind the kicker to recover a punt or a kick. We’ve seen a couple onside punts recovered for touchdowns recently, in 2014 and 2015, and we’ve also seen teams try a pass and then punt, but turning a field goal attempt into an onside kick is even rarer. And unlike some of those other plays, this really only worked because B.C. didn’t notice Miller lurking by the sideline; if they’d seen him, they could have sent someone over to cover that area. But the Bombers were able to catch the Lions napping on this one.

Winnipeg head coach Mike O’Shea had an impressive 16-year CFL playing career as a linebacker, and then was a special-teams coordinator with the Toronto Argonauts for four seasons before getting the Bombers’ job in 2014. So he knows a thing or two about trick plays on special teams, and he’s shown a greater willingness to try them than many of his coaching brethren. And that wasn’t the only crazy special teams play Saturday; another one saw Derek Jones block a punt before it even hit B.C. punter Ty Long’s foot:

.@Wpg_BlueBombers special teams with one of the hardest punt blocks you'll ever see, setting up a @DanLeFevour13 touchdown. WPG leads 7-6. pic.twitter.com/1esan2vosB

However, the trick plays didn’t always work out for them. While up by eight in the fourth quarter, Winnipeg tried a fake punt deep in their own end, and a miscommunication saw Jones not even look for the pass. That led to B.C. tying the game 42-42 with a touchdown and two-point conversion, and they’d go on to win 45-42 following an interception, a field goal and a missed Bombers’ field goal at the end. Still, Winnipeg gave us one of the most amazing and unusual football plays in some time, and for that, we are grateful.