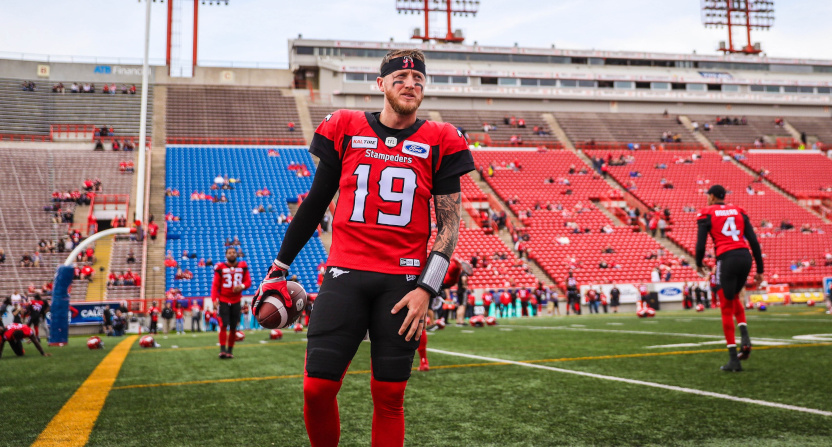 We appreciate athlete honesty around these parts, and Calgary Stampeders‘ quarterback Bo Levi Mitchell certainly delivered that in spades Saturday night. Following the Stampeders’ 41-40 Canadian Football League loss to the B.C. Lions, in a game where they led 31-18 at the half, Mitchell had harsh words for his team. Here are some of those, via Ryan Ballantine at CFL site 3 Down Nation:

“F***ing terrible. It was awful. Everybody, besides Peyton (Logan) who had a great punt return touchdown.”

“Bad penalties, bad decisions, everybody from the sideline to the guys playing on the field. …Everybody was terrible … and I’m not saying I was good, everybody out there.”

“When you score 40 points, you can’t lose the game. A fumble, PI, late hits, holding calls; everything that could go wrong did.”

“I think it shows we aren’t good enough. I said it last time and some guys can get offended if they want to, but I’ve been here a long time. I’m not going to sugarcoat anything. I’m not going to sit here and say we are better than that team we lost to. No, we are not. We lost to them. They put up 500 yards passing, they held us to 200,” Mitchell said, refusing to use the injury bug as an excuse.

“Did we lose three receivers, two DBs, two d-linemen? Yes, but opportunity knocks, just answer it. You gotta step up. It is frustrating because we feel like we should win these games but at this point, as a whole, we are just not good enough to win.”

Those comments show a lot of frustration from Mitchell (seen above in warmups ahead of a 2019 CFL game) and that’s understandable. The Stampeders have faced plenty of challenges this year, including COVID-19 protocols keeping head coach Dave Dickenson out of last week’s game against the Ottawa Redblacks (led by assistant head coach Mark Kilam, they still won that game 17-3) and a 5-3 overall record to date.

And it’s notable that Mitchell included himself in the list of those who came up short. The 32-year-old pivot has been more good than his usual great this year. And while he became the Stampeders’ all-time passing leader (impressive for a team with a long line of great QBs, including Doug Flutie, Jeff Garcia, Dickenson himself, and Henry Burris) Saturday, passing Burris’ mark of 32,191 career passing yards, he only recorded 206 passing yards on the night (leaving him at 32, 392 for his career), completing 18 of 32 attempts for those 206 yards, two touchdowns, and no interceptions. That fell short compared to B.C. star Nathan Rourke, who yet again broke the record he set just week for single-game passing yards by a Canadian QB, completing 39 of 52 attempts for 488 yards and two touchdowns (albeit with two interceptions) and led his team to a great comeback win.

Nathan Rourke connects with Bryan Burnham for a 53 yard TD for the Lions. pic.twitter.com/o1SAKTH6U5

The Lions are now 7-1 on the season, second in the West behind only the two-time defending Grey Cup champion Winnipeg Blue Bombers (9-1 after their first loss of the season to the Montreal Alouettes Thursday). The Stampeders are still in playoff position in third at 5-3, and a fourth-place crossover berth might even be available (the East Division currently has its second and third-place teams at 3-6, and a crossover berth is available if the fourth-place West team finishes above the third-place East team), but the 5-4 Saskatchewan Roughriders are breathing down their necks. We’ll see if Calgary can be less “f***ing terrible” going forward.