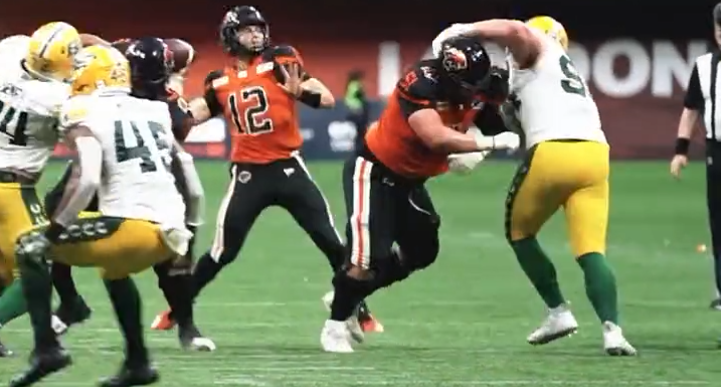 There are many different dimensions of quarterback play, which makes spotlighting the very best performances challenging. What Nathan Rourke did Saturday night for the Canadian Football League’s BC Lions is certainly up there as one of the best CFL performances ever, though, and it’s unquestionably one of the most accurate. In the Lions’ 46-14 home thumping of the Edmonton Elks, Rourke completed 34 of 37 passes (91.9 percent) for 477 yards and five touchdowns with no interceptions, and also rushed five times for 25 more yards and a sixth touchdown. Oh, and he did most of that by halftime:

ITS ONLY THE FIRST HALF 🤯

Canadian quarterback Nathan Rourke is on pace to throw for 10 TDs and over 730 yards 🤯#ForTheNorth | #CFL pic.twitter.com/fLSMV9JIHC

In the first half!

He also chipped in with 17 yards rushing.

Simply put, one of the best halves you'll ever witness from a QB.

The Lions obviously dialed their passing attack back a bit as the game went on with the score being so out of hand (it was 37-7 at the half), so Rourke didn’t put up the raw yardage totals we’ve seen in some other great CFL performances. But his 91.9 percent completion mark was the third-highest in CFL history (minimum 20 attempts), with the only two above that coming from Hall of Famer Ricky Ray in 2013 and 2008 (and Ray went 19/20 and 23/25 in those games respectively, so he threw far less passes than Rourke did). And his 477 passing yards did beat his own record (436, set in June) for most passing yards by a Canadian QB in a single game.

How about that? @nathan_rourke has broken his own record for single-game passing yards by a Canadian QB 🇨🇦

It’s also worth noting that Rourke’s accuracy here looks very good by NFL standards, too, especially when factoring in how many passes he threw. A 91.9 percent completion mark in one game would be the 18th-best all-time in that league (minimum 13 attempts), but the sixth-best with a minimum of 20 attempts. And Rourke completed more passes than any of the players ahead of him on that list.

Granted, the NFL and CFL are very different leagues, and a great performance in one league doesn’t necessarily translate into the other league. But it is notable that Rourke’s numbers here stack up against some of the best we’ve seen in a single NFL game, especially in terms of accuracy. And he threw some pretty remarkable passes too, including this one just inside the end zone sideline to Bryan Burnham (who made an incredible catch):

Here are a couple of Rourke’s other touchdown passes:

This game has pairs of everything 🤷‍♂️

On the year, Rourke leads the CFL with 2,418 passing yards, despite playing in just seven games so far. (The next two players on that list, Dane Evans of the Hamilton Tiger-Cats and Zach Collaros of the Winnipeg Blue Bombers, have played in eight and nine games respectively, but have thrown for 189 and 214 fewer yards respectively.) He also leads the league with 21 touchdowns, and his six interceptions are the second-least of any quarterback who’s played in at least seven games, behind only the Calgary Stampeders’ Bo Levi Mitchell (who’s thrown only four picks). And his 81.3 percent completion mark is the best of anyone with at least 10 attempts (and fourth-best overall, behind only two trick-play specialists and Calgary backup Jake Maier).

The 24-year-old Rourke is in his first season as a CFL starter. He joined the Lions last year after a great college career with the Ohio Bobcats (and following an unsuccessful attempt to catch on with the NFL’s New York Giants as a WR), but was primarily a backup to famed QB Michael Reilly. But Reilly’s offseason retirement paved the way for Rourke to start, and now he’s en route to what could be a very special season. He has the Lions at 6-1 on the year, second only to the 9-0 Blue Bombers. And he delivered one of the most impressive CFL quarterbacking performances ever Saturday.

[CFL.ca; screengrab from a BC Lions video on Twitter]