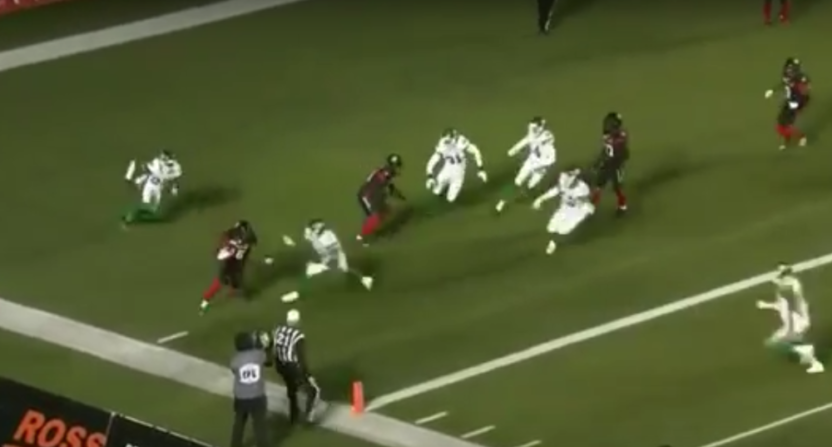 The Canadian Football League’s distinct kicking rules produce all sorts of fun things, including desperation punting-back-and-forth battles, onside field goals, onside punts for touchdowns, and punts everyone stops and stares at. But something that’s uncommon even by CFL standards is having the game-winning point scored on a rouge (or single) from a long punt. That’s what happened Friday night in the Saskatchewan Roughriders’ 18-17 win over the Ottawa Redblacks, though, and it was just part of the overall weird story of that game.

Saskatchewan went into this road game in Ottawa with a 6-6 record versus the Redblacks’ 5-8-1 mark, but this was all Ottawa early. Former NFL quarterback Ryan Lindley (previously of the Cardinals, Chargers, Patriots and Colts, now the Redblacks’ third-stringer, and only playing thanks to injuries to Trevor Harris and Drew Tate) looked better than he did in his poor debut as a CFL starter last week, and he and running back William Powell (who finished with 187 rushing yards on 26 carries, setting a Redblacks’ record in the process) staked Ottawa to an 11-0 lead at the half and a 17-0 lead in the third quarter. Things then started to shift towards the Roughriders, though, starting with Christion Jones’ 97-yard punt return touchdown:

Christion Jones (@jonessboyy) legs it 97 yards to the house! @sskroughriders are back in this one after the huge punt return.#CFLGameDay #Riders pic.twitter.com/7imXwsuMkt

Following that, veteran Saskatchewan quarterback Kevin Glenn (who recorded his 100th career victory here) orchestrated another successful drive with a couple of throws to Duron Carter, and running back Kienan LaFrance dashed in for a six-yard touchdown that made it 17-14 with less than ten minutes left. The Riders’ defense stood stout to get them the ball back, and while they were held out of the end zone on their next drive, Tyler Crapigna tied the game with a 16-yard field goal with just over five minutes left. Saskatchewan’s defense then got them the ball again, and while the Riders’ drive stalled at the Ottawa 45, punter Josh Bartel boomed a punt 55 yards, deep into the Redblacks’ end zone. Quincy McDuffie couldn’t initially field the punt, but he did try to return it out to avoid the single, and he made it almost back to the goal line, but Jeff Knox Jr. made a great special-teams tackle to score the rouge. Here’s video of that:

That play happened with 2:31 left, so there were still plenty of chances for Ottawa. However, the Redblacks went two and out on their next drive, and although they got the ball back one final time with a few seconds left, Lindley was picked off by former Redblack Jovon Johnson to seal the game. It’s appropriate to see a crazy Canadian play in a game between Saskatchewan (the current Roughriders) and Ottawa (the former Rough Riders), and this one certainly was that. It’s also appropriate for the Roughriders to get a game-winning point on a punt single, as their former coach was one of the few with the gumption to try the unconventional punt-for-the-win strategy a few years back. Oh, and Bartel is Australian, and he came to the league through yet another Canadian rule quirk, which counted those who received football training outside Canada as non-imports. So it’s pretty great that he was involved in a supremely Canadian ending.