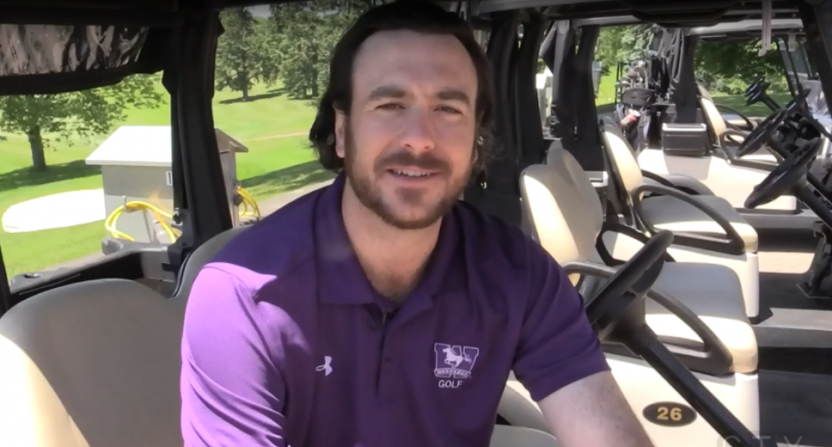 The vast majority of college athletes are college-aged, but some of the stories of those who don’t fit that mold are pretty interesting. From 55-year-old South Carolina State running back Joe Thomas Sr., the oldest NCAA Division I football player ever, to Donovan Tate and Brandon Weeden, who took up college football in their mid-twenties after their baseball careers ended, there have been plenty of older players making headlines. But eligibility restrictions usually mean any athlete is limited to four or five years of a particular college sport…or do they?

As Fitzsimmons notes in the video, this isn’t just about differences between the U.S. and Canada; most U SPORTS (the Canadian NCAA equivalent) athletes are limited to five years of eligibility. But golf isn’t an official U SPORTS sport, and while some U SPORTS conferences like OUA have golf seasons and competitions, the university game is regulated nationally by Golf Canada. As Fitzsimmons says, “As long as you’re a full-time student, you can play.”

And Fitzsimmons has been that. He’s completed a bachelor’s degree (honours) in psychology and a master’s degree in sports psychology with a specialization in coaching, and is now finishing up his Ph.D in sports psychology. He’s been at Western so long that he started back when it was still the University of Western Ontario (the corporate rebranding came in 2012). So he’s been doing plenty of academic work along the way; it’s not a Van Wilder story, although playing college golf for 13 straight years may initially sound like one. But he’s also been excelling on the golf course and serving as a crucial part of the team, with head coach Jim Waite (who’s been in that role since 1991, making him one of the few Mustangs around longer than Fitzsimmons) telling Lale Fitzsimmons has been great for them:

“He plays number one in any tournament we go to, he was the winner of the OUA championship this year, so he still plays really, really well.”

His tenure’s certainly led to team success. They won the OUA title in 2017, a feat they also accomplished in 2010, 2012, and 2013. And back in 2016, Waite told the student paper, the Western Gazette, that Fitzsimmons has also been a key leader in molding young golfers. (Yes, Fitzsimmons has been there so long that there are even years-old stories on how long he’s been there.)

“He stays in touch with the kids all the time and gets them out there for practices and that sort of thing,” said Waite. “He’s an excellent captain on the team. A lot of times I’ll go through him to talk to people on the team. …”Now the negative is that he’s been there all this time and he’s taking up a spot from another young athlete who might’ve made the team. But it’s totally legal and we love having him. If he wasn’t the leader that he was then I might say no, we’re going to go a different route, but he’s such an asset to the team that we wouldn’t even consider that.”

Some opponents, however, have gotten tired of running into Fitzsimmons, and he does hear jokes from them, as he told Lale.

“The classic is if I’m going to be there, they talk about Old Age Security, the Canada Pension Plan,” he said. “One of the guys at nationals thought I’d been here for 17 years and I must be 40 or something like that. People ask me regularly if I’ve got a family and kids, all kinds of fun stuff like that.”

Well, they won’t have Fitzsimmons to kick around for too much longer. He said this season will be his last as he finishes up his degree, and then he’ll really focus on his mental coaching consulting firm Eclipse Performance (which has already seen him advising everyone from the Mustangs to the OHL’s London Knights to the college Fanshawe Falcons). But OUA opponents will still have to face him for one final season. We’ll see if Fitzsimmons can come up with another individual or team title, but regardless of if he does, he’s already authored one of the most unique college athletics careers ever.