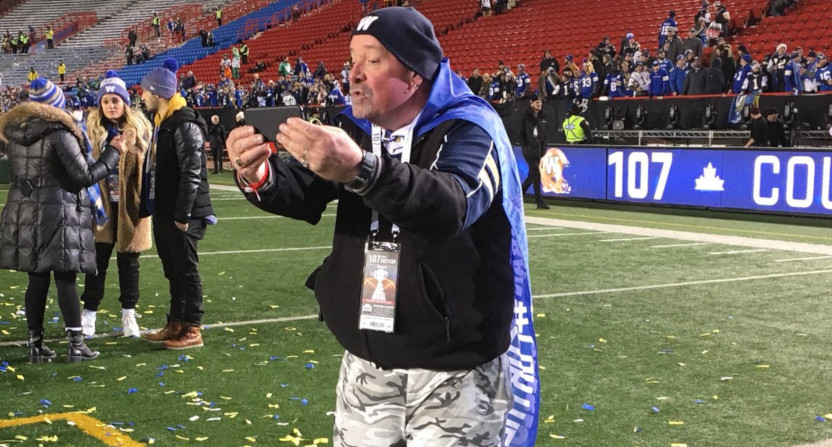 There are always discussions out there of how much people enjoy not wearing pants, but not wearing pants at all for 18 years seems a little difficult, especially if you live in frigid Winnipeg. That’s what Chris Matthew did, though. Back in November 2001, Matthew made a bet that he’d go back to wearing pants once his beloved Winnipeg Blue Bombers won the Grey Cup as CFL champions; however, that year’s Grey Cup saw the 8-10 Calgary Stampeders upset the 14-4 Blue Bombers 27-19, forestalling Matthew’s return to pants. And while the Bombers have come close to ending Matthew’s pantless streak since then, losing Grey Cups in 2007 and 2011, they weren’t able to break it until Sunday when they beat the Hamilton Tiger-Cats 33-12 to win the 107th Grey Cup, their first Grey Cup victory since 1990. And that led to Matthew being on the field afterwards, and to him doing an interview with CBC’s Devin Heroux about his return to wearing pants:

IN PANTS FOR THE FIRST TIME IN 18 YEARS.

Matthew has some great lines there, including “This is absolutely phenomenal. I was ready to just do what I do every Grey Cup, go to a friend’s place, have a couple of wobbly pops and watch the game. And here I am. It’s indescribable, it really is.”

After Heroux says “Obviously, everybody cares about you wearing pants again, but the Bombers have finally done it,” Matthew says “Right, that’s the important thing. My pants, that’s secondary.  I could live, in fact, I’ll probably live in shorts again after this. I’ll take these off. But the fact that the Bombers have won, wow.”

This is Chris Matthew, the guy who always wore shorts. The #Bombers are champs, so Chris can wear pants. pic.twitter.com/aWcAPlYQjV

How exactly does one get away with not wearing pants for 18 years, especially if you live in Winnipeg? That seems rather hard. But as Sarah Petz of CBC Manitoba relayed in her Nov. 11 story on Matthew, he only abandoned his no-pants vow in extreme circumstances:

The only time Matthew will put pants on is if he has to go to a funeral — where the family doesn’t know about the bet.

“If they know about the shorts, I’ll still wear shorts to a funeral,” he said.

…”If they don’t win, I’m fine. I’ve lived with this now for almost 20 years, I can continue, it’s not that big a deal. For their sake and for the sake of every other Bomber fan, I’d like to see them win.”

The best part of Petz’s story may have been the quotes she got from Matthew’s wife Darla, though:

His wife, Darla, says she’s past the point of caring.

“I don’t care. He likes it, and I know that win or lose, he likes the shorts. And he complains, but I think he loves the attention,” she said.

“We have been walking down the street when it’s cold out. and I have a fur coat, and he’s in shorts, and people stare. And I just assure them, yes, he’s an idiot.”

Well, Darla made it to the field too, and she gave Heroux a great interview, especially about her husband’s choice in pants:

“Who picked them?” “Certainly not me. I actually know fashion.” And later, when Heroux says “You put up with it all these years! The shorts!”, Darla Matthew says “Yeah, but he’s such a wonderful man. You pick your battles. And that wasn’t one of them.” She then goes on to say he’s only wearing pants for a day: “He likes wearing his shorts! He’ll go back to them!”