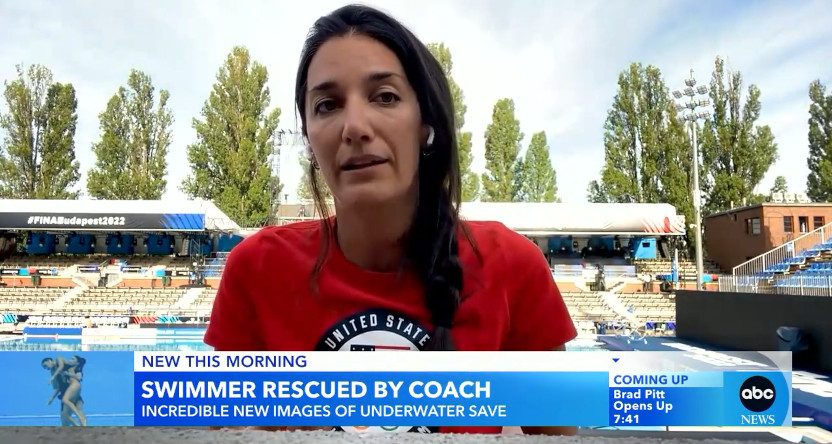 Two-time U.S. Olympian artistic swimmer Anita Alvarez wound up in deep trouble at the FINA World Championships in Budapest Wednesday. During Alvarez’ solo free routine, she passed out under water, and the lifeguard didn’t initially catch that she was in danger. But Andrea Fuentes, the head coach of the U.S. artistic swimming team (and a former star artistic swimmer herself for Spain), did, and she dove in fully clothed and brought Alvarez up for treatment. And AFP photographer Oli Scarff caught dramatic images of the rescue:

An incredible photo by AFP photographer @oliscarff shows artistic swimmer Anita Alvarez being rescued by her coach Andrea Fuentes after fainting at #FINABudapest2022.

As the American artistic swimmer Anita Alvarez fainted and sank toward the bottom of the pool at the world championships, her coach Andrea Fuentes made a split-second decision: She dove in to save her.

American artistic swimmer Anita Alvarez was in danger of drowning after losing consciousness in the pool at the world championships on Wednesday before being rescued by her coach.

Alvarez was immediately given medical attention and is now recovering. https://t.co/hStBgEt5Qx

Fuentes spoke to ABC’s Good Morning America about this Thursday:

And USA Artistic Swimming put out a statement on this Thursday:

As Fuentes notes there, Alvarez is doing okay, and fainting does happen in other sports. “We all have seen images where some athletes don’t make it to the finish line and others help them to get there. Our sport is no different than others, just in a pool, we push through limits and sometimes we find them.” But there’s certainly some added risk from fainting in an aquatic sport, and it’s fortunate that Fuentes was so quick to act here.

The 26-year-old Alvarez, originally from Amherst, New York, represented the U.S. in artistic swimming in both the 2016 and 2020 Summer Olympics. She was named the USA Synchro Athlete of the Year (along with Mariya Koroleva, who she’s often teamed with in duets) in both 2016 and 2019. In these championships, she competed in four preliminary and three final competitions across six days. She may still be able to compete in Friday’s team final; as per a USA Artistic Swimming statement to the Associated Press, that will be up to her and to medical staff after further evaluations. But it’s certainly fortunate that this incident Wednesday worked out the way it did.