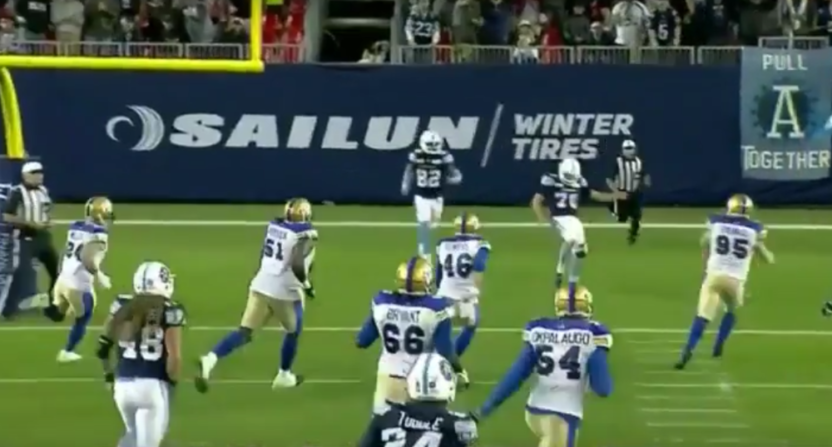 The CFL is known for wacky kicking situations thanks to its rouge rules, which award a single point for a missed field goal or punt that travels through the end zone or isn’t returned out of it. That’s led to punts back and forth to avoid a game-ending single, pass and punt plays, punts everyone stands and looks at, attempts to punt for the win instead of kicking a final field goal, and actual victories thanks to a punt single, and it created Saturday’s game-ending play between the Toronto Argonauts and Winnipeg Blue Bombers, where the hero was Toronto punter Lirim Hajrullahu:

This all happened because Bombers’ kicker Justin Medlock missed a game-ending 40-yard field goal. His kick still could have tied the game at 29 and sent it to overtime if it had gone through the end zone or not been returned out of the end zone, though, so Hajrullahu made a great play to first catch it and prevent the rouge. Winnipeg players downfield could then have tackled Hajrullahu if he’d tried to just run it out, though, and that would have still scored a rouge, so it was smart of him to punt it away. (This wouldn’t be a good play during the game, as it would return possession to the Bombers with a new set of downs instead of giving the Argos the ball after the single, but in a game-ending situation, it’s the perfect play to make.)

What was really smart was putting that return punt out of bounds to end the game and give Toronto the victory. That’s a nice contrast from a game-ending play the Argonauts were on the wrong side of against the Montreal Alouettes back in 2010:

That was a similar setup, as it started with a missed field goal from Montreal kicker Damon Duval. However, what changed back in 2010 was that the player who was able to knock the ball down and prevent the single wasn’t a kicker, but Toronto receiver Mike Bradwell. (Kicker Grant Shaw and punter Noel Prefontaine were back there as well, but that ball went to Bradwell.) So his punt out of the end zone wasn’t as good as you’d expect from a kicker (he also had to dive for the ball in the first place and then get up, so this was more rushed than Hajrullahu’s punt), and it stayed in bounds and was collected by Duval himself, who was able to punt it back into the end zone and try for another single. Shaw made a good play to block that, but his own hasty drop kick didn’t clear the end zone, bouncing off a couple of players before Montreal’s Dahrran Diedrick fell on it for the game-winning touchdown.

So, given what happened to them in 2010, it’s perhaps appropriate that it was the Argos again involved in a desperate game-ending situation where they needed to punt to avoid a rouge. And this one worked out a lot better for them, and they can credit Hajrullahu’s excellent punt for that. That’s an important win for Toronto, improving their record to 8-9 and putting them in first in the East Division, and it also meant that 11-5 Winnipeg can no longer catch the 13-2-1 Calgary Stampeders for first in the West. And it was all thanks to a punt.