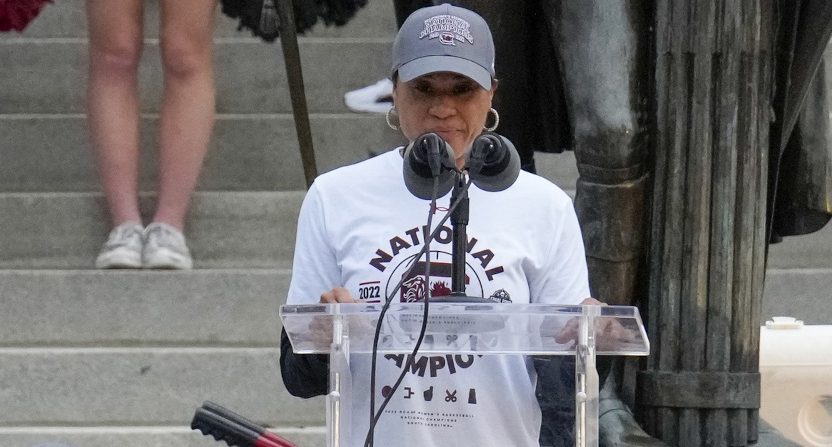 Five months after she was initially detained in Russia, WNBA and U.S. Olympic basketball star Brittney Griner remains there. Griner’s trial began Friday, but many have expressed little hope it will be fair, with Kennan Institute acting director William Pomeranz telling The New York Times‘ Jonathan Abrams and Talia Ganguli “The Russian judicial system says they really should not go to trial unless the defendant is going to be convicted. …There’s no presumption of innocence, really.” That’s added to the urgency for Griner’s family, friends, and supporters, who have been leading pressure on the U.S. government (which classified Griner as “wrongfully detained” back in May, signaling they would try to work to get her home) to make a deal to get Griner out of Russia. And Dawn Staley, the head coach of the reigning NCAA champion South Carolina Gamecocks and the head coach of the 2020 Tokyo Olympics gold medal-winning Team USA (which included Griner), added to that pressure with a tweet Tuesday specifically asking U.S. president Joe Biden to intervene:

#FreeBrittneyGriner 138 days our friends and sister @brittneygriner has been wrongfully detained in a Russia prison. @POTUS can you please read her recent cry to you and prioritize as if she was one of your kids…please. Finally Lord God your grace is needed right now. #WeAreBG pic.twitter.com/dbRCjRJE7g

Here are some excerpts from that letter that Staley (seen above speaking during the Gamecocks’ championship parade in April) is referencing:

NEW: A letter from Brittney Griner was sent to the White House today, making a direct appeal to President Biden for her freedom. Representatives shared the following excerpts: pic.twitter.com/pvh4IpOfou

It’s certainly notable to see Staley, one of the highest-profile figures in women’s basketball, not only continue her support for Griner, but do so with a tweet tagging the president. We’ll see what happens with Griner going forwards.