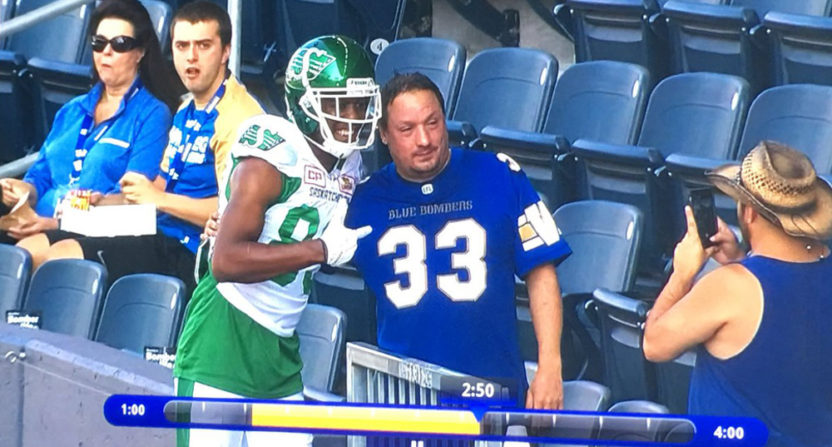 Duron Carter has had quite the remarkable football career, and he added another chapter in Saturday’s Banjo Bowl. Carter now plays for the Saskatchewan Roughriders, and in their 38-24 Labour Day Classic home win last week against the Winnipeg Blue Bombers, he had a great game (including a one-handed catch), but later complained of being spit on by a travelling Winnipeg fan, called Bombers’ fans “the worst in the league” and said he couldn’t wait to beat them in Saturday’s rematch in Winnipeg:

This is before a trash ass bombers fan spit on me… Worst fans in the league… can't wait to kick y'all ass again! https://t.co/ezU9XHbhqD

Wow! That's him with the blue and gold face paint! https://t.co/7J8uGT8zQx

The worst part about it, he definitely didn't brush his teeth in about 20 years!!! Who knows what creepy crawlers were hiding in there!!!

During the week of buildup to the Banjo Bowl rematch, though, Carter told media he was upset about the spitting incident, but didn’t want to press charges, and was totally fine with any jeers from Bomber fans:

He said Tuesday he expects to hear “a bunch of people yelling at me,” but he can accept that. He also can handle signs and “anything creative” that Bombers fans want to do.
“Anything outside of physically touching me, go ahead!” Carter said. “I love it.”

And he proved that Sunday, praising Winnipeg and even taking photos with Bomber fans in the stands ahead of the second half:

Duron Carter: "I love this atmosphere. It doesn't get any better." A week after he was spat on. That's classy. #CFL

Carter also made a huge impact on the field, catching a deep pass from Kevin Glenn and taking it 88 yards for a touchdown:

That was Carter’s sixth consecutive CFL game with a touchdown, a very impressive stat. He’s done an excellent job with the Riders this year, recording 49 catches for 637 yards and eight touchdowns heading into this game, and further proving that Montreal was wrong to release him late last year.

Carter, the son of Pro Football Hall of Famer member Cris, has had a nomadic football career, with NCAA stints at Ohio State, Coffeyville Community College, Alabama, and Florida Atlantic (he only actually played at the first two), a strong CFL stint with Montreal in 2013 and 2014, a stint with the NFL’s Indianapolis Colts in 2015 and a return to Montreal for 2015 and 2016 before he signed with Saskatchewan this season (his release came after last year’s trade deadline, so he couldn’t sign with another team until the offseason). But he seems to be fitting in very well with the Roughriders, and he’s even helped them up their celebration game, from the shuffle above to all the different ones in this video:

? | There's no shortage of creativity in Riderville…?✈️?

Here’s what Carter told CFL.ca’s Kristina Costabile last week about the celebrations, and how they come up with them:

“The celebrations, to tell you the truth, they really come from just anybody,” Carter admitted. “We’ll be in the locker room and we’ll be joking around or we’ll see something on TV on TSN, and anything that comes in our head, we’ll choreograph and get it done.”

In order for a celebration to come to life on the field, each and every receiver has to agree. If not, it’s scrapped and they move on to the next idea.

“Everybody has to approve of the celebration,” said Carter. “There can’t be one guy that’s like, ‘oh no, I don’t like that one!’ Everybody approves. And it’s all the receivers whether it be me or Naaman (Roosevelt) or Bakari (Grant). Anybody that comes up with the celebration we all have to approve and we’re all going to do it 100 per cent.”

They certainly have done that, and that group of receivers has helped the Riders turn things around on the field as well. After a 5-13 season last year, Saskatchewan was 5-4 heading into this game. Carter’s been a big part of that, and he seems to be adjusting well to life in the Riders’ offence. There’s still a ways to go (5-4 is still last in the CFL’s tough West Division, and Saskatchewan lost 48-28 Saturday, so they’re now 5-5), but he seems to have found a team where he fits in well, and he’s impressing both on and off the field. We’ll see what’s next for him.