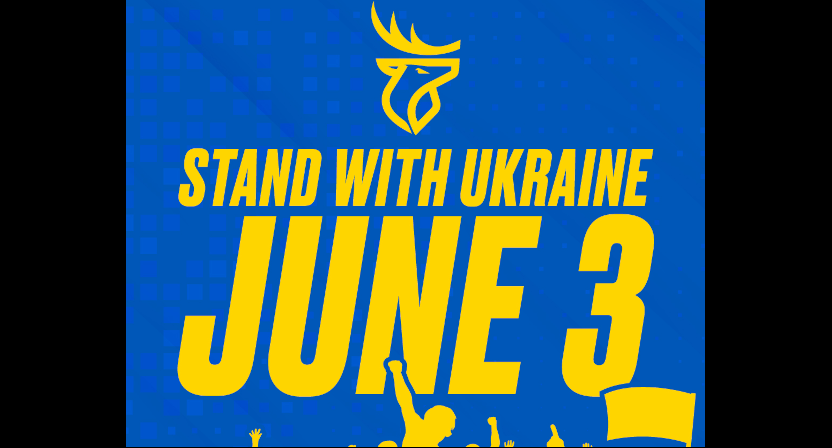 The invasion of Ukraine by Russia has led to lots of impacts on the sports world. The latest interesting response is an initiative the Canadian Football League‘s Edmonton Elks announced Thursday. The Elks are designating their first home preseason game, on Friday, June 3, as “Stand With Ukraine Night,” with tickets $15 and all proceeds going to the Canada Ukraine Foundation, which will use the money to support Ukrainians who are resettling in Alberta:

On June 3rd join us and #StandWithUkraine!

🎟️ALL tickets to our pre-season game vs. @calstampeders are $15.

As Caley Gibson writes at Global News, the game itself will feature many blue and gold elements in the stadium, and a lot of local groups helping the team recognize Ukraine. The Viter Ukrainian Folk Choir will perform the Ukrainian national anthem ahead of the game, and more than 200 Ukrainian bilingual students from the Edmonton area will also provide a performance. And halftime will see Edmonton’s Ukrainian Shumka dancers performing the traditional Hopak dance. Beyond that, Gibson relayed many quotes on the importance of this move:

“As a community-owned team, we have a responsibility to give hope, inspiration, and provide action to Edmontonians on important issues. Supporting the people of Ukraine is a cause that resonates throughout our community, given our city’s deep ties with the Ukrainian people,” said Elks president and CEO Victor Cui.

“Our club has a unique opportunity to do something large scale, bringing together more than 50,000 people for a shared moment of solidarity with Ukraine.”

…“I am so pleased to see such an important, community driven initiative that will change the lives of so many people underway in our city,” said Mayor Amarjeet Sohi. “Edmontonians are caring and compassionate people and it makes me proud to see all of the ways the Elks are supporting the people of Ukraine.”

…“Ukrainian Albertans have contributed so much to our province’s communities, culture and economy. As the minister of culture also responsible for sport, it is inspiring to see the crossover between sport, culture and support for the people of Ukraine,” said Minister of Culture Ron Orr.

“Thank you to the Edmonton Elks for their continued dedication to social responsibility and community, and for supporting a cause that holds a special place in the hearts of many Albertans.”

As Gibson notes, there’s a strong history of Ukrainian settlement in Alberta and nearby provinces, with the Ukrainian Canadian Congress of Edmonton estimating that Alberta alone has 350,000 people of Ukrainian descent (of a total population of 4.5 million). So this is something that means a lot to many there. And as of early April, the Canadian federal government had processed more than 41,000 Ukrainians to enter Canada, so there are many who can benefit from the funds raised here. It’s neat to see the Elks doing this, and this may wind up being quite an impactful event.