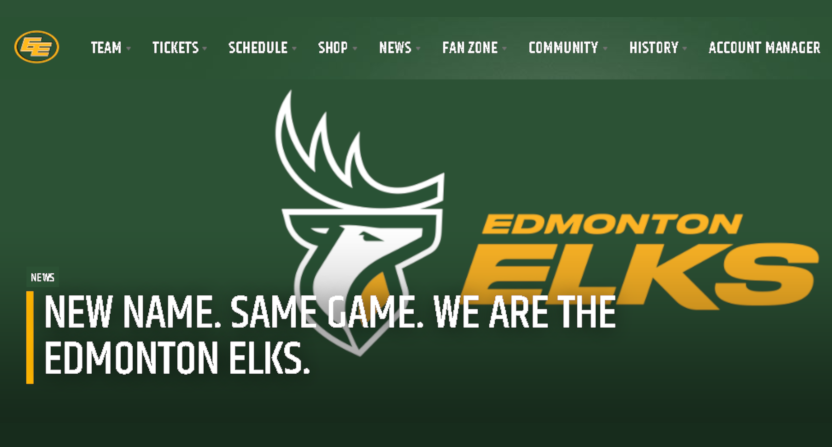 Almost a year after announcing they would change their name from “Edmonton Eskimos,” the Edmonton Canadian Football League team (known in the interim as “The Edmonton Football Team,” much like Washington) has revealed their new name. That’s going to be the Edmonton Elks. Here’s the video they put out announcing the move:

This team does have some past history as the Elks. While the current team was officially founded in 1949, a predecessor, the Edmonton Rugby Foot-ball Club, went through names of Edmonton Esquimaux (1908-1909), Edmonton Eskimos (1910-21, 1923-24), and Edmonton Elks (1922, when they won the Alberta Football Rugby Union and Western Canadian Football Rugby Union championships, then lost the Grey Cup game against Queen’s University). That’s part of why Elks was an oft-discussed candidate during this renaming, and it also seems like a good fit on other levels; it lets the team keep the often-used “EE” branding, and Alberta has an estimated 20,000 elks (out of an estimated 72,000 in Canada), so the name’s a fit for the region. And it’s led to some cool-looking logos and merch, as illustrated in this tweet from team radio broadcaster Morley Scott:

As per the pluralization here, while many people commonly use “elk” rather than “elks” for even a large group of the animals in question, “elks” is Dictionary.com’s preferred plural noun for a larger group of the animals. So this does work on that level. There may be some initial confusion with the Benevolent and Protective Order of Elks (known for the Elks Lodge and so on), which is what people are usually referring to with a capitalized Elks, but it should be pretty clear from context if something’s about a CFL team or a fraternal order.

The next question for the rebranded Elks is when they’ll first get to play under that name. Yes, the CFL’s is currently planning on a start date of Aug. 5 (after cancelling last season over COVID-19 issues), but that’s subject to some remaining governmental approvals and isn’t a done deal yet. Reports about a definite start date distributed to players and agents still appear premature at this point, and there are still lots of questions about if fans will be allowed in the stands (a key part of making a CFL season work economically, according to the league), and if so, how many (and if it will be the “significant amount” the league’s pushing for). Training camp may also be shortened, with Montreal Alouettes’ president Mario Cecchini recently saying the CFL’s unlikely to have preseason games this year. So there’s a lot that’s still up in the air for the 2021 CFL season. But at least we now know the name the Edmonton team plans to use going forward.

[Esks.com, which will probably be changing names shortly]