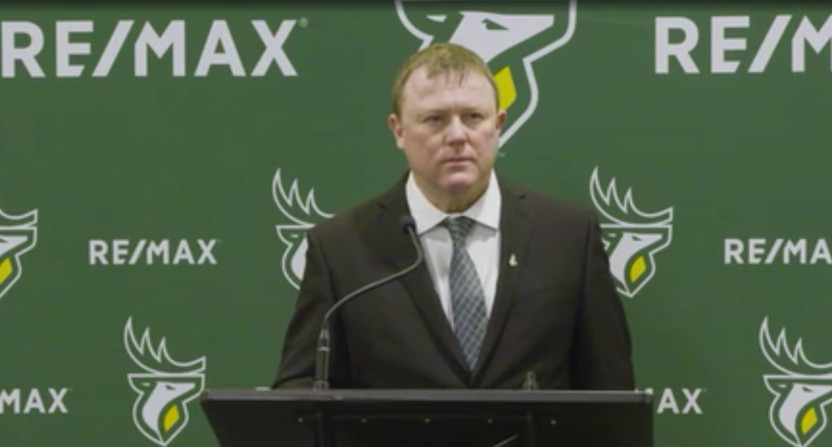 One of the more fascinating storylines in the Canadian Football League this year has been the return of Chris Jones. Jones made plenty of waves in the CFL in his first-go round from 2002-2018 with the Montreal Alouettes (2002-07, first as defensive line coach, then as defensive coordinator for his last five years there), Calgary Stampeders (2008-11, first as DC, then as DC/assistant head coach/assistant director of player personnel), Toronto Argonauts (2012-13, as DC/AHC/assistant general manager), Edmonton Eskimos (2014-15, as head coach), and Saskatchewan Roughriders (2016-18, as head coach, general manager, and vice-president of football operations). Since then, he’s spent time as a defensive assistant with the Cleveland Browns (2019) and as the head coach his alma mater of South Pittsburg (TN) High School, which he declared to be his “dream job” in April before abruptly leaving them in September to take a job as a “defensive consultant” with the Toronto Argonauts. And, now, he’s been named the new head coach and GM in Edmonton with the (recently-rebranded) Elks:

Jones is certainly proven as a CFL mind at this point. He’s found a lot of success as a defensive coordinator, including Grey Cup wins in 2008 and 2012 (plus his 2002 win as the Als’ DL coach), and he’s been a good head coach as well, winning the title with the Eskimos in that role in 2015. However, his resume as the one man in charge of personnel has some more questions.

The only time Jones has been solely in charge on the personnel side was in Saskatchewan (which he went to from Edmonton immediately after winning that 2015 Grey Cup, citing that promotion as a reason), and that tenure was far from perfect. Yes, the Roughriders went from 3-15 the year before he arrived to 12-6 in his final year. But their best playoff run was an East Final (crossover) loss to the Toronto Argonauts in 2017, and there were lots of questions that arose along the way, including about his squads of non-roster players practicing with the team in 2016, which led to a $60,000 fine for “compromising the reputation of the CFL.”

Jones certainly has an eye for talent, and he has found some great players (and even done some unconventional things to develop notable players, such as switching A.C. Leonard from tight end to defensive end). But having him as the top mind on the personnel side in addition to the coaching side is far from proven at this point. And it’s worth noting that there have been very few figures in CFL history who have done well handling both the top coaching and personnel responsibilities. Calgary/BC figure Wally Buono is the main one, but for every Buono, there have been many coaches who haven’t done well with full personnel control and GMs who haven’t done well as sideline leaders.

Beyond that, the other notable question is if Jones will actually stay with the Elks as long as they’d like him to. Most of his CFL jobs so far have led to him leaving for something bigger and better before the contract expired. That includes him joining the then-Eskimos, him leaving them after the Grey Cup to take coach/GM role in Saskatchewan, him leaving Saskatchewan weeks after signing an extension to head to the NFL’s Browns, and him deserting South Pittsburg HS for the “defensive consultant” role with the Argos. Here’s what Elks’ board chair Ian Murray said on that Tuesday:

Chris Jones signs a four-year deal and according to #Elks Board Chair Ian Murray, Jones has committed to staying for the full tenure of the contract. #CFL

It’s very funny to hear someone say “committed to staying for the full length of the contract.” That is generally the idea of a contract. And, yes, that’s not always fulfilled, maybe especially in football, but there’s nothing yet to indicate this contract is any more durable than the previous ones Jones has exited. Maybe there is actually a significant exit penalty clause or something to keep him there, or maybe the board thinks the full control here is enough to keep him from leaving (at least for another CFL job). But there are plenty of skeptics as to if Jones will actually remain in Edmonton for the full four years of that contract. We’ll see how his tenure with the Elks goes.