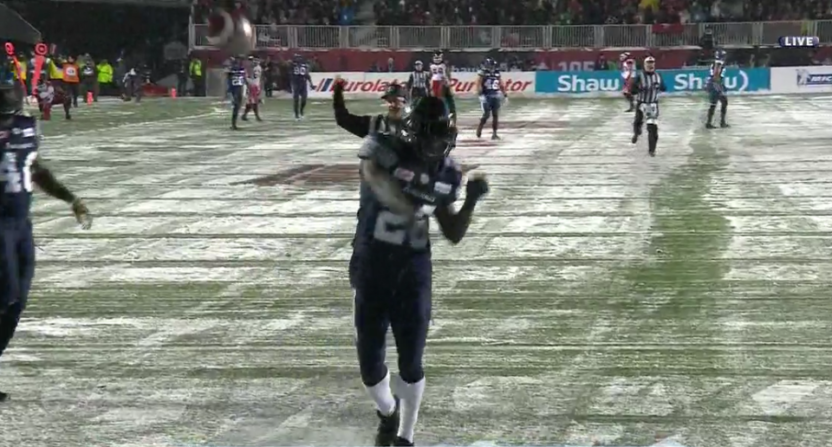 The 105th Grey Cup was played between the Calgary Stampeders and Toronto Argonauts in a heavy snowstorm in Ottawa Sunday night, and it eventually wound up with a 27-24 Argonauts’ win. But there were a whole lot of bizarre moments that led up to that. Here are five of the zaniest, plus two honourable mentions.

Honorable mention: Alex Singleton recovers a Calgary fumble. The slippery conditions led to plenty of odd moments, but this was one that could have been even more unusual than how it wound up. With 8:55 left in the game and the Stampeders leading by eight, a Toronto punt turned into a fumble by Calgary returner Roy Finch. However, Stampeders’ linebacker Alex Singleton saved the day by diving on the loose ball.

Honorable mention: Calgary’s first two-point convert hits the crossbar: The CFL goal posts are at the front of the end zone rather than the back to avoid making field goals too difficult (thanks to the 20-yard end zones), and that occasionally leads to them interfering in the play. On Sunday, that led to Stampeders’ quarterback Bo Levi Mitchell hitting the crossbar with a pass on a two-point conversion attempt:

5. High snap leads to Calgary punter Rob Maver kicking the ball out of his own end zone for a safety: This was an unusual play, but one that was probably the right move at the time. With the Stampeders facing third down and 20 on their own 35 with 5:34 to go in the first half, the snap sailed over Maver’s head. With a Toronto player chasing him, though, he made the smart move to just kick the ball out the back of the Stampeders’ end zone for a safety rather than try and recover it and punt it, which might well have led to a turnover and a game-tying touchdown for the Argonauts. Maver’s move prevented that, and led to Toronto getting the ball back much further from the end zone. In the end, Calgary would take a 17-8 lead into the half.

4. Shania Twain’s halftime entrance: Shania Twain did the halftime show, and her entrance was perhaps the most Canadian thing imaginable, between the dogsled and the Mountie escort:

2. The game-sealing pick: In the final moments, Calgary was in position for a game-tying field goal or a game-winning touchdown, but Bo Levi Mitchell’s end-zone pass was picked off by Toronto defensive back Matt Black, sealing the game. That was particularly notable, considering that Black was in his ninth season with the Argonauts and that he had been cut (and then brought back) earlier this year. He was the perfect guy to seal this one for Toronto.

1. The 109-yard fumble return touchdown: This was also a Grey Cup record, and it wound up swinging the game. With just under five minutes left and Calgary up 24-16, the Stampeders looked set to seal the game with a touchdown after setting up a first and goal at the Argonauts’ eight-yard line. But Toronto defensive tackle Cleyon Laing forced receiver Kamer Jordan to fumble, and Argonauts’ defensive back Cassius Vaughn recovered and took the ball back 109 yards for a touchdown, setting up a two-point conversion that would tie the game.

Toronto then scored a field goal, paving the way for Calgary’s game-ending pick. Overall, it was a remarkable Grey Cup, one that saw the 9-9 Argonauts defeat the 13-4-1 Stampeders, one of the craziest weather games in some time, and one that will be remembered for years to come.