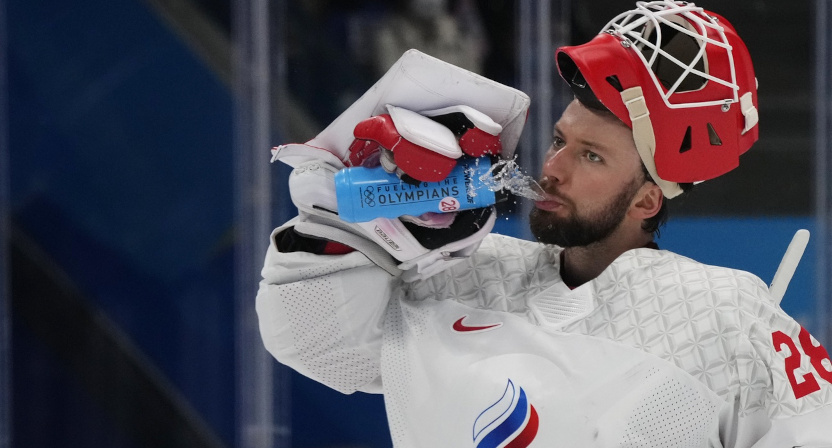 It looks like one of the Philadelphia Flyers’ off-season additions will not be joining them this fall. The NHL’s Flyers signed 25-year-old Ivan Fedotov in May, and expected him to compete for a spot on their roster. But Fedotov has now been sent into the Russian military, as per comments from his agent J.P. Barry to The Associated Press:

Philadelphia Flyers goaltending prospect Ivan Fedotov, who reportedly was picked up by law enforcement in Russia last week ahead of a planned move to the U.S., is now at a remote military base in northern Russia, his agent said Tuesday.

The agent, J.P. Barry, spoke with The Associated Press amid speculation about Fedotov’s well-being. The situation raised fresh concerns over whether Russian players will be willing or able to join National Hockey League teams that draft them this week as the war in Ukraine continues.

…The first sign something had gone wrong for Fedotov came Friday. Russian media said he was picked up by law enforcement outside a hockey rink in his home city of St. Petersburg, where he’d been filming a documentary with a TV crew, and taken to a military enlistment center. Local news site Fontanka reported he was suspected of evading compulsory military service required of Russian men.

Alexei Ponomaryov, a lawyer representing Fedotov, told Russian news agency RIA Novosti on Saturday that Fedotov had been taken to a military hospital with apparent stress-induced gastritis. Ponomaryov said he and Fedotov’s relatives had not been allowed to visit.

…“We have a draft in line with the law, so any emotional commentaries would be utterly inappropriate,” Kremlin spokesman Dmitry Peskov said Monday when asked about Fedotov’s case. “There are certain reasons for deferments and various ways of undergoing military service for athletes.”

The 6’7”, 205-pound Fedotov was born in Lappeenranta, Finland, but has been playing in the Russian-run Kontinental Hockey League since 2014. The Flyers drafted him in the seventh round of the 2015 NHL draft, but he didn’t look set to go to the U.S. until this year. Fedotov’s stock is particularly high at the moment thanks to his performance for the Russian Olympic Committee team (Russia as a country was officially banned over doping violations) in the 2022 Beijing Olympics, where he was the starting goalie for that silver medal-winning team. He also led CSKA Moscow to the Gagarin Cup as KHL champions. But he didn’t have a current KHL contract heading into next season, which allowed him to sign with the Flyers.

The compulsory service mentioned there is an interesting note. As that AP piece mentions, Russia theoretically has a draft that can select any man between 18 and 27 for compulsory military service. But many Russian men never serve in the military; in addition to those never selected, there are many options for educational or medical exemptions or deferments. And many athletes in particular are “selected,” but then picked to keep competing while they serve (not unlike how some U.S. service academy graduates receive military service deferments if they’re drafted high enough by a professional team). The Fedotov situation looks to differ from that, though; he looked set to leave and play in the NHL until this situation happened, and it doesn’t appear that the Russian military will have him “serve” by playing sports.

There’s a larger conversation here on several fronts. For one, Russia is actively holding an American athlete, WNBA star Brittney Griner (who’s considered “unlawfully detained” by the U.S. state department, and who has many in the U.S. lobbying for her release). The Fedotov situation is more murky than Griner’s, and he’s not an American citizen, so it’s unlikely there would be as much of a U.S. push to get him out even if the Flyers and/or the NHL exerted influence there. (And the significant U.S. push on Griner has not appeared to have accomplished much so far.) So there may not be a whole lot anyone outside Russia can do for Fedotov at this time.

But there’s also a wider discussion to be had here about Russian hockey players, especially those already in the NHL. The NHL has long had significant numbers of Russian players. And while the league severed its own ties with the KHL after Russia’s invasion of Ukraine, and the International Ice Hockey Federation suspended Russia and Belarus from its competitions (a ban further upheld Tuesday), and the overarching major junior hockey governing body (the Canadian Hockey League) banned Russian players from its import draft, the NHL has not yet implemented any penalties for individual Russian athletes (despite some commentators calling for that).

But while NHL punishment for individual athletes remains unlikely, there are questions for Russian players (including the Flyers’ Ivan Provorov) on if they can or should go home this summer. And those are more notable still considering this apparent conscription of Fedotov. There are also even more questions than usual for NHL teams on if they should consider Russian players in this year’s draft (which begins Thursday). We’ll see what happens with Fedotov going forward, and what happens with other Russian NHL players and prospects.