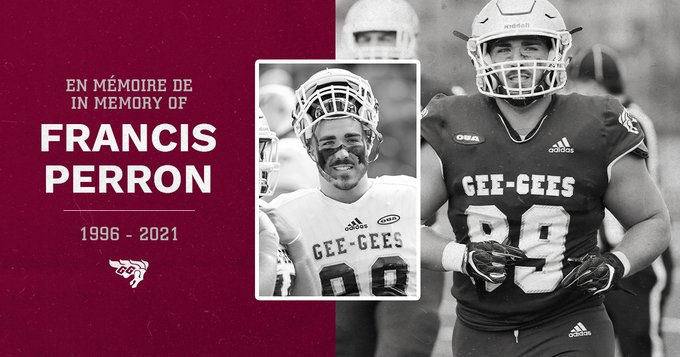 Canadian university football is back this year after skipping the entire 2020 season due to the COVID-19 pandemic, but this U SPORTS season has already seen a tragic loss. The Ottawa Gee-Gees lost 11-10 on the road against the University of Toronto Varsity Blues Saturday, and on Sunday, Ottawa announced that fifth-year defensive lineman Francis Perron passed away after the game. He was 25.

It is with extremely heavy hearts that we share the news that we have lost one of our own. Fifth-year defensive lineman Francis Perron passed away yesterday in Toronto.

We are heartbroken and pulling together as a family. This will not be easy, but we will do it together. pic.twitter.com/827zHXyMY9

No details on Perron’s death have yet been released. Here’s more from a letter from uOttawa president and vice-chancellor Jacques Frémont, which was posted to the Gee-Gees’ athletics site:

Dear Members of the University Community,

It is with a very heavy heart that I bring you some very sad news. Over the weekend, Francis Perron, one of our Mechanical Engineering students and a defensive lineman in his fifth season with Gee-Gees football, died shortly after a game between uOttawa and the University of Toronto.

A bright, passionate, and caring person, Francis poured himself into his craft as a player and his academic pursuit of becoming an engineer. In the classroom, he was as big of a star as on the field, becoming a multiple-time U SPORTS Academic All-Canadian while studying Mechanical Engineering.

Originally from Sherbrooke, Quebec., Francis first joined the Gee-Gees football team in 2017 after a stellar career at Cégep de Sherbrooke. Francis’ love for the game was present in his play, but even more so in the relationships he built with his teammates.

Francis’ memory will live on through a vast network of loving family, friends, and all those whose lives he touched.

Tim Baines of The Ottawa Sun has quotes from Perron’s coach and athletic director:

“Our hearts are broken,” said Gee-Gees head coach Marcel Bellefeuille. “In losing Francis, we’ve lost an outstanding person, teammate, player and veteran leader that made us better in every way possible. He was someone that loved and was loved, by everyone that is a part of our program. We are pulling together as a family and giving everyone the best support possible as we navigate this very difficult situation. Our thoughts are with his family and loved ones during this unimaginable time.”

…“We are devastated by the tragic news of Francis’ passing,” said Sue Hylland, director of varsity athletics at uOttawa. “Francis exemplified everything it means to be a Gee-Gees student-athlete and representative of our sports community at uOttawa. We have ensured that our football program, as well as all Gee-Gees athletes and staff, have support resources available to them throughout this difficult time.

“We are very grateful for the therapy staff, first responders, nurses, doctors, and everyone on-site at the University of Toronto that did absolutely everything they could to help Francis. Our thoughts and deepest condolences are with Francis’ loved ones, teammates and everyone he touched.”

As Baines notes, this is the second tragic death of a player from the Gee-Gees’ football team in the past few years. 24-year-old defensive lineman Loic Kayembe passed away suddenly in his sleep back in 2017.

Our thoughts go out to Perron’s family and friends, and to the Gee-Gees’ team and community in the wake of this loss.

[GeeGees.ca, The Ottawa Sun; photo from @UOttawaGeeGees on Twitter]