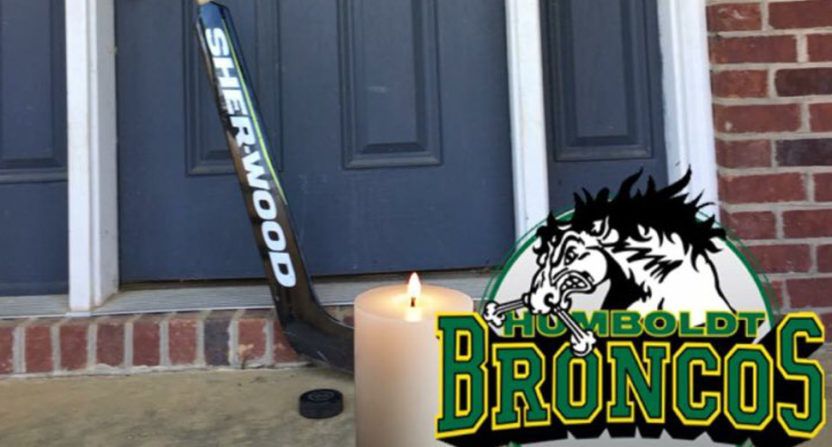 The Humboldt Broncos’ bus crash Friday that killed 15, including players, coaches, a statistician, a broadcaster, and the bus driver, has sparked plenty of tributes  and donations from across the hockey world. The aftereffects continued to ripple Monday, especially with the news that one victim had been incorrectly identified at first and the discussions of recovery efforts for paralyzed survivors like Ryan Straschnitzki.

But there’s one particularly interesting gesture spreading as a way to show those affected they’re on the minds of the hockey community, with people across Canada and the world leaving hockey sticks out in tribute. It started with TSN 1290 Radio Winnipeg Jets broadcaster Brian Munz, who previously called games in the SJHL (including with the Broncos) for five years, and posted a text he received from a buddy in Humboldt Sunday:

Got this text from a friend who I went to high school with in Humboldt.

Inviting you to do the same as we remember and send our thoughts to the #HumboldtBroncos.#PrayersForHumboldt #Broncostrong #Humboldtstrong #theSJHL #TSNHockey pic.twitter.com/HHwZyUZ5KG

And that’s caught on like wildfire, across Canada and beyond. A lot of great responses can be seen on the #PutYourSticksOut hashtag. Here are some of them:

We are with you in Yorkton pic.twitter.com/gZ96sfZ22G

“maybe we should leave some sticks by the rink tonight buddy”….. “dad, I like that idea” #HumboldtStrong pic.twitter.com/ZCQxdkx3sO

Here’s a couple outside our door in Kelowna. They’re kids sticks. Those Humbolt boys and young men were kids not too long ago… #HumboldtStrong pic.twitter.com/Kysn4g4223

HUMBOLDT: Absolutely love this campaign. Tonight, my family and I put out a pair of hockey sticks for the boys in case they need them up in heaven. I also put out a headset for Tyler Bieber. Our home now has 15 porch lights that we will keep on for the boys… #PutYourSticksOut pic.twitter.com/bazCXxqfAt

Thinking of the good people of Humboldt here in Melbourne, Australia. #PutYourSticksOut pic.twitter.com/Hw0WkTGla8

#PutYourSticksOut #Humboldtstrong and of course, something for the staff…. pic.twitter.com/F18XmWEyRg

I’m not Canadian, I’m from Kentucky but I played junior hockey. I remember those bus rides years ago. I’m very saddened by this news and I am with those in the Humboldt community. #putyoursticksout pic.twitter.com/0TLwAwML7D

Easiest decision ever. Just in case they want to play hockey in the sun for a bit, here’s one left out in Phoenix. #HumboldtStrong pic.twitter.com/Oga4wiLjo1

Florida is a long way from western Canada, but just in case the boys need one more…#PutYourSticksOut #HumboldtBroncos pic.twitter.com/xXqkNpqTrK

It's the only stick this Texas girl owns and the boys will have to be desperate to need it, but it's theirs just in case. Sticks out, y'all. #putyoursticksout pic.twitter.com/U2oQhuVa1h

Leaving these out tonight in Dublin Ireland. Even this far away, the Broncos accident saddens people deeply. As someone whose been on such busses many moons ago, I can’t fathom the heartbreak of those close to the tragedy. #PutYourSticksOut #HumboldtStrong pic.twitter.com/0NsZ8NFVxj

Famed former women’s hockey player Hayley Wickenheiser, a Saskatchewan native, joined in with a special stick she put out ahead of her trip to Humboldt to help honor the lost at a special concert by Canadian country musician Paul Brandt:

Jumping on a ✈️ to be w/ @paulbrandt and honour those affected. Left my stick out front, not just any stick, my first hockey stick ever, from Shaunavon. Classsic wooden Titan. Hope the boys don’t use it, nothing but muffins coming out of that thing! #humboldtstrong pic.twitter.com/jb3TnTRN0t

And the U.S. embassy in Ottawa joined in, as did the Surrey, B.C. detachment of the Royal Canadian Mounted Police:

In support of all those impacted by the tragedy in Saskatchewan. Our thoughts and prayers are with you. #HumboldtStrong #PutYourSticksOut pic.twitter.com/FIYdqs5w0A

It may be a simple gesture, but it’s one that’s touched a lot of people and illustrated the global effects of this crash. And it’s an example of the many ways the hockey community has come together in the wake of this awful tragedy.