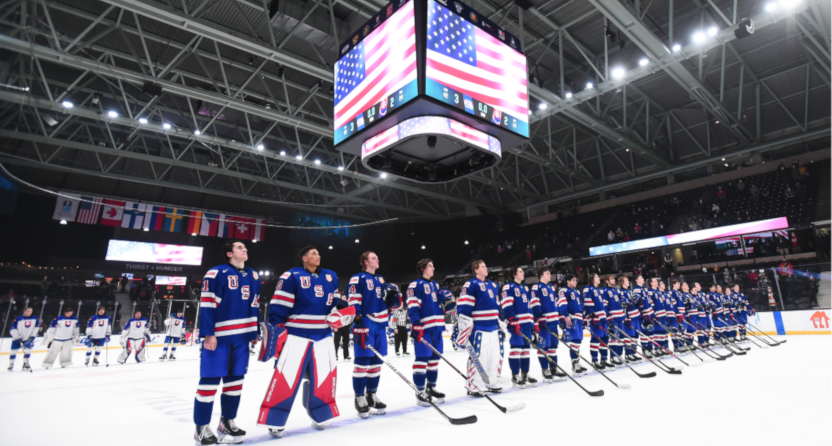 Last week, the International Ice Hockey Federation’s decision to proceed with the men’s U-20 world juniors while canceling the upcoming women’s U-18 world juniors (for the second straight year) took a lot of criticism. Now, only days into the men’s tournament (which began Sunday), it’s facing its own issues with COVID-19. The IIHF announced Tuesday that the U.S. team has forfeited its game against Switzerland after two players tested positive and the team went into quarantine:

BREAKING:@usahockey has forfeited their game against @SwissIceHockey due to a a mandated team quarantine following a positive test result of two of its players.

As per that release, that game will be recorded as a 1-0 forfeit win for Switzerland. And whether the U.S. team can return to play its next scheduled game (against Sweden Wednesday) will depend on further testing. Here’s more on that from Chris Peters:, who also discusses how the Swiss team has had their own COVID-19 issues:

How protocol worked pre-WJC: The Swiss team already had to go through COVID isolation protocol on Dec. 23 when Simon Knak tested positive. He retested, ended up with a second positive forcing 10-day isolation. Entire team went into quarantine from Dec. 23 to 25 after re-testing.

IIHF confirms now that the game will not be rescheduled. USA forfeits and will have to go through further testing to determine if they will be able to play against Sweden tomorrow. If they are unable, that game could also be ruled a forfeit. Their next game would be NYE vs. RUS https://t.co/3sh3aMwA7Y

Here’s more from Peters’ Daily Faceoff story on this:

With two players testing positive, Canada’s federal quarantine rules state that they’d have to isolate for 10 days. Though the CDC’s recommendations for isolation have changed in the United States to allow for a shorter isolation if vaccinated and asymptomatic, that does not impact Canada’s health regulations. Whichever players tested positive would likely be lost for the remainder of the tournament, based on previous protocol.

…According to a source with Team USA, everyone in the team’s traveling party “feels great” as in they’re asymptomatic. All players on Team USA are vaccinated as well, according to GM John Vanbiesbrouck in an earlier news conference, as was required for entry into Canada.

Team USA won its first game of the tournament on Dec. 26, 3-2, over Slovakia and currently sit in second place in Group B. Slovakia will be the only team in the group with no points after Switzerland is awarded a 1-0 win as a result of USA’s forfeit.

This is the first World Juniors game to be canceled over COVID-19 positives; some pre-tournament exhibitions were called off in an attempt to limit risks, but this is the first tournament game to go down. It may well not be the last, though. And that poses some issues for broadcasters TSN (in Canada) and NHL Network (in the U.S.). In particular, the U.S. team is the biggest draw for NHLN’s WJC coverage, so having them miss at least one game and possibly more is not great. And while losing a U.S. game isn’t as big for TSN as losing a Canada game would be, the U.S. is a notable contender here, so this would have been a decent non-Canada game for them. (And the World Juniors as a whole is absolutely huge for TSN, as the tournament is a much bigger deal in Canada than it is Stateside.)

The biggest question here may not be about this game, though. With a game forfeited over as few as two positives, there’s potential for a lot of further games to go down. And that may wind up having major impacts on the competition. Even if this is the only game that winds up canceled, that still has its own impacts; the Swiss gained three points from this and the U.S. gained none, so that’s a big deal for the group standings. Moreover, any further cancellations here will further increase the spotlight on the IIHF decision to try and go ahead with this tournament while canceling the equivalent women’s event (again). So there’s potential for even more criticism for them (and they’ve already received a lot) if the men’s tournament continues to hit COVID issues.