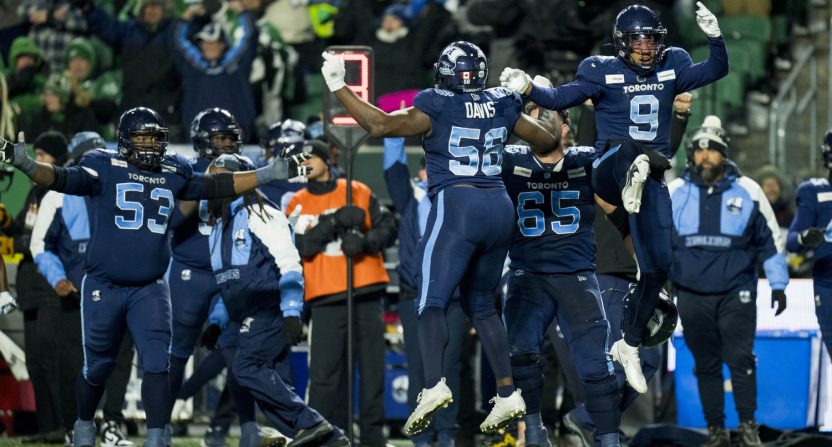 Sunday night’s 109th Grey Cup in Regina, Saskatchewan wrapped up with a remarkable ending. The Toronto Argonauts were up 24-23 on the Winnipeg Blue Bombers with 2:09 left in this Canadian Football League championship game, and had a 42-yard field goal attempt to make the Bombers need more than a field goal to claim their third-consecutive CFL championship. But Winnipeg’s Nick Hallett came up with an impressive block:

The Bombers then took over at their 29-yard-line following the block, which saw the ball only advance 11 yards and then get returned five yards by Winnipeg’s Brandon Alexander. And they looked almost immediately in trouble, with two-time reigning CFL Most Outstanding Player Zach Collaros only managing a short pass for four yards on first down, then getting sacked by Toronto defensive lineman Robert Smith for a loss of seven on second down. A third-down sack, also by Smith, looked set to create a turnover on downs, but he was called for a facemask on the play, giving the Bombers a new set of downs.

From there, the Bombers were able to pick up a first down thanks to a pass to Greg Ellingson. That set them up at the Argonauts’ 45 with 1:20 left, and they were able to get four yards closer thanks to a Brady Olivera run. Collaros’ second-down pass for Nic Demski fell incomplete, but that still left Marc Liegghio with a 47-yard field goal attempt.

A make there would have given Winnipeg a two-point led with less than a minute left, and even a miss that went through the end zone would have produced a game-tying rouge and possibly set up overtime. And Liegghio had made a 45-yarder earlier in the night, so he had plenty of range. But Toronto came out with the best possible outcome, a block from Smith:

MY GOODNESS, ANOTHER BLOCK!

Here’s another angle of that:

That led to the celebration seen at top, and it let Toronto take over and let quarterback Chad Kelly (who came in relief of injured starter McLeod Bethel-Thompson in the fourth quarter and set up a key touchdown) kneel out the clock. It marked the Argonauts’ first Grey Cup victory since 2017, and their 18th overall. And Smith’s late heroics were crucial to that:

.@FarhanLaljiTSN joins @JayOnrait to discuss the heroics of Robbie Smith, who made the game-winning block for the Argonauts in the #GreyCup. pic.twitter.com/nDtwYK2prA

It was quite the moment for Smith indeed. And it was particularly remarkable to see the second field goal block in two minutes, and one from the guy whose penalty earlier in the drive had kept the Bombers alive. But that life proved to be short-lived.