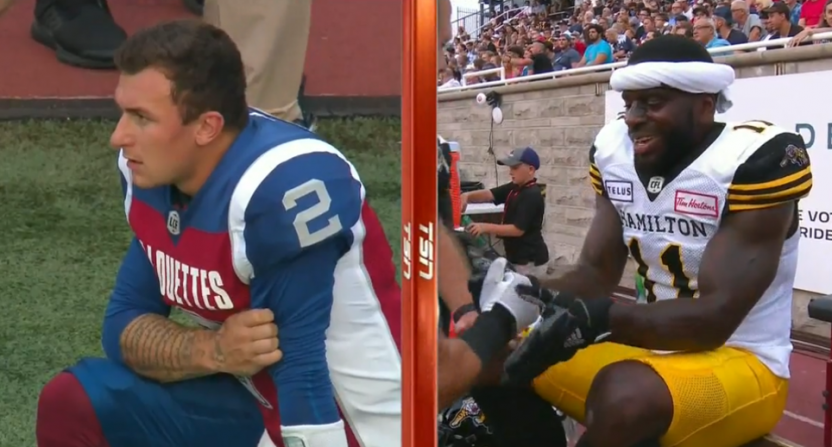 There’s been plenty of hype about Johnny Manziel getting his first regular-season CFL start Friday for the Montreal Alouettes, against his former team, the Hamilton Tiger-Cats. But the game (on TSN/ESPN2) it didn’t begin auspiciously for Manziel. First, Hamilton quarterback Jeremiah Masoli led the Tiger-Cats on a first-possession scoring drive, and then, after a toss to receiver B.J. Cunningham on a fly sweep led to a first-down loss of five, Manziel’s first regular-season passing attempt was picked off by Hamilton linebacker Larry Dean:

Here’s another look at that, showing Dean dropping into coverage and picking up the pick:

And a look from the ref cam, on referee Tim Kroeker:

Hamilton scored three plays later on a run from Alex Green, making the score 14-0 after the convert. And on Montreal’s next drive, a Tyrell Sutton run on first down picked up seven to make it second and three, but Sutton was stopped for a loss on second down. And Boris Bede’s punt was then blocked by Curtis Newton and recovered for a touchdown by Sean Thomas Erlington, making it 21-0 after the convert.

On Montreal’s next drive, Manziel was intercepted again when a blitz led to him tossing a last-second pass to Sutton, which went off Sutton’s hands and was picked by Jumal Rolle:

And Hamilton scored on that drive too, making it 28-0 before the end of the first quarter and tying a CFL record for first-quarter points. We’ll see if Manziel can pull some points back over the course of this one, but it certainly didn’t start well for him.

Update: And in the second quarter, after a field goal, Manziel got picked by Rolle again when throwing deep on a third-and-three gamble. But at least he made the tackle?

Update 2: And here’s his fourth interception, from later in the second quarter:

The Alouettes trailed 38-3 at the half.