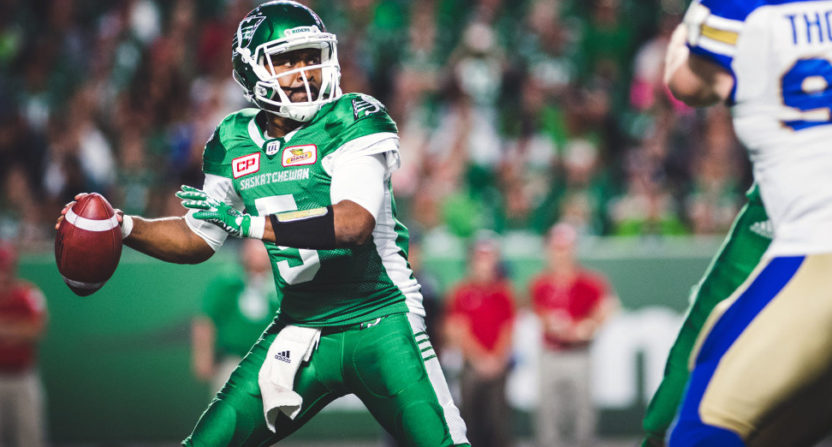 Quarterback Kevin Glenn has had quite the Canadian Football League journey since coming to the league in 2001 following an impressive college career at Illinois State. Heading into Monday, he’d been part of eight different CFL teams, and had even been a Winnipeg Blue Bomber twice and a Saskatchewan Roughrider thrice. And on Monday, Glenn (a free agent after being released by the Roughriders earlier this month) made a long-standing dream for many CFL observers come true by signing with the Edmonton Eskimos, the only current team he hadn’t yet been under contract for.

That’s right; one player has now been on each of the CFL’s nine teams. That’s a feat almost impossible in most leagues given their much larger size, and improbable even in the CFL, given how no one has done this before. And Glenn told Murray McCormick of The Regina Leader-Post a desire to make history as the first CFL player to play for all of the league’s current teams was part of his rationale for choosing Edmonton:

“This felt like the right situation for me,’’ Glenn said, adding he had offers from other teams. “The fact of being a part of history played a part in it too. At the end of the day, it came down to the best situation.’’

Glenn’s CFL career started with the Roughriders from 2001-2003, serving mostly as a backup. In May 2004, they traded him to the Toronto Argonauts for a draft pick, but he was only on the Argonauts’ roster for a few hours before being flipped to the Winnipeg Blue Bombers (for the third overall draft pick in 2005). Glenn went on to find some of his greatest success with Winnipeg, though, earning a nod as the East Division’s Most Outstanding Player in 2007 and leading the Bombers to the Grey Cup game that year. (Unfortunately, he broke his arm in the East Final and missed Winnipeg’s loss to Saskatchewan.) But after he struggled in 2008 and lost his starting job for a while, the team looked to move on the next season, releasing Glenn after trading for Stefan LeFors. (Yeah, that didn’t work out.) Glenn went on to sign with the Hamilton Tiger-Cats and had three pretty good years there before being traded to the Calgary Stampeders for fellow well-traveled quarterback Henry Burris in 2012, and he saw some success there; he initially entered as Drew Tate’s backup, but wound up starting much of the season, and led Calgary to the Grey Cup game later that year. (But they lost 35-23 to Toronto.)

Glenn entered 2013 as a backup to Tate again, and again was pressed into action thanks to injury, so he wound up playing in 15 of their 18 games. However, he was ineffective in the 2013 West Final (which Calgary lost) and was benched, and then left unprotected in that winter’s expansion draft, where the Ottawa Redblacks claimed him. However, Glenn only wound up on the Redblacks’ roster for a few months, as they brought in Burris once Hamilton released him and traded Glenn to the B.C. Lions for the fifth overall draft pick. This again led to Glenn coming in as a backup (to Travis Lulay this time), being pressed into regular starting duty once Lulay got hurt, and leading the team to the playoffs, but faltering there in a 50-17 loss to the Montreal Alouettes. B.C. didn’t renew Glenn’s contract in the offseason, and he wound up signing with Saskatchewan. Remarkably enough, Glenn again entered as a backup (to Darian Durant), but was pressed into action quickly when Durant tore his Achilles tendon in the first game, leading to Glenn starting the Riders’ first nine games.

Saskatchewan managed to lose all of those games, though, despite a decent offensive performance from Glenn. That led to them switching to younger players and focusing on the future, and to them trading Glenn to the Montreal Alouettes at the October trade deadline (for just a fifth-round pick this time). Glenn started some games for the Alouettes down the stretch, but couldn’t get them into the postseason. He then entered 2016 as Montreal’s starter, and started nine of their first 10 games, but they only won three of those games and Glenn was soon benched. He was then traded back to Winnipeg, spent the rest of the season as a backup there, was released in January 2017 and headed back to the Roughriders.

And now, after another season in Saskatchewan (where he was mostly a starter, but fell out of favor later in the year before regaining his job ahead of their playoff loss), the Riders released Glenn after bringing in Zach Collaros, leading to him heading to Edmonton. He’ll once again come in as a backup (to reigning CFL Most Outstanding Player Mike Reilly), but he’s been very useful in that role before, and has wound up seeing a lot of playing time. Even if he doesn’t see the field much, though, Glenn may still have an impact; the 38-year-old has a ton of CFL experience, and is sixth in league history with 52,867 passing yards, so he may have some tips to pass on to Reilly, and even more notably, to the team’s younger quarterbacks. And at the very least, it’s impressive to see Glenn complete the circle by signing with the only current CFL team he hadn’t yet been on.