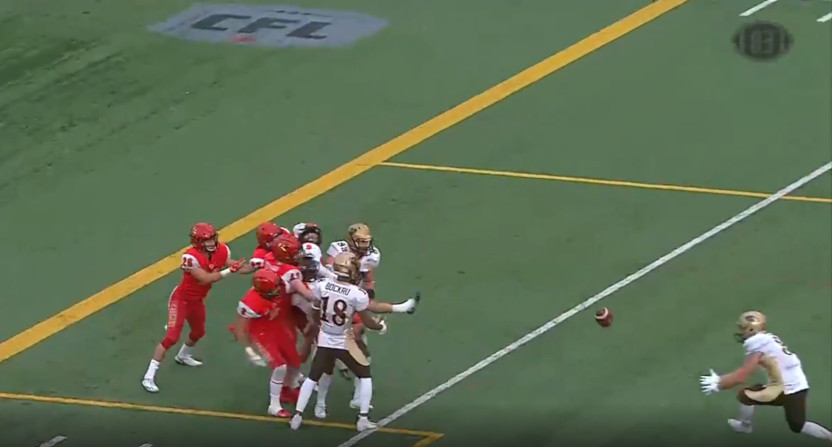 Saturday was quite the day for college football Hail Marys. In NCAA FCS action, the Dartmouth Big Green beat the Harvard Crimson 9-6 on a last-second Hail Mary, and north of the border in U SPORTS action in Canada, the 4-3 No. 10 Manitoba Bisons almost knocked off the 5-2 No. 8 Calgary Dinos on the road in the Hardy Cup (the Canada West conference title) semifinals thanks to a Hail Mary of their own.

Trailing 47-40 with six seconds left and the ball on the Calgary 50 (it’s a 110-yard field in Canada, so midfield is the 55 rather than the 50), fourth-year Manitoba quarterback Des Catellier rolled out and heaved a desperation pass from his own 52. That pass sailed 53 yards in the air to the Dinos’ five, where it was tipped, and then trailing Bisons’ receiver Tristen Dyce caught it and ran in for a touchdown:

Trysten Dyce catches it on the tip and it's a Bisons TOUCHDOWN! Bisons are going for two!#gobisons pic.twitter.com/IuMtDvVbLL

That’s an incredible sequence of events, and while Manitoba certainly didn’t draw it up that way, it worked out well for them. Flooding the right side of the field with four receivers at the last second was an interesting move (helped by Canadian football’s looser rules on pre-snap motion), and Catellier made a great throw to get this close to the end zone, but while Dyce’s catch and run was impressive, it can’t have been what was planned there.

Still, that was a great move from fifth-year receiver Dyce (son of long-time Canadian university and CFL coach Bob Dyce, he’s made plenty of amazing catches before), and a great outcome for the Bisons. And it should be noted that this is a team that’s produced some terrific talent over the years, including current New Orleans Saints’ defensive tackle David Onyemata. Unfortunately, their attempt to win the game on a two-point conversion didn’t go as well, but they did come very close to pulling the upset:

Heartbreaker. The two-point attempt goes through hands, and Calgary wins it. #gobisons pic.twitter.com/HIhzTT65t1

It probably made sense for Manitoba to go for two here, as that gave them a chance to win in regulation on the road against a higher-ranked team. Overtime likely would have favored (or favoured, if you’re Canadian) Calgary. Still, it’s somewhat disappointing that they came so close and couldn’t quite pull this off. They’ll always have that incredible Hail Mary highlight, though.