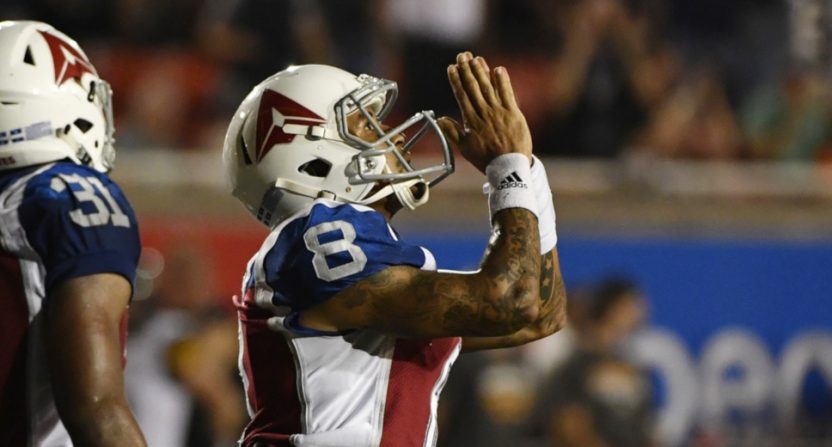 After six weeks of the Canadian Football League season, the Montreal Alouettes have produced plenty of off-field drama, but also plenty of surprisingly-positive on-field results. On May 31 (a day after the team’s first preseason game of the 2019 campaign), the CFL head office itself stepped in to buy the Alouettes from the Wetenhall family (who had owned the team since 1997) after months of searching for a new buyer didn’t produce one, and the drama continued June 10 (just five days ahead of the start of the regular season) when the team surprisingly parted ways with head coach Mike Sherman and promoted offensive coordinator Khari Jones.

And the biggest drama yet came July 14, when the Alouettes fired GM Kavis Reed the day after their second-straight win and didn’t provide a reason why. Reporting later came out that this was at least partly thanks to a months-long league investigation of alleged attempts by Reid to circumvent the salary cap. And that’s a pretty huge deal, and one that could still lead to on-field issues for the current team if penalties are handed down. But despite all that, the Alouettes have now won three games in a row (they beat the Edmonton Eskimos 20-10 on the road Saturday) to improve to 3-2, and their on-field product seems to be coming together just fine.

On the field, quarterback Vernon Adams Jr. (seen above during a 2018 game) has had a great start for Montreal. He’s in his fourth season in the CFL, but has already thrown a pass in a career-high five games this season (his previous totals were four, three and two), and he’s completed 73 of 111 passes (65.8 percent) for 1,027 yards with five touchdowns and two interceptions. He’s also been effective as a runner, running 33 times for 199 yards (6.0 yards per carry) and three touchdowns. And he caught a touchdown pass from receiver Eugene Lewis on a trick play in their last game.

Adams’ success is perhaps particularly remarkable, considering that he was third on the Alouettes’ quarterback depth chart for much of this offseason, behind Johnny Manziel (who forced his way out from the team and the league in February by violating his playing conditions so he could head to the AAF) and Antonio Pipkin (who got hurt in the Alouettes’ season-opening loss to Edmonton). While Pipkin returned to Montreal practices earlier this month, they seem to be sticking with Adams for now, and that seems to be working out for them.

Similarly, interim head coach Khari Jones seems to be doing just fine at the moment despite never having worked at that level before. Jones had a long and impressive career as a CFL quarterback from 1997-2007, and he’s been a CFL assistant coach since 2009 (both as a quarterbacks coach and as an offensive coordinator). And while Jones wasn’t the figure many expected to see as the Alouettes’ head coach this year, Sherman (who had a long coaching history from the NCAA and NFL, but no CFL background before entering as Montreal’s head coach last season) went just 5-13 with the team last year; they’re already looking more promising under Jones’ leadership, and Jones might pass Sherman’s CFL win totals before too long.

Of course, the off-field drama around the Alouettes isn’t particularly settled. The league still owns the team for the moment, which is always a bit of an uncertain situation, and while there’s been reports they’re close to a deal with Peter Lenkov (a Montreal-born producer/writer involved with shows including CBS’ revivals of Hawaii Five-O and Magnum P.I.) and his brother Jeffrey, they’ve reportedly been close to sales before. And the investigation into Reed could still have consequences for the current Alouettes, especially when it comes to how he allegedly distributed money to a player’s company (and then had that player distribute it to teammates) as part of an effort to get around the salary cap. And even further on-field success is far from assured; while Montreal’s been very impressive in their past three games, it’s a long season, and things can change quickly in the CFL. But for now, the Alouettes are rolling on the field despite all the off-field headlines.