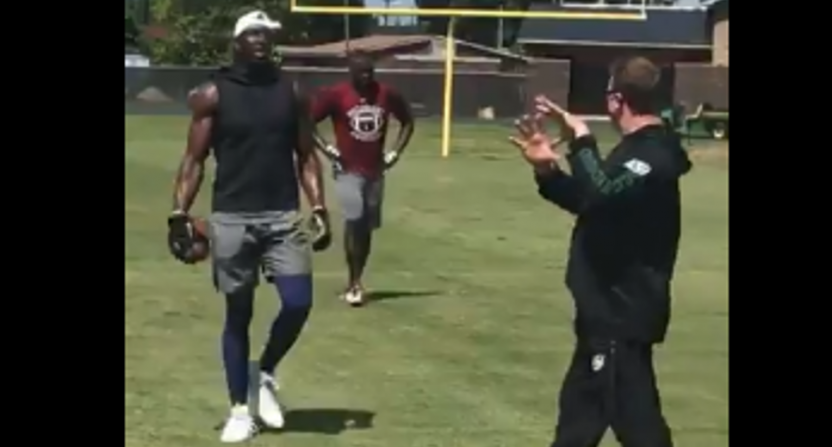 Much of the talk about Terrell Owens this week has revolved around his long-awaited induction into the Pro Football Hall of Fame Saturday and his decision to skip the ceremony in Canton, Ohio, which drew plenty of criticism from certain media figures. Well, a day after celebrating that induction at his alma mater (the University of Tennessee-Chattanooga), Owens took a step towards getting back on the field—a field in the Canadian Football League, that is.

Earlier this year, Owens was added to the Edmonton Eskimos’ negotiation list, then released after he activated the 10-day clause forcing the Eskimos to offer him a contract or relinquish his rights. On Sunday, Owens worked out for Saskatchewan Roughriders’ general manager and head coach Chris Jones in Jones’ hometown of South Pittsburg, TN (just outside Chattanooga). Jones (seen talking to Owens above during the workout) was back there during the Riders’ bye week, and held a workout for several prospects at South Pittsburg High School’s Beene Stadium. Stephen Hargis of the Chattanooga Times-Free Press has more on Owens’ involvement there:

“I know I’m truly blessed and I can still play the game,” Owens said after the workout. “What I did out there today is just a small little snippet of what I can do. I just appreciate Coach for the opportunity. I guess he wanted to assess and see where I am physically.

“It’s key when you’re trying out to put your best foot forward, and I’m very pleased with what they saw and what I did out there. To be inducted into the Hall of Fame and come back and play, why not me? I know I can do it; it’s just a matter of someone giving me the opportunity.”

…”I wanted to see him run a lot of different routes and work him out for a while to test his stamina,” Jones said. “I know he can still fly on the track, but I wanted to see if he could consistently run his routes or if he got tired. I have tryouts whenever it’s possible so that former college and pro athletes have the chance to prove themselves and see if they can improve our team. But I’ve never been faced with anything like this. I mean, he’s 44 years old but still runs a 4.4-second 40.

“An agent reached out to me to say that T.O. was interested in a tryout. I gave him the dates we would be available, and it just happened to work out that the timing was perfect for him since he was in Chattanooga for his ceremony. I told him it would be better to come here for the tryout because there wouldn’t be the media frenzy that would be created if he crossed the border to work out in Canada.”

Those comments are notable, as they illustrate how it’s anything but a sure thing that this will actually lead to a CFL contract for Owens. As we noted when the Eskimos added Owens to their negotiation list, there aren’t many players who have made an impact in the CFL at 44, and Johnny Manziel’s struggles this week help to illustrate how it’s far from sure that a big-name American player will quickly dominate the league. And while Owens was a NFL legend, he last played in that league in 2012 with the Seattle Seahawks, but didn’t make it out of training camp. So while he’s got speed left, he’s not particularly in game shape.

But Owens’ career success and his still-there speed certainly help to explain why a CFL coach and GM would want to take a look at him. And that’s especially true considering that said coach was in the area anyway.. Here’s video from Hargis of Owens running a route against former South Carolina cornerback Rico McWilliams (the former South Carolina/Southeast Missouri State cornerback who tried out for the Washington Redskins earlier this year) and catching a pass from former UCF quarterback Justin Holman:

Hargis also noted that Owens helped push McWilliams during his own 40:

One of the cooler moments today by @terrellowens was taking time out of his tryout to run alongside former South Carolina DB Rico McWilliams to help push him during his 40 time. McWilliams was also trying out for the @sskroughriders. HC Chris Jones noted what a pro move that was pic.twitter.com/s29bP1iIYX

We’ll see if this winds up leading to anything for Owens and the Roughriders. Jones has made some splashy signings of NFL veterans who haven’t played in a while before, such as Vince Young last year (Young wound up being cut following a torn hamstring in training camp), and while he told Hargis Owens has work to do, there might still be some interest there:

“He and I are going to speak and decide exactly how he wants to handle it. He’s got some football shape stuff that he’s going to have to get into. He caught the football well today, he got in and out of his breaks decent, football-wise he’s got a ways to go.”

That’s not the most emphatic endorsement, but it’s also not a hard pass. And if Owens really is serious about playing again, it’s not inconceivable a CFL team could take a chance on him. Whether he’ll produce at any sort of level justifying the media circus that would create is debatable, and history isn’t exactly on Owens’ side there; the most similar recent example might be Chad “Ochocinco”  Johnson, who didn’t produce a ton for Montreal in 2014 (seven catches for 151 yards and a touchdown in five games), and he was only 36 at the time. The CFL’s a strong level of competition, and Owens isn’t automatically going to conquer it.

But this workout is notable, as it shows more interest in the league from Owens than we’d seen before (it was the team who put him on the negotiation list, and while activating the 10-day window maybe showed a little interest, that’s far from a definite “I want to play.”,) and it shows some actual interest from a CFL team. An in-person workout is a bigger deal than adding someone to a negotiation list, even if Jones was going to be in the area anyway. And maybe Owens is motivated to play again after all of the criticism of him skipping the Hall of Fame induction, and maybe the Riders (currently 3-4, fourth in the CFL’s West Division, and averaging just 21.6 points per game) could use offensive help enough that they’re willing to get unconventional. We’ll see if this adds up to anything, but it’s a story to keep an eye on.

[The Chattanooga Times-Free Press; screengrab from Stephen Hargis on Twitter]